On Sunday night we entertained some fellow Queensland transplants with homemade pizza. Mike and Marissa were fellow maths/ecology students at UQ, also now at the University of Melbourne. Mike’s girlfriend, Jo-Lyn, contributed beer, red wine, sharp conversation and steered us away from too much geek-talk.

I started making the pizza bases a few hours before their arrival. My favourite recipe uses dry yeast and requires an hour or two of resting, so you really need an afternoon at home to flit between dough-making and other activities. On weeknights we usually go for wholemeal pita bread instead unless I’m ‘working from home’. This recipe is adapted from one that appeared in the Australian Magazine last year. The base is quite thin and crisp, but using wholemeal flour gives a bit of substance as well as nutritional value.

Combine the yeast and water in a large bowl, add half the flour and mix well. Add the oil, salt and remaining flour. Introduce the rest of the flour gradually in case you don’t need all of it. Lightly flour a bench and knead the dough for about 5 minutes, until it becomes smooth and elastic. Wash, dry and lightly oil the bowl, put the dough in and cover with a tea towel. Let the dough rest for an hour, or until it has roughly doubled in volume. Divide the dough into two balls back on the bench, cover them with a tea towel, and let them rest for a further 20 minutes. Roll them out on the bench, sprinkling around extra flour as needed, into circles about half a centimetre thick.

When I offered around tea and coffee afterwards, I was thinking more about the fresh tray of butter pecan turtle bars, and a gourmet chunk of Max Brenner chocolate with hazelnuts that Marissa brought along. Yum! 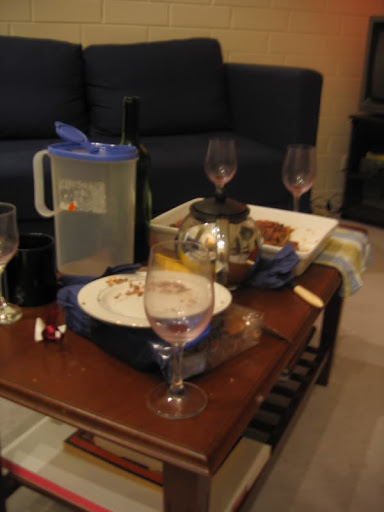 I suppose this blog is a record of the less spontaneous things we enjoy, because as soon as we’re sharing good food and talk with others we forget to pick up the camera. (It’s not out of respect for their privacy that the faces of Krusty and Jason, Mike, Jo-Lyn and Marissa don’t appear, oh no.) I also forgot to prepare the salad or use some roast veges on the pizzas. Better a rolling evening than a rigid, well-recorded one, eh? The blurry dregs were largely dealt with by the dishwasher, and we’ve got a fridge full of leftover pizza, toasted sandwich and salad ingredients and sugary treats. What a great, late start to the week!

Categories:
Posted by Cindy at 9:14 pm