Starting work this week put paid to my cooking enthusiasm and left Cindy to prepare numerous culinary delights while I lounged on the couch. Sunday night was my chance to make up for my laziness and to make sure Cindy was enthused about it, I chose something based on pastry. Normally pastry cooking is Cindy’s responsibility, but I figured I could take on a simple pie crust to prevent domestic tensions mounting. Thankfully the recipe 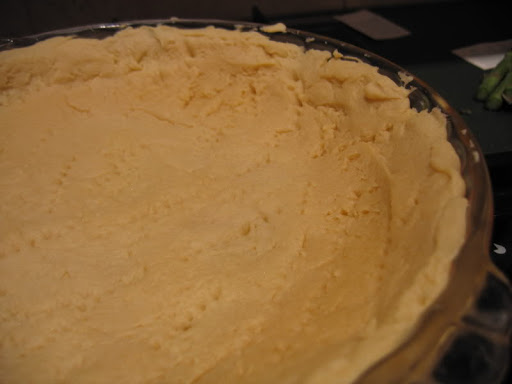 for the meal of choice was relatively straightforward, and was made even easier when Cindy taught me the joy of pastry making in a food processor. A pile of flour, some butter, a pinch of salt, a dash of vinegar and an egg yolk (the shortening mentioned in the recipe was too difficult, so I ignored it) thrown into a food processor and whizzed about until it all looked like dough (I went a bit light on the water too from memory). It really couldn’t be much easier. So with my perfect pie crust in hand, it was on to the filling. 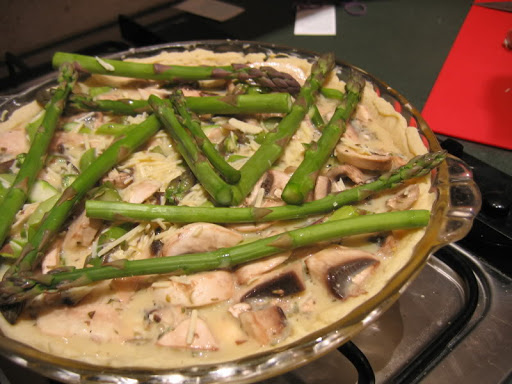 The recipe suggested half a cup of mushrooms, but I think I ended up with almost triple that (trying to convince myself that there was something healthy about the whole meal), combined with the asparagus, eggs, cheese and herbs. Once it was all whisked together I poured it into the crust, somehow managing not to overflow it all over the kitchen, and decorated the top ‘artistically’ with the remaining asparagus. Delightful.

Into the oven it went, but due to the manifold complexities of our fan-forced beast, the cooking time ended up approaching somewhere around an hour instead of the 30 minutes suggested. Still, it came out looking perfect and went down a treat with some fried up veges and a big pile of greens.

Categories:
Posted by Michael at 8:28 pm