After heading out on Friday night, we’d spent the rest of the weekend lounging about the house cooking and doing various other chores (slowly trying to finish off all the moving-in related tasks – we’ll still be tidying up and unpacking the last dribs and drabs in December at this rate). So come Sunday afternoon I dragged Cindy out of the house to go and explore St. Kilda. 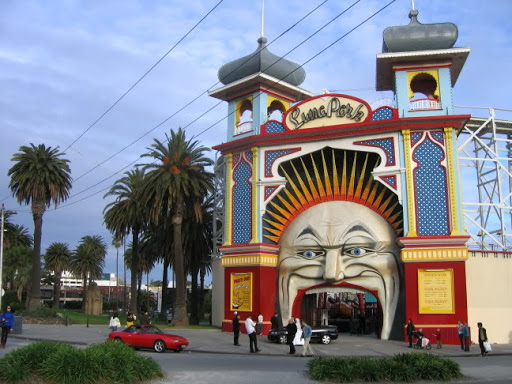 Of course we’d have to find lunch somewhere on our travels and our Cheap Eats guide pointed us in the direction of quite a few veg-friendly options. After a brief wander, hunger got the better of us and we settled on Soulmama, right on the waterfront in the St. Kilda baths complex. 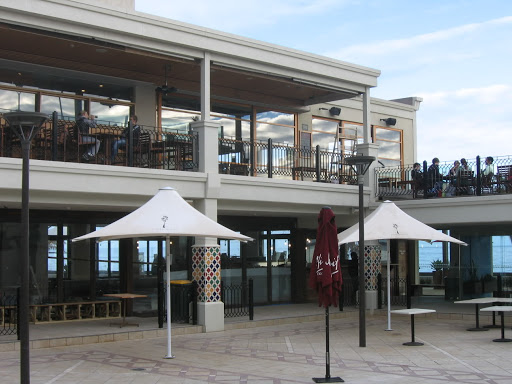 Even at 3 o’clock, the lunch crowd was considerable with tables full of trendy young families. Given the location and well-healed clientele, I was surprised to discover that the food was a self-serve Krishna-style affair. We ordered medium bowls, giving us four options each from the bain-marie down the front. Thankfully, given the prices ($21 for a medium-bowl plus dessert), the food was a little more sophisticated than the usual hotbox fare. 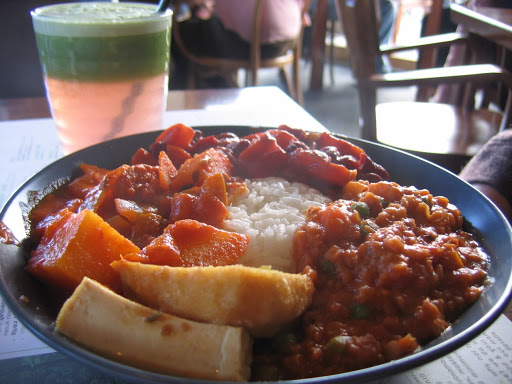 I opted for satay tofu, Malay-style tempeh, Mexican bean stew and spiced lentils with jasmine rice. The tofu was chewier than I expected, and I would probably have been satisfied with just one piece rather than the two big chunks I ended up with. The remaining three dishes didn’t disappoint though: the Mexican bean stew was chock full of beans and vegetables (zucchini, capsicum and carrot) in a creamy and slightly peppery tomato sauce, while the lentil mix and the tempeh were both deliciously spicy. By the time I’d gotten through my bowl I was starting to regret the decision to include dessert in our order. Thankfully, I had time to recuperate while Cindy polished off her meal. 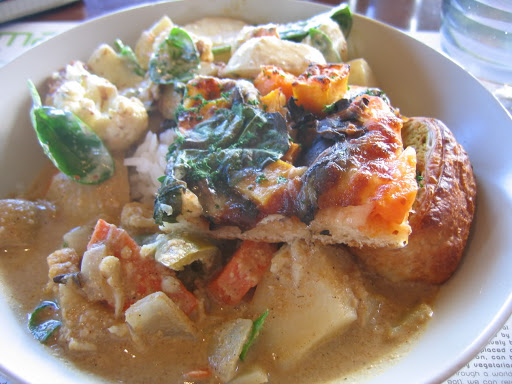 Cindy writes: For lunch I had picked out pizza, vege korma, a lentil roll and some potato salad. The pizza slice had a great base - crispy on the bottom, soft and bready on top – and it’d be great if they’d make larger ones to share as a meal. The korma wasn’t quite as fatty and creamy as my favourite versions but it was probably a lot better for me. It had a nice cardamom flavour and was very good anyway, especially when mixed into the fluffy rice. The lentil roll had a smooth texture and more curry flavour, and the potato salad was fantastic: it included bites of cauliflower, carrot and roast pumpkin, baby spinach leaves, and a creamy dressing with wholegrain mustard. (I’ll definitely be trying to reproduce that one at home.) While the food was all very well prepared, I prefer not to pile my plate with mismatched samples. I’d probably rather a more conventional menu, or even a smorgasbord where I can return for small plates at my own pace.

The dessert menu was more creative than most, and we took quite some time deciding what to order. We each had to make sure that the other person was ordering something that we wanted to try, but not something that we’d like more than our own order. Michael had a chocolate espresso pot, which was as smooth and decadent as you’d expect. I ordered a roast hazel and macadamia chocolate meringue torte, which thankfully wasn’t as over-the-top in size as it is in name. I love textural variety in my food and this clash of crunchy/chewy/smooth made every mouthful new and interesting. It was very sweet, but the roasted nuts were also a dominant flavour. The torte was a bit dry and it would have been perfectly balanced by a small scoop of ice cream. Instead of ice cream, I had ordered honey pistachio yoghurt at the recommendation of a waiter. It would make a great mini-dessert or perhaps a pairing for an Indian-style dessert.
Given the price of our long lunch, I’m not in any rush to revisit Soulmama for another meal. But I’d certainly like to work my way through the dessert menu. It’d also be a great venue for some cocktails and snacks on a Sunday afternoon, looking out to sea. As the weather improves I expect it will become increasingly difficult to get a table with a view. 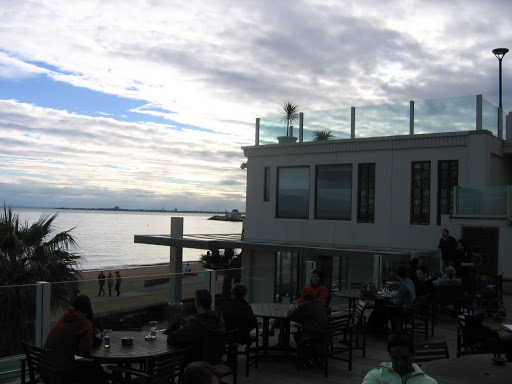 Updated 11/7/2011: Soulmama has closed down. It had its detractors, but it's hard to imagine
a vegetarian restaurant with a better view.

Updated 1/1/2012: Soulmama has reoponed! It's just up the road on Fitzroy Street now and has lost its view. Black Bunny Carousel has the details.