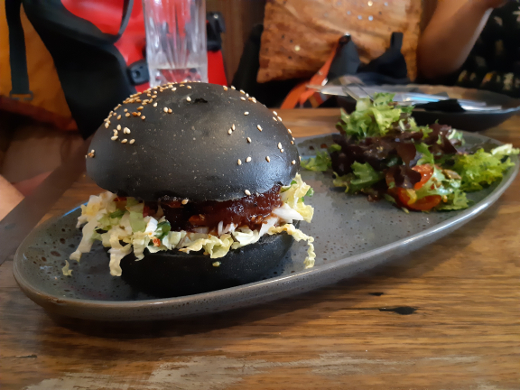 We're blessed with abundant vege burgers in Brunswick, so it's taken us a while to venture north to the Merri Clan and try theirs. Burgers are the core offering on the all-vegan evening menu, with six different fillings ranging from mock-beef to jackfruit and tofu. There are gluten-free buns, a burger bowl and nachos available for those who can't or don't want to have the full gluten-fueled mock-meat experience.


The most popular order at our table was the Korean Fried Chick'n Burger ($17, pictured above). It's drenched in sticky, just-spicy-enough sauce and augmented with tangy kimchi, slaw, peanuts and fried shallots. 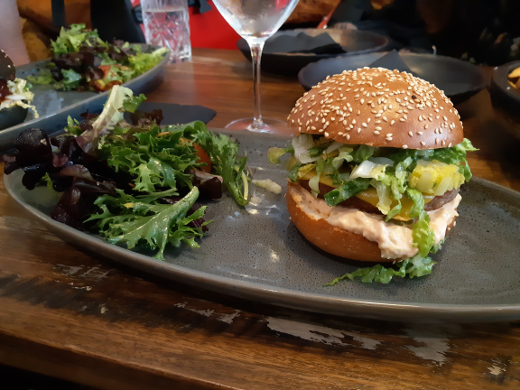 I was just as pleased with The Little Mock Burger ($17, younger sibling to The Big Mock Burger): a dense salty mock-beef patty and a light bun with excellent, copious special sauce and pickles. On a hot summer night, I was glad for the extra greenery on the side. 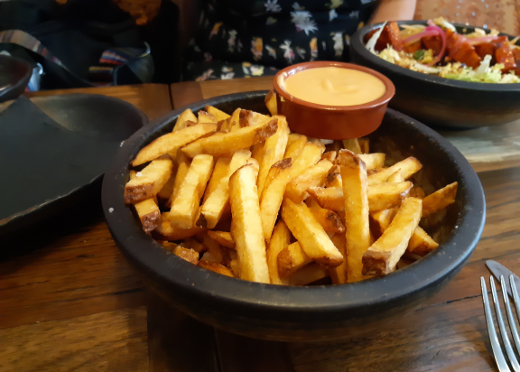 That's not to say we didn't try the fries! We ordered a needlessly large ($9) bowl for the table, with chipotle lime aioli ($2). They're a solid support act; I liked that their skins were still showing.


Though we don't actually need to travel more than a block for a good burger, we'll go the extra distance and extra dollars to eat these ones again - the Merri Clan burgers are among the best we've had.
____________


You can read about our previous visit to the Merri Clan here. Since then it's been positively reviewed by messy veggies.
____________


Accessibility: There's a flat entryway and a reasonably spacious interior. The outdoor area is a hodge podge of different tables and chairs, with a clear corridor through the middle and one small step. Toilets are good, including a unisex and fully accessible cubicle.
Posted by Cindy at 9:33 am 1 comment: 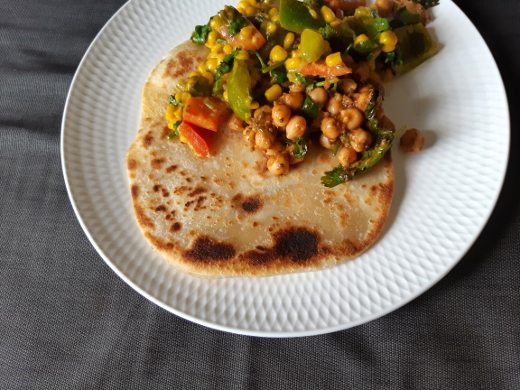 I wanted to welcome Cindy back from Brisbane with a tasty dinner. I went old school, cooking up these two old favourites. I added one new component to the meal - some home made breads. I put the call out on twitter for easy roti recipes and Ruby suggested this recipe. These aren't particularly authentic roti-wise, but they're incredibly, incredibly easy. There's no yeast, no eggs, no mucking around - just some kneading, a bit of patience and then a couple of minutes frying. The results were fantastic! Soft, pliable and delicious; the perfect vessel for our spicy chickpeas. We'll definitely make them again. 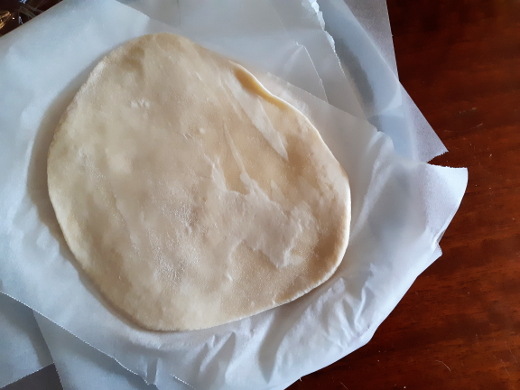 Soft flatbread
(from this recipe on RecipeTin Eats)

Melt the butter in a small saucepan and combine it with the milk.

Pour it in to a bigger bowl with the flour and salt.

Stir everything together until you get decent dough ball. Knead the dough for a couple of minutes and then leave it, covered, for half an hour or so to rest.

Cut the dough into four equal pieces. Roll each one out into discs about half a centimetre thick. Fry quickly in a non-stick pan with a spray of oil - about one minute on each side.

Serve immediately.
Posted by Michael at 8:45 am 2 comments: 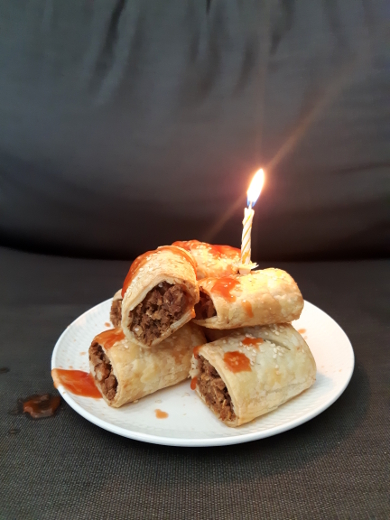 About 13 years ago, a friend shared with us a recipe for 'Liz O'Brien's non-sausage sausage rolls'. These vegetarian pastries were a wonder! Simple but unexpected ingredients like rolled oats, soy sauce, pecans and cottage cheese turned out a mock-sausage roll that had all the comfort and none of the gristle-risk of the meaty ones that I'd occasionally buy from the neighbourhood bakery.

Within a few years I had streamlined the recipe for my own convenience, and veganised it for my friends'. Today, ten years on, this is the version that's really stuck! It's still the most visited post on this blog every month, and it's been reblogged countless times by others. Commenters tell us about the veg*ns and omnivores they've fed it to, and the alterations that work for them: using different nuts, sneaking in mushrooms, chia seeds, tomato paste, herbs, or a dash of Vegemite. (Our fave is Lisa's tip on replacing the breadcrumbs with a crumbled Weet Bix, which we always have in the house.) Vicki Vegan even figured out a gluten-free version. In 2018, perhaps all that remains is to roll them into a festive wreath shape.

For all that, we reckon this original formula might still be the best. Happy birthday to these delightful little morsels.
Posted by Cindy at 7:17 am 3 comments:

A few bites in Brisbane 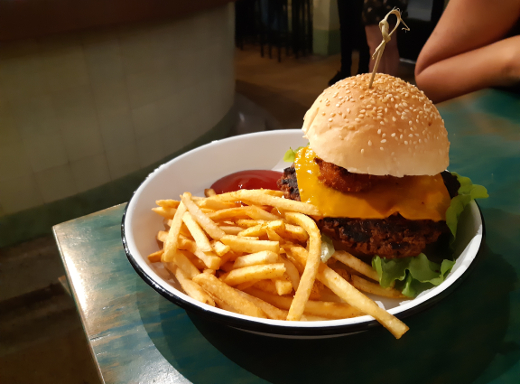 I've been back in my home town of Brisbane! It's now more than 12 years since I've lived there, and the Bowen Hills neighbourhood where I was based is unrecognisable. Thankfully Susan of Kittens Gone Lentil is still posting regular updates of vegan eats around town, and most of my choices were inspired by her online recommendations.


First up, I stopped in at Netherworld. It still has the architectural bones of the pub I've always known in this spot but it's been transformed into a low-lit, loud-music pub full of arcade games. The American diner-inspired menu has a vegan baseline, with options to add dairy and cheese on many dishes. I ordered a nice, house-made lemon soda and decided to check out their classic vegan cheeseburger, called the Burgatory ($14), with a side of shoestring fries ($3). This was a solid, salty mock-meat burger, tending towards the mushy-messy, and I liked the onion rings they snuck inside. The fries were pretty good too!
____________

I got the word on I Like Ramen from a sharp-eyed vegan colleague. This eatery has been open in Brisbane only a little over a month and is completely 'plant-based'. I was picturing a small counter with just a few stools to perch on, but actually this is another sprawling pub-like environment. I boldly eschewed the ramen bowls and tried some more bunly food. First, a holy 'duck' bao ($8) with excellent crispy edged mock-duck and saucy 'slaw, but not all the subtlety of plum, mint, chilli and pomegranate that I was promised.

I was nervous that the panko mushroom po' boy ($13) smelled so strongly of seaweed, but the flavours and textures in this roll were actually well balanced: the mushrooms were juicy but not too drippy, with thick crunchy panko crumbs, nestled in with more slaw. I had no regrets, even though I knew I had no room to try Doughlord down the street.
____________ 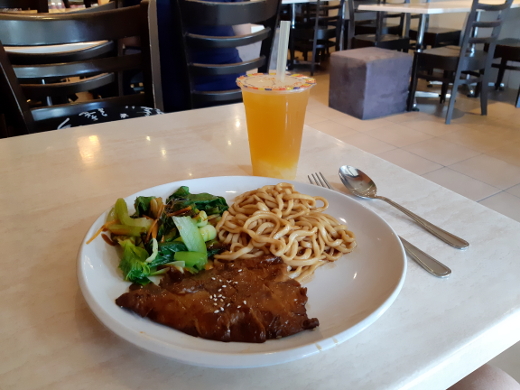 My trip to Tea Master was a spontaneous nod to nostalgia on my day off. I loved the vegetarian roasted duck noodle ($11.80): the mock meat was thick and fatty, the noodles had a dark sesame oil flavour, and the greens were sauteed in a sweet and salty soy sauce. My pineapple green tea ($3.70) with lychee jelly ($0.50) was indistinguishable from any other bubble tea I've ever ordered here - sweet and fun, but not flavoured with any precision.
____________ 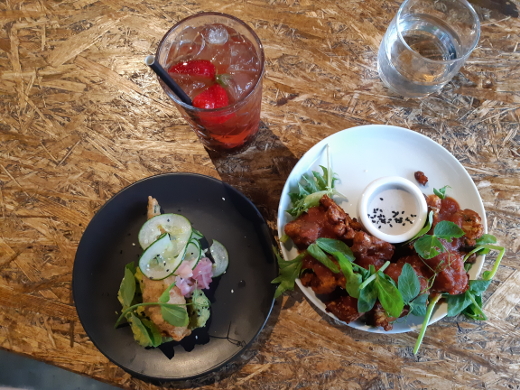 I took myself out on a date on Friday night, picking out the vegan Greenhouse Canteen for dinner. It's got a light, instagram-wellness vibe, and friendly staff that were happy to squeeze in an early table for one. I was #blessed with a choice of house-made sodas again (not just kombucha!), and really liked the strawberry and balsamic one ($9). The zucchini flower stuffed with almond fetta ($8) was also a stunner, set on a pillow of broccoli puree with a refreshing garnish of cucumber and pickled onion. The cauliflower wings ($14) were less impressive, lacking crispiness and spiciness.
____________ 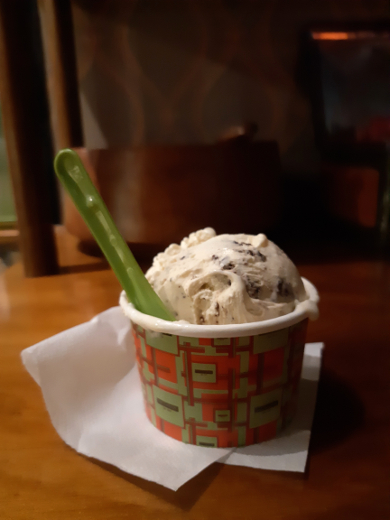 I rounded out the night with a Malt Brownie scoop ($5.30) at Gelato Messina. This is no Brisbane original, of course, but it's a chain of great quality gelato that I'm glad to eat in any city I encounter it. This special edition flavour was everything I hoped for, tasting unmistakably of malted milk powder, with a couple big cubes of soft brownie stirred in.
____________

On this visit, I really felt the time and distance between me and this sunny city... but this wasn't sad at all! Rather, I enjoyed the changes I observed, getting to know what Brisbane has grown to be instead of looking for what I knew it once was.
Posted by Cindy at 9:48 pm 2 comments: