When we left Brisbane, Cindy was given this book as part of her going away present and I finally decided it was time to try out one of the recipes. Most of the vegie recipes seem to be intended more as side dishes than as fully balanced meals and I think the idea is to make a couple of different dishes and feast on the variety. However, given it was a school night, I decided just to adapt the Cauliflower and Potato Mangalore in the book into something with a few more colours in it. This was all further complicated by the presence in our fridge of a big pile of roast vegies from Cindy’s crazy cooking weekend. Anyway, let’s just jump straight to the recipe.

1. Fry the onion in a good splash of vegie oil until it goes soft and then put it aside
2. Fry the chillies, coriander, mustard and fenugreek seeds, peppercorns, cinammon stick and cloves for about a minute
3. Put the onion and spices, turmeric and cumin powder and tamarind concentrate into a food processor and whiz them merrily until they’re all smooth and pastey.

4. In a large saucepan, fry the garlic and ginger in some more vegie oil for a few minutes. Add the spice paste and fry for a few more minutes. Add ½ cup of water, the coconut milk, roast vegies, broccoli, beans and a pinch of salt.
5. Cover and simmer, stirring occasionally, until the liquid thickens up a bit and the pumpkin all but disintegrates (about 15 minutes).

Serve with rice and, if you’re lucky, home-made chapatti. 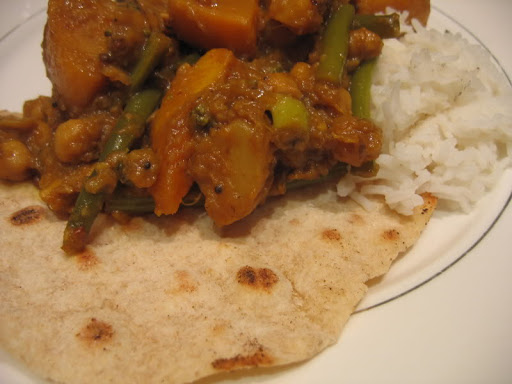 I think I overdid it a bit with the tamarind concentrate and underdid a few of the spices, so the curry tasted mostly of tangy tamarind, which wasn’t really a problem, but something to keep in mind for the future.
Categories
Posted by Michael at 3:45 pm