After a couple of virtuous lunches and dinners dominated by salad, it was time for some fried cheese. I previously praised haloumi in my last days of cabin fever in remote Sweden, where the delis are few but high quality dairy products are abundant. I think haloumi is at its best straight out of the fry pan, where a bit of olive oil has seared the outside golden, hot and a bit oozy with cracked pepper and a big squeeze of lemon juice on top. But there are better ways of making a meal of it than piling your plate with six such slices. You can treat a big slice as a burger patty, for example. We layered Turkish bread with home-roasted capsicum (no oil), grilled zucchini, fresh basil and baby spinach, then the haloumi with lemon and pepper. On the side are potato chunks baked in the oven with olive oil, salt, pepper, and some rosemary left over from the stock-making (thanks to Grill’d for that idea). Make two sandwiches per person and the next day’s lunch is sorted! 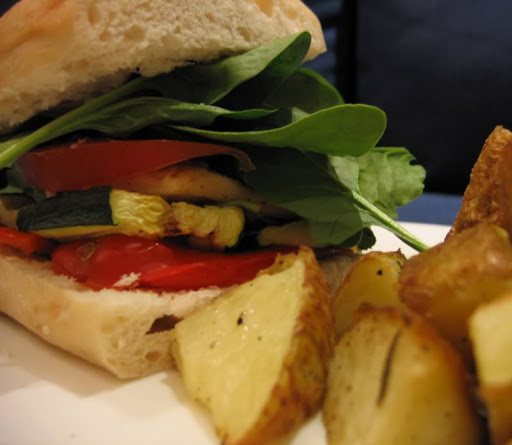 Categories
Posted by Cindy at 6:19 pm