In his omnivorous days, meat pies were one of Michael's guilty pleasures. I developed this recipe for him after we went veg and I discovered TVP (textured vegetable protein). TVP comes as dried up flaky bits, and is made mostly of soy flour. 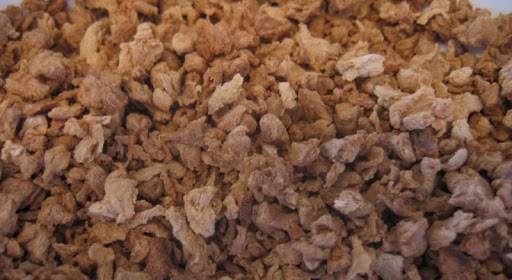 When the flakes are soaked in water they fluff up into a pretty convincing substitute for beef mince. They don't taste meaty, exactly, but mince is so often hidden in sauce or other flavours that I reckon it'd do the job almost all the time. I've had a couple of omnivores comment that they wouldn't have picked the difference in this recipe if they hadn't known I was vegetarian. You can get Sanitarium brand TVP from most supermarkets, and some health food shops sell other brands of it too.
I was going to submit this recipe to the "We Do Chew Our Food" pie review, but I wanted to post it here because it's one of the dishes of which I'm most proud. I invented it from scratch!

Mix 1 cup of TVP mince with 1 cup of hot water, and set it aside to fluff up.
Finely chop a small onion, and about a cup of mushrooms. Mince or chop 3 cloves of garlic.

Heat 2 tablespoons of oil in a reasonably large saucepan. Cook the onions and garlic until the onion starts browning. Add a tablespoon of flour and keep stirring so that it doesn't stick to the bottom. Next you need about 2 cups of liquid: try any combination you like of stock, red wine, milk or plain ol' water. Keep stirring for a bit, and the liquid should thicken. Next flavour that gravy up: try vinegar, soy sauce, sesame oil, worcestershire sauce, chopped herbs. There's gotta be black pepper. Make sure you taste it and adjust the flavours to your preference.
Now that you know how to make gravy, I'll tell you that you can just buy a sachet of Gravox and add hot water. It sure ain't any worse than what you'll get in a meat pie.
Take the gravy off the heat and stir in the mushrooms and the TVP. Set the oven to 200 degrees. 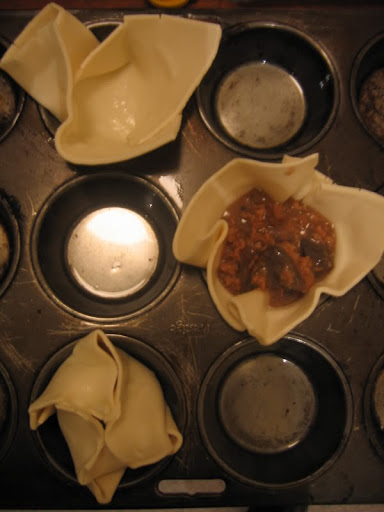 Thaw out three sheets of puff pastry. I'm thinking of the standard ones that are about 25cm x 25 cm, at the supermarket. Grease up a muffin tray, then cut the pastry sheets into four squares each. Gently mold the pastry squares into the muffin cups and spoon about 2 tablespoons of the mince mix into each one. It's tempting, but don't fill them up too much or they'll overflow in the oven. Fold up the corners and pinch them together a bit, but allow some gaps for steam to escape. If you've got little pie dishes or you want the traditional flat-top look, go ahead: I just find this approach easy, it doesn't waste any pastry, and I don't need to buy any extra dishes. Bake the mini-pies for about 30 minutes, or until the pastry is golden and a bit flaky. If you haven't experimented and got the filling levels right, consider putting an extra tray under the muffin pan to catch any overflow. 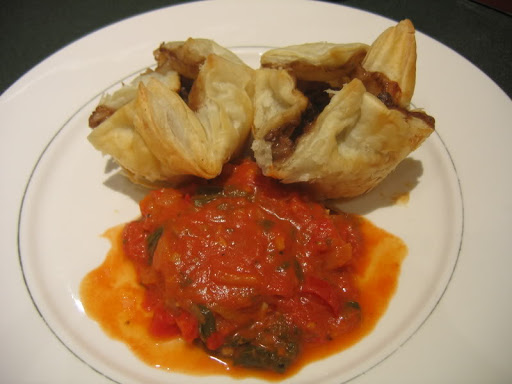 Serve with lots of sauce! We are a divided household on the sauce issue, with Michael preferring Worcestershire. I'm more of a traditional tomato girl, myself. This time I still had some home-made arrabbiatta sauce in the freezer as a slightly gourmet treat. Our favourite sides are garlic mashed potato and wilted spinach leaves. 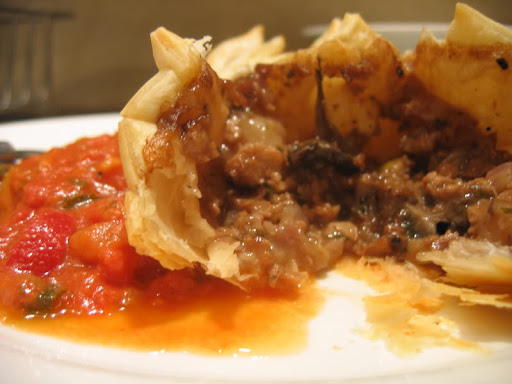 It's official: vegetarianism is no longer unAustralian.

Categories
Posted by Cindy at 7:38 pm