Our original inspiration for going veg was sharing a home with newlyweds Todd and Madhura in Ithaca, NY during 2004. Madhura was a PhD student in the same department as me. After their wedding Todd moved to Ithaca and, since he hadn’t found a job yet, proceeded to fix up the house and cook outstanding vegetarian dinners. It was really his creativity that convinced us that we would never get sick of eating meatless meals. After many years of eggplant-suspicion following a bad Home Ec experience, Todd’s rendition of eggplant parmigiana persuaded me to give this vegetable another go. This is a really flexible recipe in that you can choose to use pre-packaged or made-from-scratch ingredients as you wish.

2. If I’ve learnt one thing from Ready Steady Cook, it’s this: Peter Everett is as camp as a row of tents. The second thing I’ve learnt is that fresh eggplant doesn’t need to be cooked to leech out the bitterness, but old ones do. You can tell an aging eggplant by its dark seeds. You shouldn’t be able to see the pale seeds in a fresh eggplant. Nevertheless, I like my eggplant to be falling apart with mushiness, so I usually boil the slices for 5-10 minutes at this stage.

5. Now you need some tomato-y sauce. Usually I just use a bottle of pasta sauce, but this time we had lots of leftover arrabbiatta sauce after making sausage rolls so I used that instead. If you like lots of sauce, spread a bit on your baking dish first. Next lay out the eggplant slices in rows, overlapping a bit but not too much. Pour a thick line of tomato sauce along each row and top with grated cheese. I usually use parmesan but this time I used up some leftover mozzarella too. 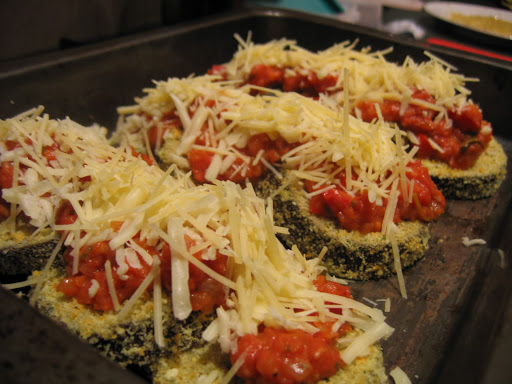 6. Bake it in the oven at 180 deg for about 20 minutes. If you didn’t pre-boil the eggplant you need to make sure it’s cooked through. Sometimes I put the tray under the grill for that last few minutes to get the cheese golden brown.

7. Serve with potatoes, bread or rice and lots of greens! We had leftover turnips and silverbeet from the night that we cooked sausage rolls. 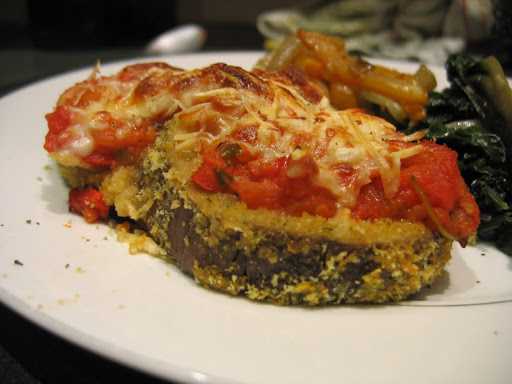 I recently read that the traditional Italian way to do this is to fry the crumbed eggplant slices (definitely skip the pre-boiling) and then go straight to the grill instead of oven-baking them. Leftovers are an excellent next-day lunch! Make a sandwich with fresh greens and maybe a bit of extra cheese. If you’re not pre-packing then I highly recommend re-heating the eggplant before assembling the sandwich.

Categories
Posted by Cindy at 10:16 pm