On Sunday afternoon Michael and I took a walk around Carlton and Brunswick after a weekend spent largely indoors. The calendar and the trees have announced that spring is here, but the weather is still just as often cold and windy as it is sunny and cheerful.

After about an hour of pounding the pavement and 28 hours without eating out, we convinced ourselves that we could indulge in a hot chocolate at Koko Black. (This is where Michael bought my bet-winning chocolate.) 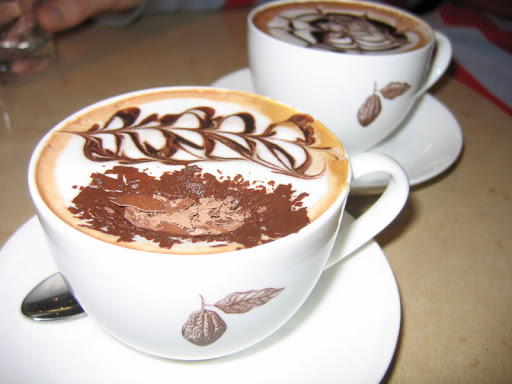 Uncharacteristically it was Michael who chose the traditional hot chocolate while I elected for the additional caffeine hit in a mocha. They were creamy and frothy, Michael’s being particularly sweet, without being sugary.

Koko Black also has an extensive array of desserts, cocktails and specialty chocolates, all rich, indulgent, and priced accordingly. It’s very popular, often crowded with people waiting for a table, and consequently doesn’t have the sophisticated atmosphere that the décor and music suggest they’re aiming for. Sophisticated or not, I’ll be back again when I have an excuse.

Categories
Posted by Cindy at 4:51 pm