This weekend my Dad and his wife Anne have flown down from Brisbane, and on Saturday they came over to check out our flat for the first time and have some lunch. Michael and I have hit upon a winning combination in spanakopita and ratatouille. They're easy to prepare, although it takes a while, and they're guaranteed to generate lots of leftovers that are equally enjoyable reheated or at room temperature, teamed up again or served separately with other things.
Michael chopped and stirred for a couple of hours on Friday night, making a half-batch of this ratatouille recipe. I like to keep cooking this until the veges are disintegrating into each other, but I think they're meant to be a bit separate and discernable, really. Makes a pretty good side for meat pies, and would also be well matched with buttered crusty bread or couscous.
I got the spanakopita recipe from the only women's magazine I've ever respected in the morning, Bust. It has a great section in which some hip young femme shares a favourite recipe handed down from her mother, grandmother, or other fine-cooking female ancestor. 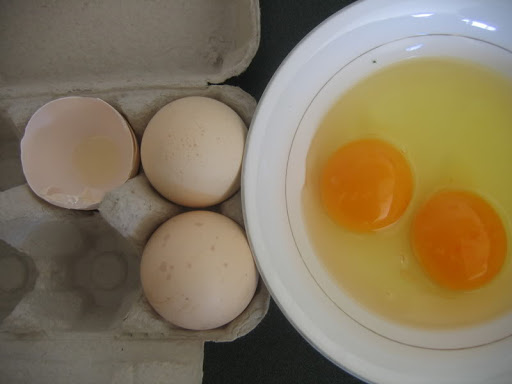 I'm going to go off on another tangent now and remark upon the fine eggs I bought at the Vic Markets. Huge and speckled, looking farm fresh. Super-yellow yolks that you have to stab with a fork to break. Organic and free range. Definitely the way eggs should be!
OK, OK, here's the recipe: 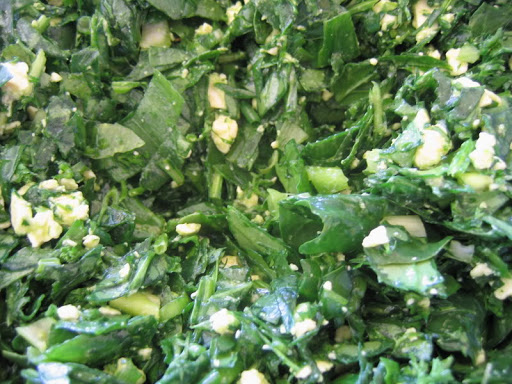 Next you need a 375g box of filo pastry sheets. My box of filo dough proudly proclaims that it's cholestrol free. That's because it looks and tastes like paper, and whatever recipe you use is going to tell you to butter it up good. This recipe doesn't specify how much butter to use, and it's probably a matter of personal taste how much you want. I think I used about another 60g, but I'd recommend just melting a little bit at a time until you're done assembling. The other thing about filo dough is that it dries out easily, so lay it out on a damp tea towel and cover it with another one while you're working.
Now layer a 1/3 of it into the bottom of a large baking dish, brushing melted butter between the layers. Don't slather it too much, just dab it around and feel artistic. Spoon half of the spinach filling on top and make it reasonably level. Repeat with the next 1/3 of the pastry and the remaining spinach filling. Top with the rest of the pastry. Make sure you seal the edges so that the juices don't seep out and don't be too neat and perfectly aligned with your pastry layers: random and crumpled looks cool. Actually, I gave this recipe to Carlo a while ago and he criss-crossed strips of pastry on the top in a grid. It looked way cool. (Apologies to Nadiah if it was you who did the decorating, I just want to give someone credit for that idea.) At this stage, you might think this looks like a tray of your most hated vegetable from childhood, messily wrapped up in greasy butcher's paper. I promise you, the oven has magical transforming powers. Set it to 200 degrees, pop in your tray, and remind yourself to visit it in about 40 minutes.
Here's the interlude where our guests arrived, bringing wine and cheese from the tour of the Yarra Valley they did yesterday. Served with crackers and the cherry chutney I didn't bake into cupcakes. 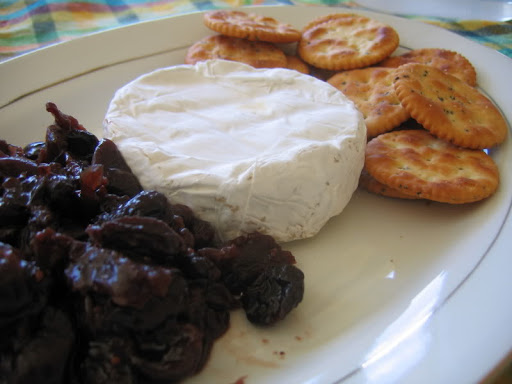 Check up on the oven. Is the pastry looking good yet? The recipe recommends baking for an hour, or until the pastry is brown. I reckon I took it out after 45 minutes. Transformation complete! 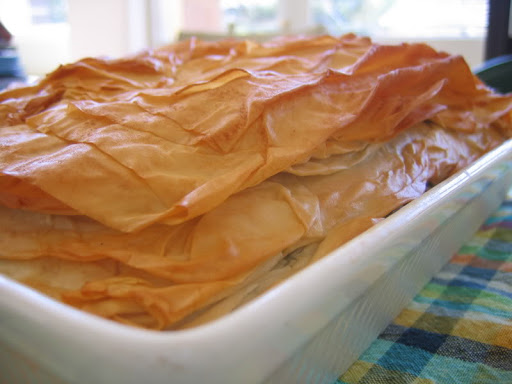 Michael gave the ratatouille a reheat and we were ready to go.

Categories:
Posted by Cindy at 6:26 pm