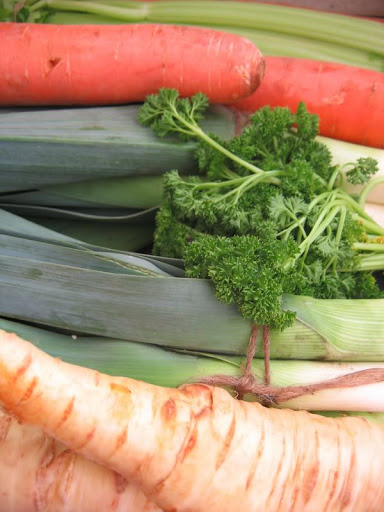 Ex-officemate and now email cooking contact, Carlo, has been getting into French cooking and perfecting a recipe for meat-based glaze. I didn’t feel like I was missing out on much until I saw his cream of mushroom soup, and he helpfully sent me a link to this site so that I could have a go at a vege-based glaze/stock. I figured I’d best do it straight away before spring takes hold, and made a shopping list to take to the Ceres markets. 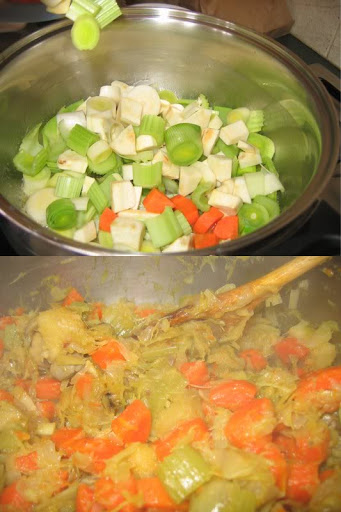 We got started in the early afternoon with lots of chopping. We had more of most of the ingredients that the recipe specified, so we ended up making 1 ½ to 2 times the quantity. This was probably not the greatest idea on our first attempt, during the browning stage in particular. We must have stirred those things around in our biggest pot for at least 45 minutes, with the parsnips browning slightly and the rest just turning to greyish-green mush. The base of the saucepan developed a layer of hardened mush that couldn’t be scraped off easily with a wooden spoon, so we moved onto the next step despite the recipe creator’s emphasis on browning. My guess is that less veges on a higher heat would probably be a better approach.

The amount of liquid we needed to add to double the recipe couldn’t fit into the pot, so we did the simmering part in two stages. All up it took about an hour and a half to reduce the liquid to half its original volume, but it would probably take less if you read the recipe properly and simmer it uncovered for the entire duration (I realised my mistake after the first half hour). We strained the mix first with a fairly coarse sieve and then again with a clean Chux cloth. The second straining yielded some thick paste, roughly the consistency of tomato sauce, and we weren’t sure if we should be keeping it or not. We eventually discarded it, wanting to avoid potential weird textures in the soup. Although the recipe creator suggested a taste test here, it didn’t enlighten us much. The taste of stock on its own doesn’t do much for me, but it was rather peppery, probably due to the half-ground bits that came out of our pepper grinder along with the whole peppercorns. We didn’t salt the stock, planning to get it right later when we made the soup, nor did we reduce it further. It was already less than 2 cups in volume.

By this time it was already after 6pm and time to get started on our cream of mushroom soup. We used a recipe from our new mushroom-themed cookbook, and chose a combination of shimeji mushrooms (reduced to clear at Safeway!) and ordinary white button mushrooms. Otherwise the recipe gets its flavour from shallots, sherry and of course a generous slurp of cream. I wanted to have a thick-ish soup with some mushroom pieces so we kept about a third of the mixture aside while we whizzed the rest in the food processor. 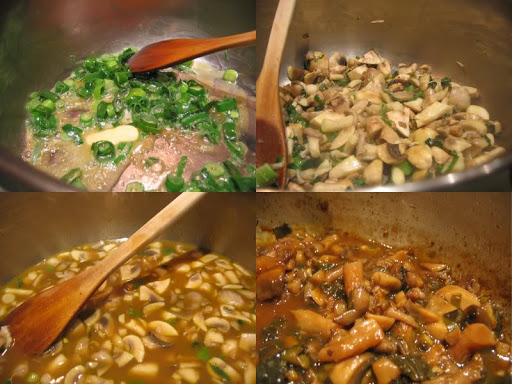 Given our small amount of stock we only made enough soup for a bowl each, served with pumpkin bread from our morning market trip. The taste was outstanding: thick, rich, deep, earthy. In hindsight, that was really rather concentrated stock and we probably could have thinned it out with about half as much water and made more soup. 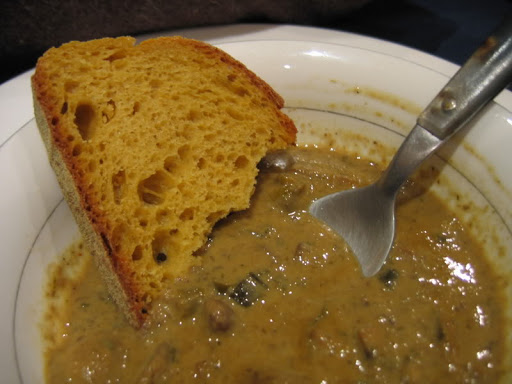 By the end of the stock-making process I was feeling rather harried and sick of cooking, but the result was spectacular. Filling the house with the aroma of stock simmering on the stove should be a comforting winter activity, and our sunny morning at the markets was a wonderful way to welcome spring. I doubt I’ll be bothered making my own stock again, at least until next autumn, and in the meantime I’ll appreciate good quality restaurant soups even more.
Categories
Posted by Cindy at 6:11 pm