The dinner of sausage rolls just keeps giving and giving. We also had a about a cup of pecans left over and I thought I’d do an internet search for something fun to make with them. One of the first sites I discovered was About Southern US Food and I had to try making Butter Pecan Turtle Bars in all their buttery glory.

Given that I have a food processor to mush up the base layer, this recipe was very easy to prepare. Instead of the normal milk choc chips listed I bought my favourite dark ones, which also “hold shape when baked”. Traditional southern-style cooking isn’t built to reckon with this space-age (and probably highly toxic) invention: they’re much better off sprinkled on the slice before it goes in the oven. 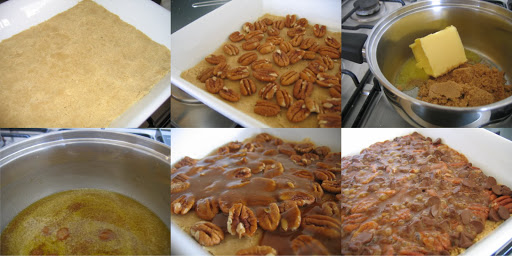 The recipe also advises that the slice should be cooled completely before cutting. I can confirm that if you have a go at it while it’s still warm it will crumble everywhere, but it’s also gooey and yum. Conversely, this slice is impossible to cut when it’s been stored in the fridge, so aim for room temperature.

I baked this to use up the pecans, but soon I’m just going to buy more pecans so that I can make it again. Slice it small for a dainty treat with coffee, slice it medium for dessert with a spoon of cream or ice cream, slice it large and serve with a glass of milk and you’ll feel like you’re being spoilt at Grandma’s house! 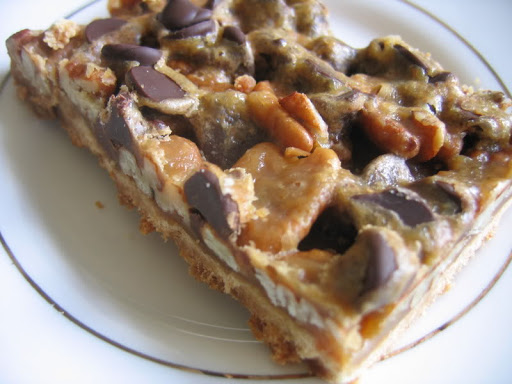 Categories
Posted by Cindy at 1:23 pm