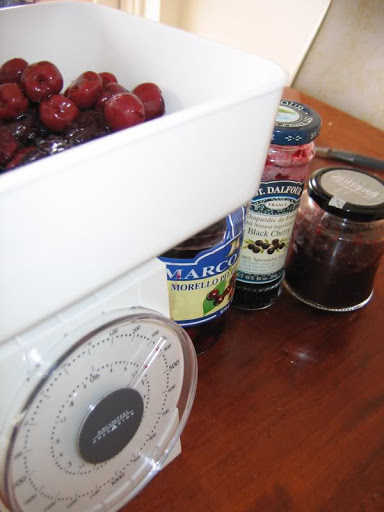 Nigella's recipe for chocolate-cherry cupcakes was just the kind of dessert entry I was after: easily made the day before and prepared in single portions, with a look that combines a fun party treat with dark chocolate elegance. It calls for morello cherry jam in the cake batter, and Nigella likes to buy it at Sainsbury's. With the nearest Sainsbury's almost 17000 killometres away I decided to scout around for an alternative, finding zero perfect but three promising options. The first was a 670g jar of morello cherries in syrup at Safeway, which could also replace the glace cherries that Nige suggests for decoration (I hate glace fruit). Less than $4 and yum to snack on too. The second find was some black cherry jam, also at Safeway. It lacks the sourness of morellos, but has the right texture for the batter. Third is a comparatively expensive jar of sour cherry chutney, bought from a French food stall at the Vic Markets. It certainly had the right cherry taste, but also a vinegary savoury aspect that I was hesitant to shovel into a cake recipe. My solution was to throw in a third of each candidate when the recipe requested jam.

This is a really no-fuss cake mix: none of that creaming butter and sugar stuff. It starts with melting 125g of butter and 100g of dark chocolate in a saucepan. I created my own minor fuss by habitually having "holds shape when baked" dark choc chips on hand which are, funnily enough, specifically designed not to melt. Michael patiently and loyally fetched some melts while I distracted myself with preparing the knish veges. The rest of the batter proceeded as planned: taking the saucepan off the heat, I mixed in 300g of cherry stuff, 150g of sugar, a pinch of salt, 2 beaten eggs, 150g of flour, and 3 teaspoons of baking powder.

Next I dropped big spoonfuls into patty cases, lined up in a muffin pan. Janelle from Ready Steady Cook always says that you have to get the spoonfuls the right size in one go, and not dab in extra bits. 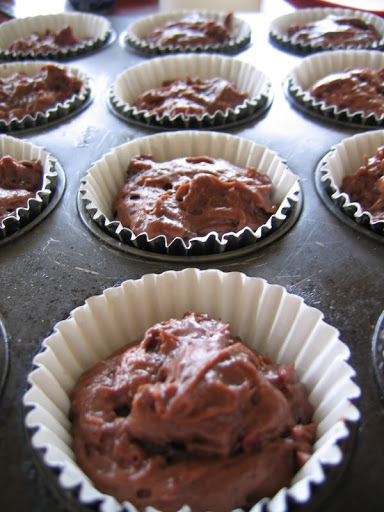 I can't remember why, maybe it was something about air bubbles, or misshapen tops? I failed to do so, anyway. I noticed that the mix was already becoming a bit thick and dry with bubbles appearing, and I'm not certain that I used the right amount of baking powder to substitute for self-raising flour. Nigella reckons this recipe makes 12 and the ones pictured in her book must be larger than I thought, because I made 16 or 17. She also directs us to bake them for 25 minutes at 180 degrees. I toned my fan-forced oven down to 160 degrees and found that a skewer came out clean after 15-20 minutes. Is this an appropriate method for testing the doneness of cupcakes? It was only at this time that I realised I'd never attempted cupcakes before. I turned them out to cool, and Michael and I shared one. It was a little burnt on the bottom and around the edges where it flowed over the patty case, but cooked through and overall rather tasty. Next time I'll try baking on a higher shelf.
Next comes the icing! Even the word icing has me bracing for an intense sugar hit that I might not want. My favourite part of this recipe was that the cupcakes are iced with chocolate ganache. Creamy, rich, and only as much sugar as your chosen chocolate brand lends. Make it by gently melting 100g of chocolate with 100mL of double cream, then whisk it until it becomes thick and smooth. Spread it on the cooled cakes before you taste it, otherwise none of it will get that far. This quantity only covered about 14 or 15 of my cakes, but is probably plenty if you make the prescribed dozen.

Finally, a garnish of cherries. My little cakes looked sweet and tasty but they didn't live up to the smooth, luscious, uniform creations pictured in Nigella's book. I'm too perfectionist. 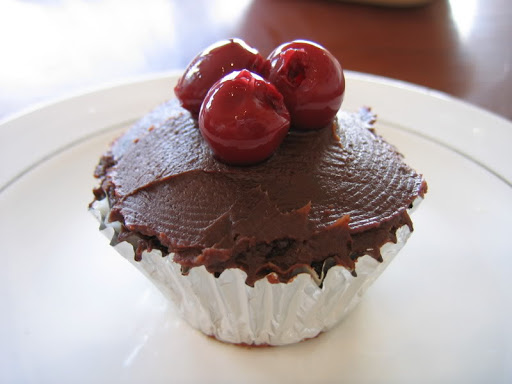 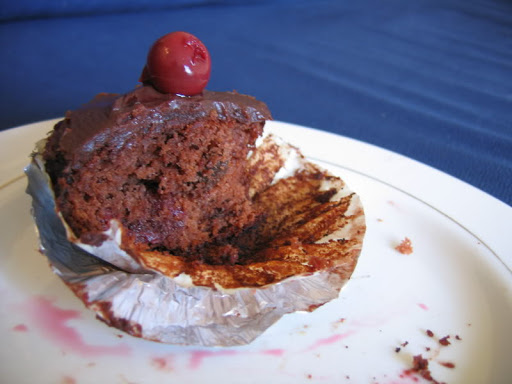 A dozen of these fit neatly into a tray, so I figured that we could sample one or two more. As anticipated, the ganache was divine. I will never eat sugar icing again, this time I mean it. However the cake yielded a fibrous and fragrant little surprise: a whole cardamom pod! The last ingredient in that chutney, 'mixed spice', seemed so innocuous. I hope no-one else discovers unchewable chunks tomorrow. By this time I only half-cared. Hours of cooking left me weary and uninterested in dinner, a clear sign that I should savour the experience of preparing and sharing one dish, instead of trying to prove myself with a double act.

Labels: Chocolate, Dessert, How to be a Domestic Goddess, Nigella Lawson