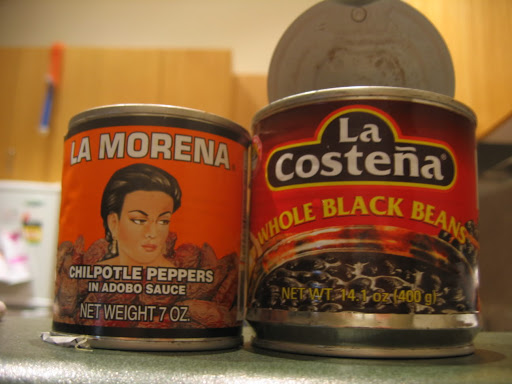 Given all the spare time I’ve had while waiting to start my new job, I’ve been trying to come up with some vaguely interesting things to cook for dinner. Our discovery of a Spanish/Mexican deli nearby prompted me to scour our recipe books for meals containing black beans and chipotles.

While nothing was quite what I was after, I decided to combine a black bean and sweet potato hash from our Moosewood book with a tortilla stack recipe from one of Kurma’s books. The meal itself was pretty straightforward – sweet potato cubes are cooked up with black beans, onion, garlic and cumin and then served on shallow-fried tortillas with salad and sour cream. 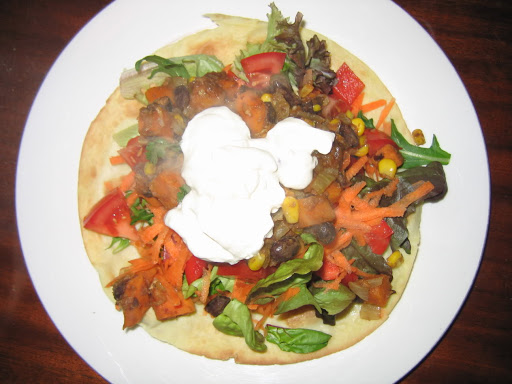 The hash mix was supposed to include jalapenos, but I substituted in some of the sauce that the chipotles (which I’ve just discovered are actually smoked jalapenos – you learn something new every day) came in (called adobo sauce). This gave the whole mix a faint of spicy-smoke flavour – reminiscent of hot salami more than anything else. I foolishly spooned a couple of the chipotles on the top of my meal and was forced slather on the sour cream to counteract the pepper power. The whole meal could probably be made more delicious with the addition of a couple of fatty extras: grated cheese and avocado, but I’d still consider it a success.
Categories
Posted by Michael at 6:27 pm