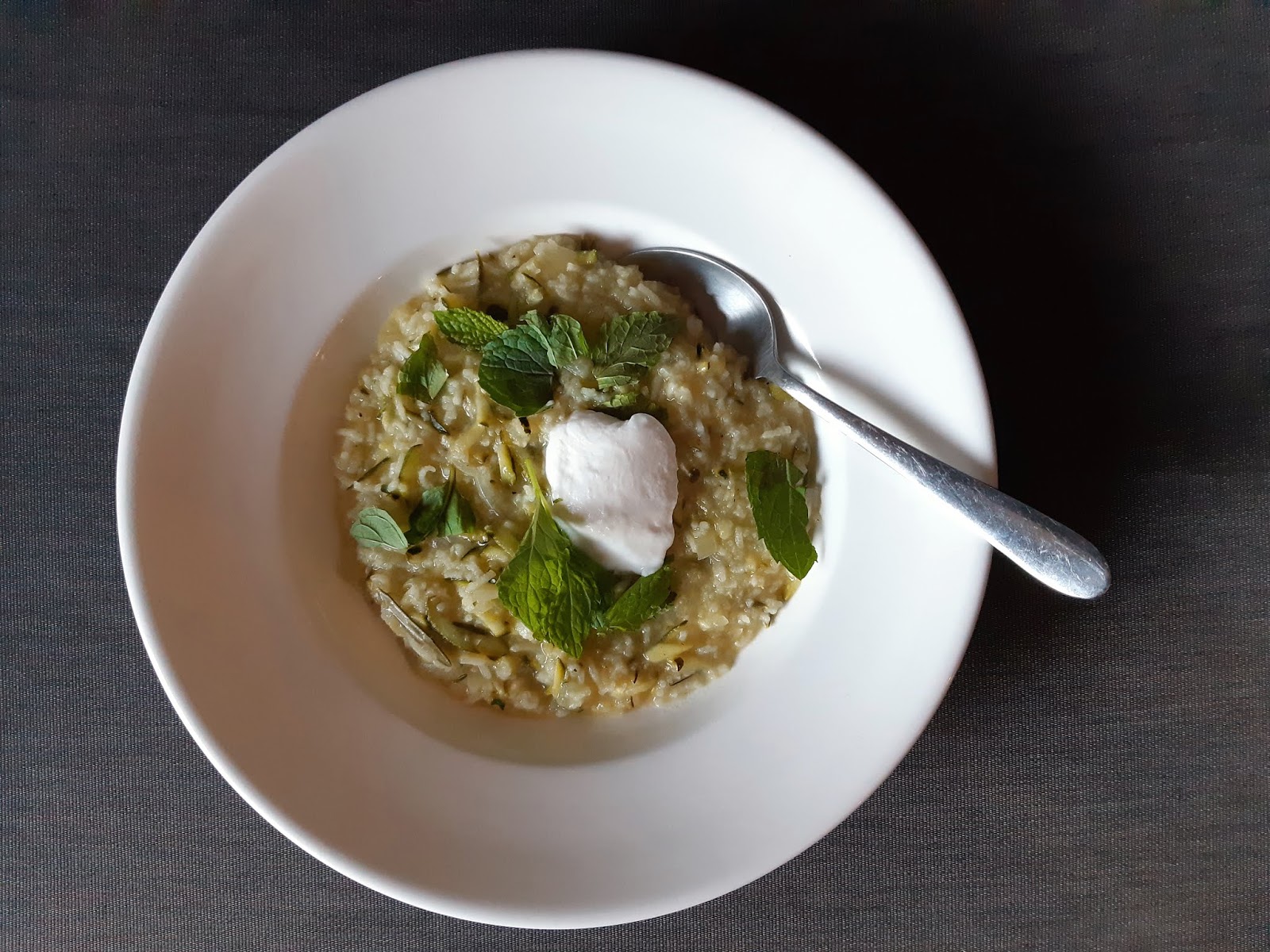 This month I've done something that seemed almost unthinkable four months ago: I resigned from my job of more than a decade! While I was really very happy there, something new and intriguing popped up and I felt ready for a change.


My longtime workplace is full of wonderful folks who sent me off with the most thoughtful and personal gift: a cookbook made just for me. It's colour printed and spiral bound, with a picture of everyone on the front and 36 recipes individually contributed by my colleagues. The recipes are variously typed, and handwritten and sometimes even illustrated, with extra little notes to me and tips on how to make them best. I LOVE THIS BOOK.


It was actually Michael who dug into it first, and fast: he picked out one of the more weeknight-friendly meals to cook on my first day at my new job. It's a hearty vegan soup of zucchini and rice that's livened up with lots of lemon, fresh herbs and a dollop of coconut yoghurt. It's something that Elise and Dani make together, and they hand-wrote and diagrammed it out on some cute graph paper. It was such a comfort to come home to, and also very handy to microwave at my new workplace for lunch - by then it almost had the texture of a risotto.

Looks like I've got a 2019 cooking and blogging project all cut out for me. 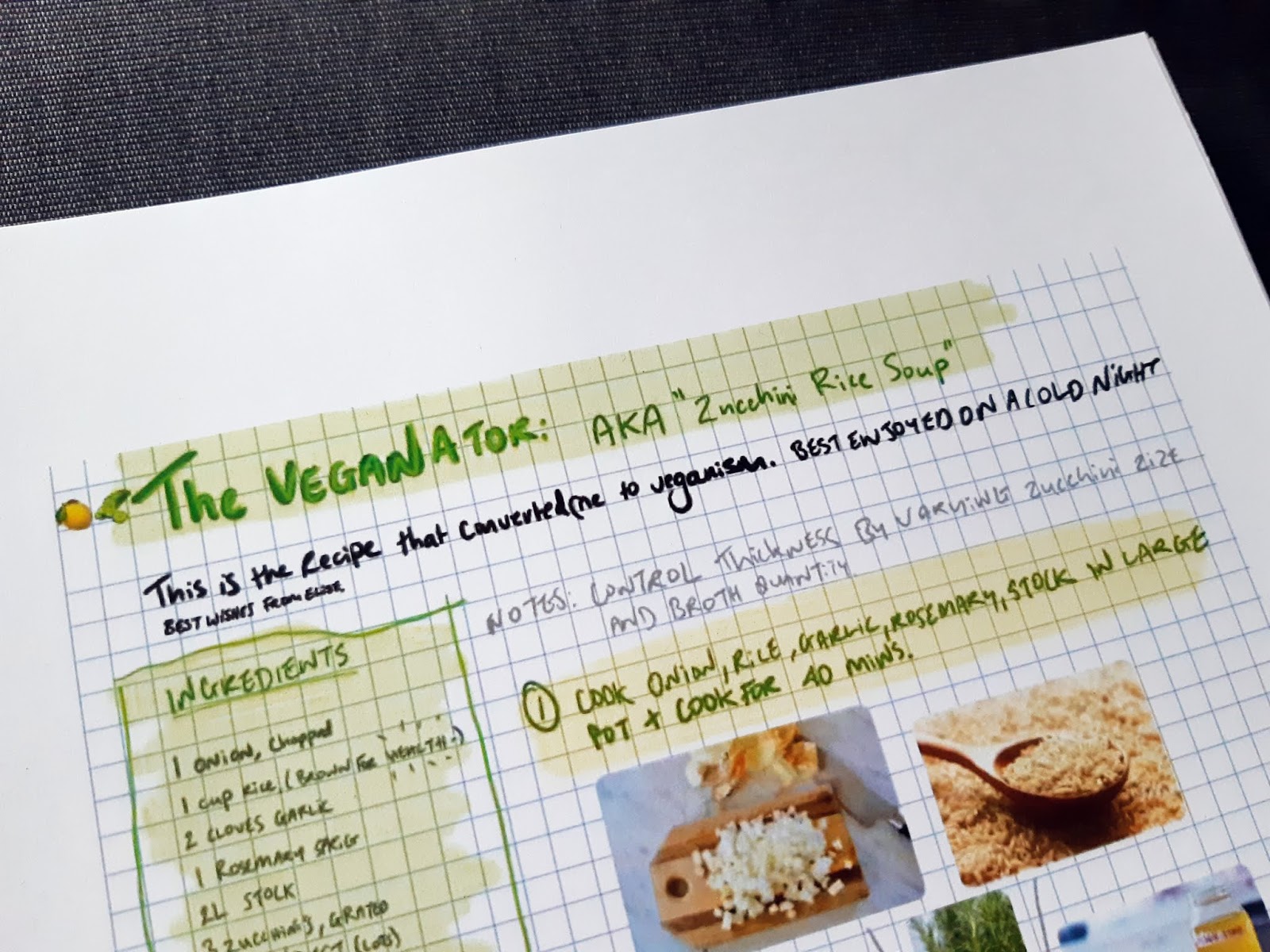 The Veganator, aka Zucchini Rice Soup
(a recipe shared by Elise and Dani)

Set a very large pot over medium heat and throw in the onion, rice, garlic, rosemary leaves and stock, and cook them for 40 minutes. Add the grated zucchinis until they turn soft.


Add the lemon zest and juice, and season with salt pepper and nooch to taste. Serve garnished with a spoon of coconut yoghurt and plenty of mint leaves.
Posted by Cindy at 8:59 pm 3 comments: 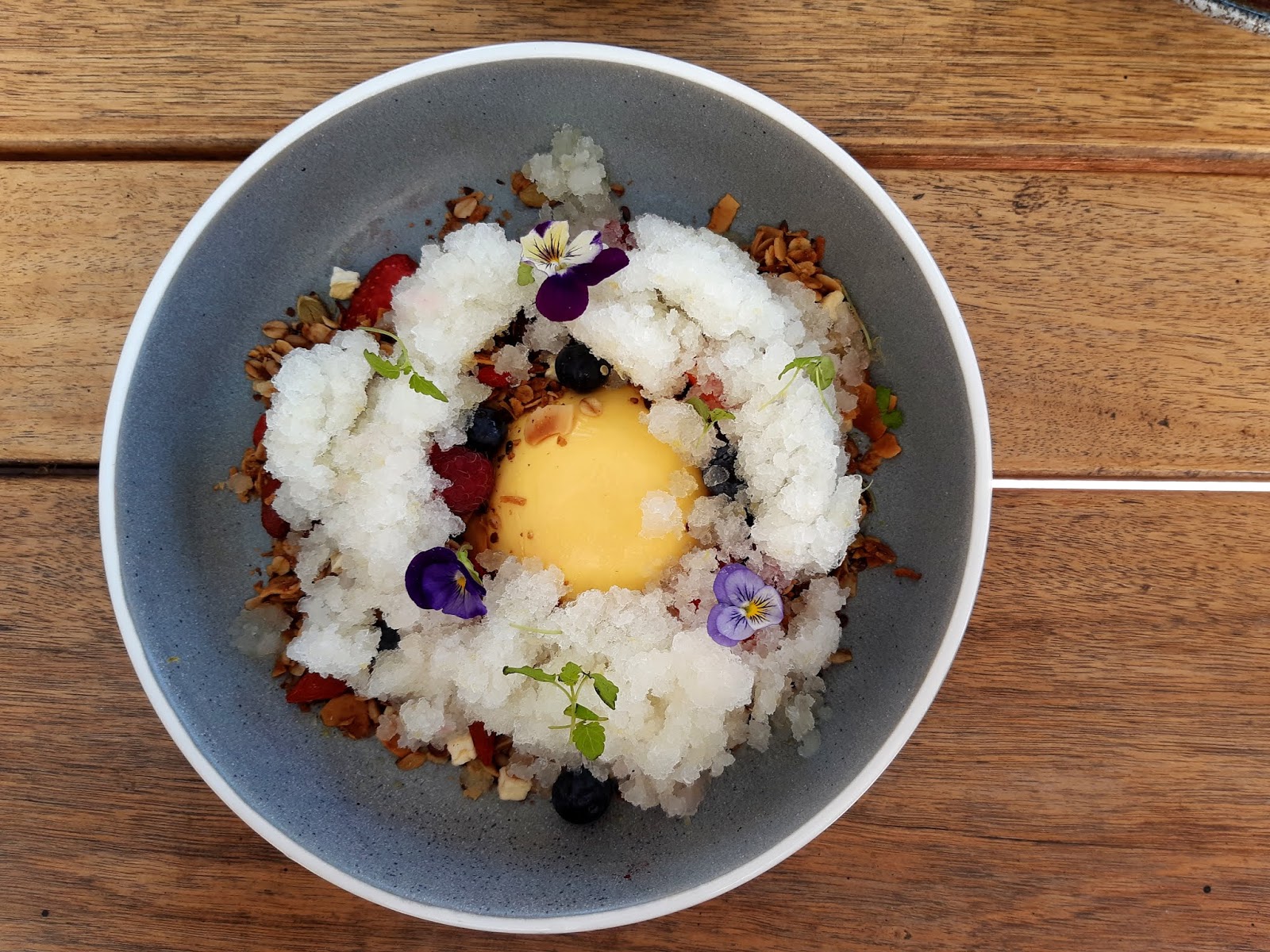 We met up with friends at Lux Foundry on a sunny Saturday morning, nabbing one of the many outdoor tables and enjoying the parade of neighbourhood pups that hang out there. It's a fantastic space on a summer's day - a mix of shady and sunny tables, lots of space and a nice, laid-back vibe.

The menu's a mix of breakfast classics and more interesting creations, with a decent mix of sweet and savoury options. Cindy, of course, went sweet with the mango and passionfruit panacotta ($16.50), with oat crumble, seasonal berries, lemon granita and fruit. It was a beautiful dish, with the big blob of panacotta surrounded by flower-speckled ring of icy granita. The combination of granita with the granola-y crumble was a bit odd, but Cindy was on board with the fruity, summery ingredients. 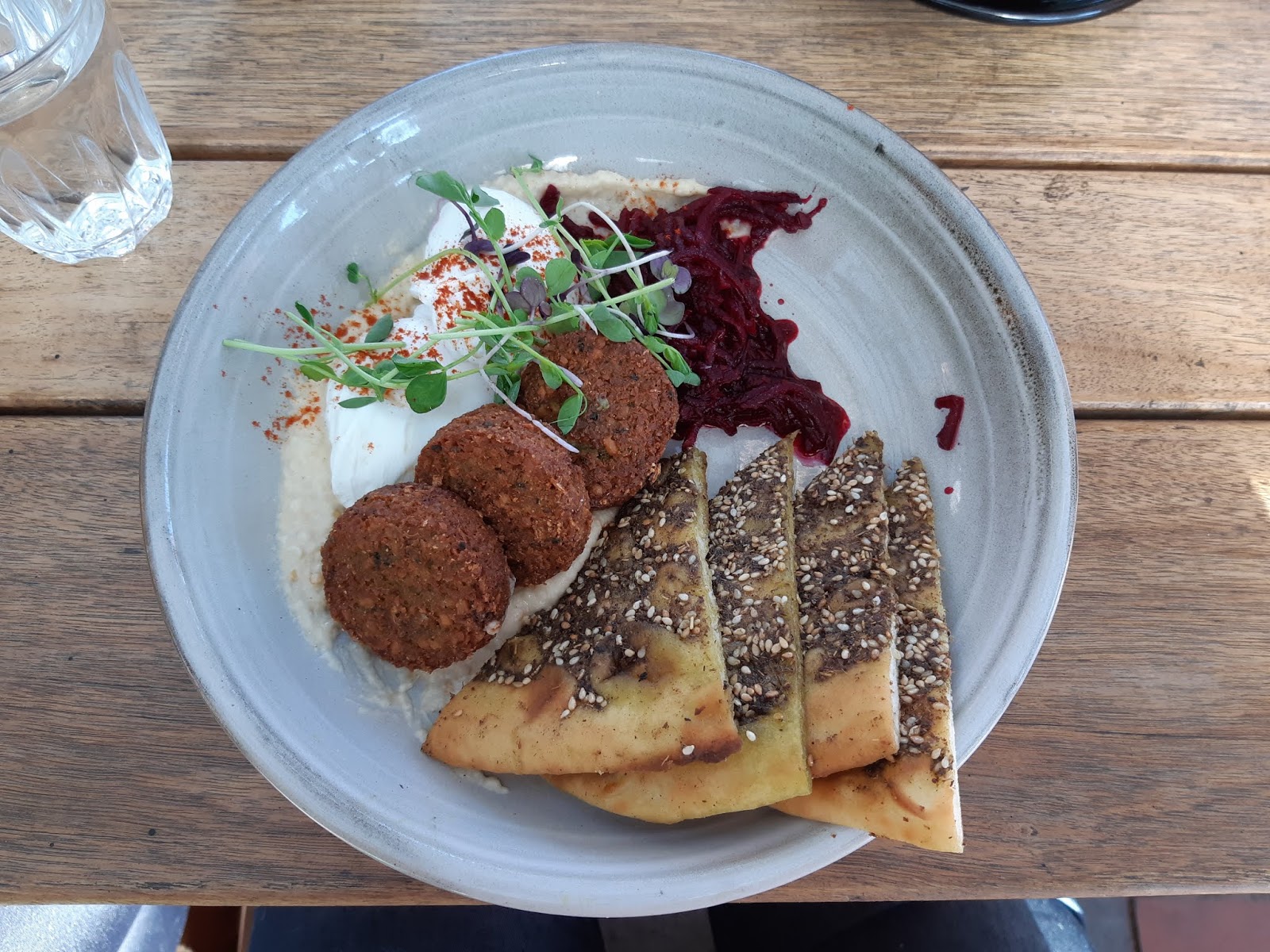 I ordered the Middle Eastern breakfast - poached eggs with grilled zaatar flatbread, beetroot relish, falafel and smoky baba ganoush ($17.50). This ticks all my boxes - perfectly poached eggs *and* falafel, with the smoky eggplant dip adding some richness to everything. I loved it - definitely a dish I'd go back for again in future.

Lux Foundry was superb - helpful and efficient service with an interesting menu executed well. We haven't gone there often in the eight or so years that Lux has been around, but we'll certainly be returning again before too long.
____________


Even ignoring a rash of recent freebies, there's plenty of good reviews of Lux out there - see positive write-ups on Olive Sundays, Far Fetched and Fanciful, Short & Stout, Linnie Eats all the Food, French Toast and Indie Pop, Food of the Soul, Melbourne Vita, Skinny Glutton, In Scout's Honour, The Lamb Shank Redemption, The Grazing Panda, Simply Palates, Seriously and A Hound About Town.
____________

Accessibility: We didn't make it beyond the outdoor area - the tables out there mostly have fixed seating. We ordered at our table and paid at a counter inside.
Posted by Michael at 7:17 am 2 comments: 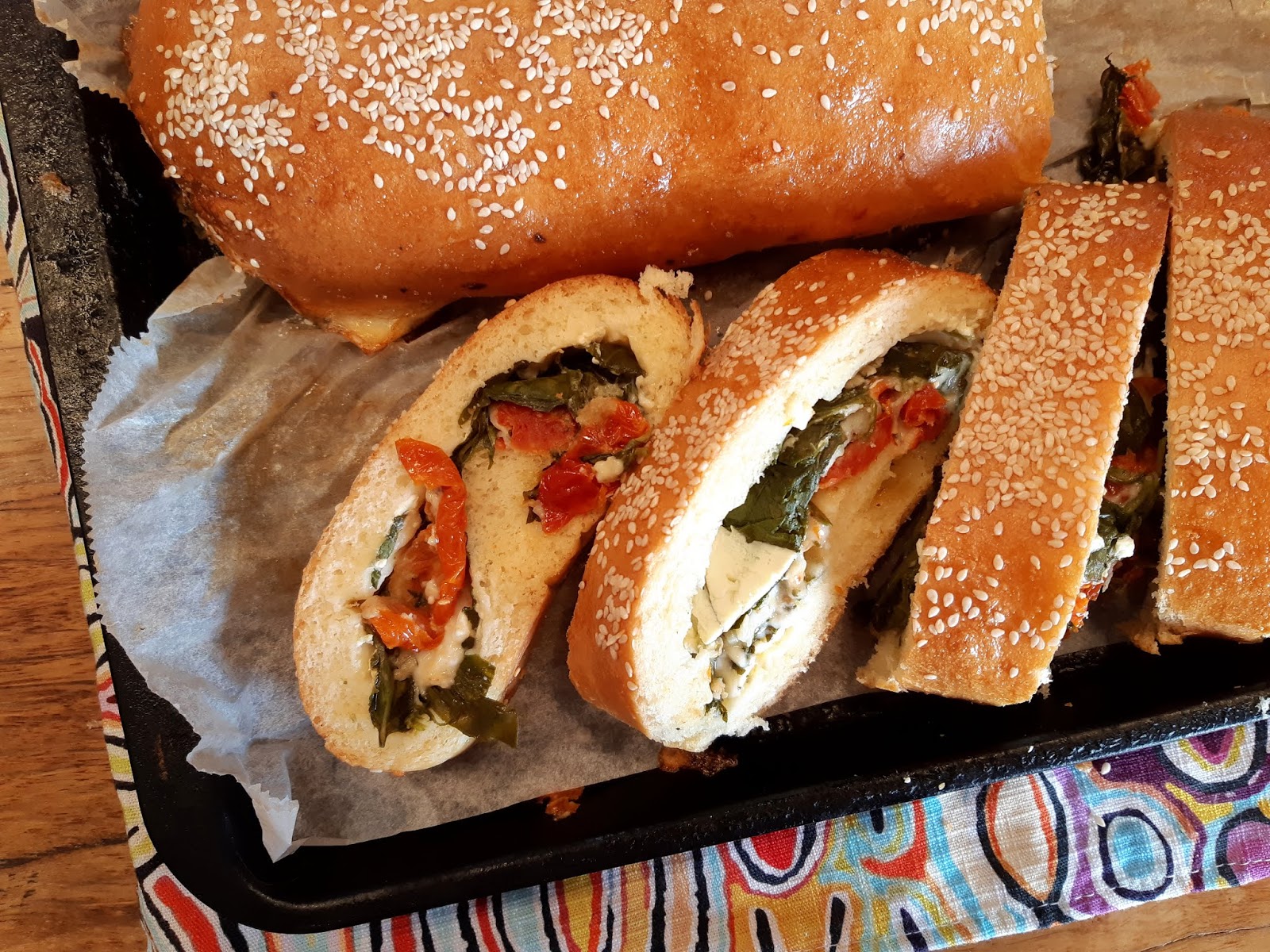 We kicked off Ottolenghi club for 2019 with a big gathering at a friend's house - 10 people, 10 dishes and just an astonishingly good spread (see here for a full summary of the night's food). We decided not to make two dishes this time around, instead joining forces for one of the trickier dishes in Plenty More - the taleggio and spinach roulade.

It all takes a bit of time, but most if is waiting around for the dough to rest at various points in the process. The assembly requires a steadier hand than I can muster, but Cindy managed it very successfully. The result was delightful - a crusty, puffy dough and a rich delicious filling. We served it at room temperature, but I think it'd be even better if you got into it right out of the oven. 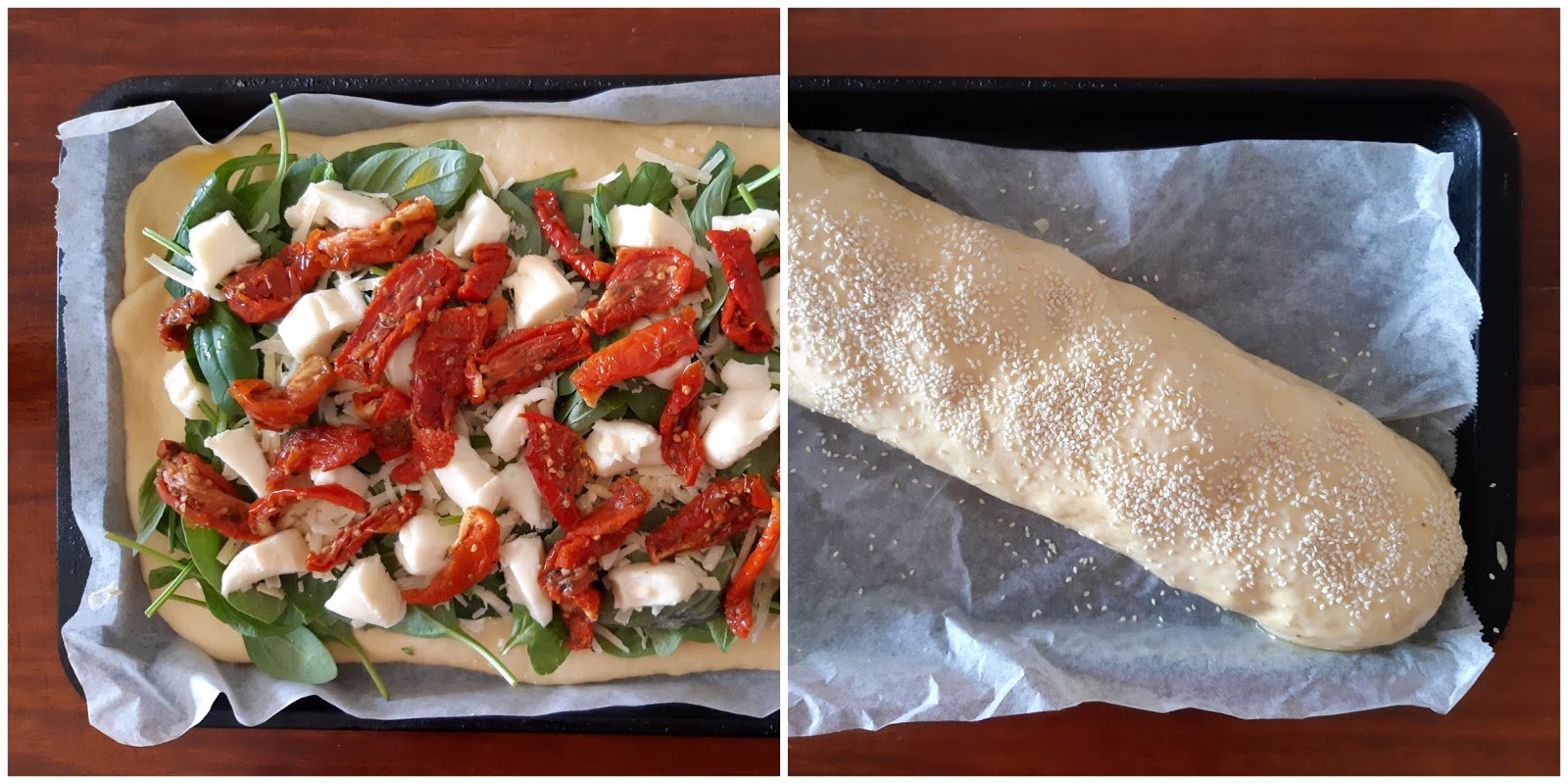 Gently heat the milk in a small saucepan until just lukewarm. Stir in the yeast and keep stirring until it dissolves. Set aside for 10 minutes.

Place the rest of the dough ingredients in a large bowl with a 1/2 teaspoon of salt. Add the milk and yeast and stir it all together until you've got a good dough going. Knead your dough for 10-15 minutes, until you've got a smooth, shiny dough ball. (You can do all of this with a dough hook and an electric mixer if you like, but it was easy by hand.)

Brush another large bowl with oil and pop the dough in it, covered with a damp tea towel. Leave it all to rest for about 45 minutes - it should double in size.

Unroll enough baking paper to cover a 30cm x 40cm baking tray. Drop the dough onto it and roll it out flat to fit the baking tray. Carefully transfer the paper and dough into the tray. Cover the dough with the tea towel again and let it rest for half an hour.

Now it's time for the filling - spread the cream cheese as best you can across the surface, sprinkle with salt and then scatter over the spinach, basil, pecorino, taleggio and semi-dried tomatoes. Now it's wrapping time - pick up one of the longer sides of the dough rectangle and carefully roll it up into a rough spiral. Try to leave it standing on its seam so that it stays rolled up when it bakes. Cover with a tea towel again and let it rest for another half an hour.

Preheat the oven to 220°C. Brush the surface of your big dough log with the egg white and then sprinkle over some sesame seeds. Bake for 10 minutes and then turn the heat down to 180°C and leave to cook for another 25 minutes. It should brown up nicely and a sharp knife should come out with some melted cheese on it, but no dough.

Remove from the oven and let it sit for a few minutes. Cut into thick slices and serve.
Posted by Michael at 8:49 pm 1 comment: 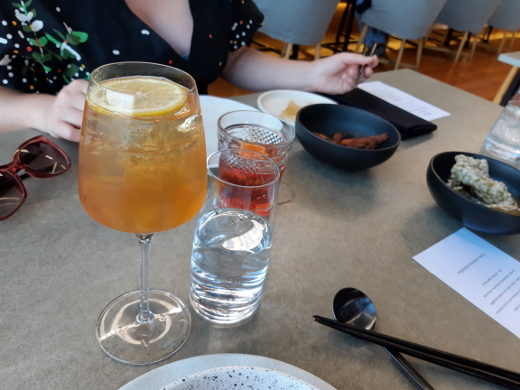 Our Hobart friend Liz kindly booked the three of us a table at Aløft when we stopped by Hobart in January. This restaurant's been operating from the fancy Brooke St pier for a couple of years, and has an entire glass wall offering a view out to the harbour. (We ended up just basking in that view in the moment and enjoying each other's company rather than capturing any great shots of it.)


Michael and I didn't know what to expect: we trusted Liz's eating recommendations, and by extension, this restaurant's. The less elaborate of the banquet menus is $80 per person, and there are explicit vegetarian, vegan and coeliac versions of it available. There's no problems mixing and matching those different versions of it at one table. 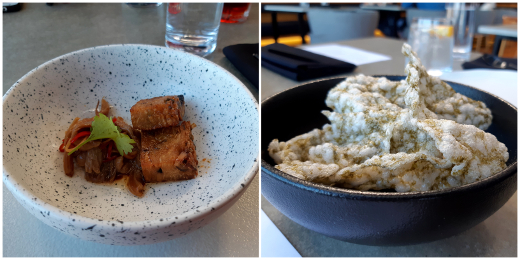 For our first course, Michael and I shared a bowl of tapioca and nori crackers, and then received our own little bowls of crisp-edged turnip cakes. 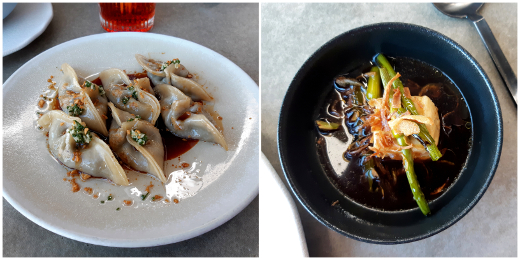 There were enough wood ear mushroom dumplings to share around the entire table. The vegetarian accompaniment was a small bowl of agadashi tofu in a deeply flavoured broth with burnt onion and baby leeks. 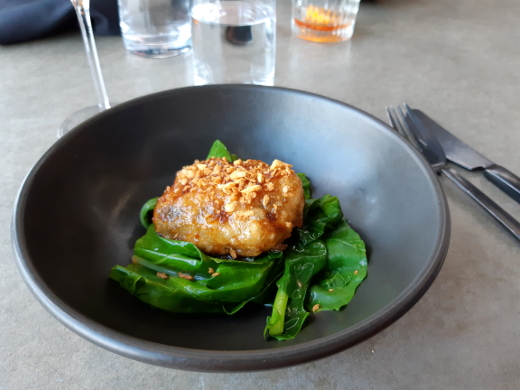 The table favourite was the same course for both omnivores and vegetarians: in our case, the watery texture of zucchini was at its best encased in a thick, crunchy tempura batter. The batter was coated in hot and sour sauce, and it all sat on a bed of garlic greens. 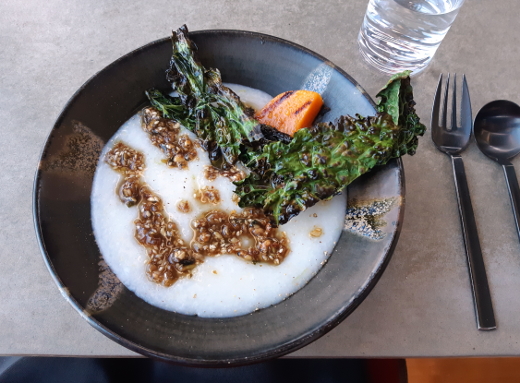 I was skeptical that our main course of congee would be more filler than flavour, but I was very much mistaken! Crisp-baked greens and roast pumpkin kept the texture varied, and there was plenty of rayu to liven up every mouthful of rice. This would make a terrific meal on its own. 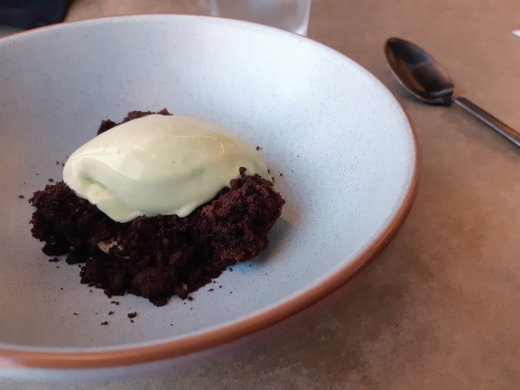 After a series of savoury course drawn from across Asia, dessert had different roots. I was well satisfied by the crumbled chocolate brownie, with little bubbles of dark chocolate and a scoop of fresh mint icecream. 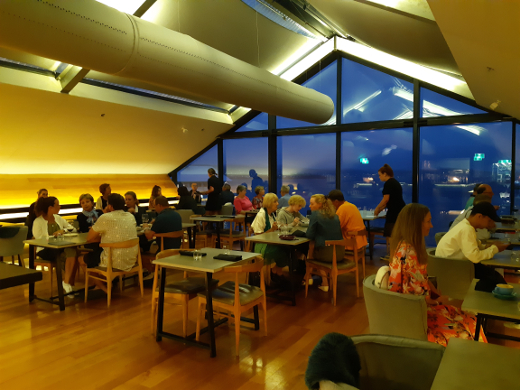 The team at Aløft have really figured out how to create intense, savoury flavours for vegetarians. Service is great, and the setting is remarkable. This a special occasion experience with plenty to offer both locals and visitors.
____________


You can read more positive accounts of Aloft on blogs Fork + Foot, Living Loving Hobart (twice), Just The Sizzle, and Linnie Eats All The Food.
____________


Accessibility: Standard access to Aloft is via a small flight of stairs; contact the restaurant to find out if there alternative access via a lift. Tables and chairs are arranged with a moderate amount of space (see photo above). We didn't visit the toilets.
Posted by Cindy at 9:45 am No comments: