This was originally intended to record both our cooking and our dining out adventures, but the lack of kitchen facilities has so far been fairly limiting. After three straight days eating every meal out, Tuesday was my chance to christen our spacious new kitchen with a home-cooked meal. To counter the tail-end of the Melbourne winter, I opted for a hearty soup. The recipe came from our Moosewood recipe book and was billed as a fusion between Asian and Australian cooking. It was a fairly simple unblended soup of leeks, garlic, spinach, rice, lemon juice, coconut milk and vege stock along with a few spices. To make sure it filled us up, I picked up a sourdough baguette from one of the local bakeries. 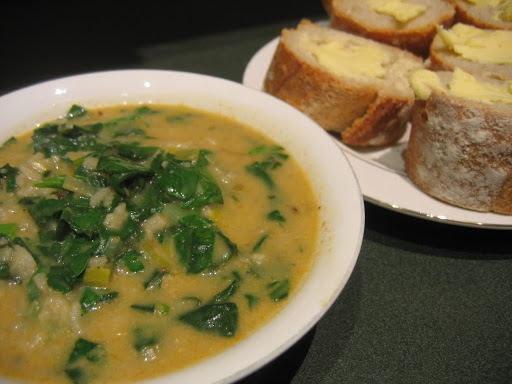 The lemon juice and coconut milk gave everything a bit of a Thai-style flavour, while the leek, garlic and stock were more reminiscent of a traditional European soup. Even with the rice, the whole thing was a little insubstantial and we managed to polish off a fair chunk of the bread as well.
Categories
Posted by Michael at 6:38 pm