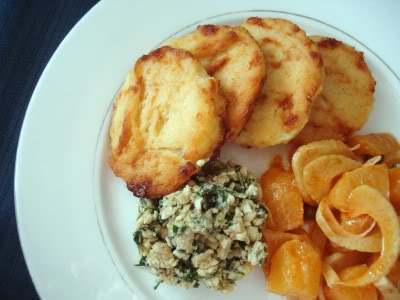 At last I can boast a gnocchi success! I haven't triumphed over (or even re-attempted) the potato-based kind just yet - these large golden rounds are semolina gnocchi, as demonstrated by Maggie on The Cook & the Chef's vegetarian-themed episode. They come with a walnut pesto sauce, and I picked a stonesoup salad recipe to round out the meal.
The semolina gnocchi take a bit of time but actually aren't too fiddly. The first curious step is to infuse a half-litre of milk with rosemary and bay. I must admit I was a little skeptical, but the flavour actually shone through to the finished gnocchi. Like polenta, the fine-ground semolina sets up easily into a slab (even when I subbed powdered no-egg and milk for the requested egg yolk). Maggie had me cutting the slab into rounds, and I wondered whether I was supposed to discard the semonlina scraps. I decided to bake them too, and they were at least as delicious as the 'real' gnocchi discs, with even more crispy golden edges. Next time I think I'll just slice that slab into diamonds or some other waste-eliminating tessellation. Fresh out of the oven, the gnocchi have a wonderfully tender interior, a gloriously golden brown underside, and tantalising hints of parmesan and rosemary.
Maggie's gnocchi sauce is essentially a pesto made with walnuts and parsley. Though I didn't have any marjoram I otherwise tried to keep to the recommended ingredient portions. Even so, my parsley pesto looked nothing like Maggie's and worse, tasted completely unbalanced. The perky lemon I liked but there was far too much cheese, rendering the gnocchi too rich, and no flavour from the walnuts at all. Next time I'll take George Calombaris' advice and taste, taste as I go, yeah?
When choosing a side salad I was after something acidic to cut through the rich gnocchi. Jules' orange, fennel and olive salad had the added advantage of using up the two oranges I took the rind off on Saturday morning. Not being a fan of olives or raw onions, I gave them a miss and added a few capers to the mix. The combination of oranges, fennel and spicy-sour dressing proved to be a great one, though I forgot the parsley and overdosed on the chilli powder and it was all a little caustic. Another lesson in care, restraint and tasting as I go.

Semolina gnocchi
(based on Maggie Beer's version, presented on The Cook & the Chef)

Put the milk, bay leaf and rosemary into a saucepan and bring them to the boil. Take them off the heat and leave them to infuse for 20 minutes.
Strain the milk and bring it back to the boil. Whisk in the semolina and season with salt. Continue stirring until the mixture thickens and almost forms a ball, then take it off the heat.
Whisk the no-egg powder into the last tablespoon of milk and stir it through the semolina. Stir through the parmesan and butter until everything is well combined.
Pour the semolina onto a baking tray and spread it out until it's about 1cm thick. Leave the semolina to cool and set.
Preheat the oven to 180°C. Lightly spray a baking tray with oil. Cut the semolina slab into shapes using a knife or a round glass. Place the gnocchi in the baking tray and bake them for about 20 minutes, until golden brown. Serve the gnocchi with parsley-walnut pesto, below.

Parsley-walnut pesto
(based on Maggie Beer's walnut sauce, presented on The Cook & the Chef)

Crush the walnuts in a mortar and pestle. Add the garlic and pound further, then the herbs. Add the parmesan in batches and mush it up too. Gradually stir in the olive oil, then the lemon zest and juice. Spoon the pesto over semolina gnocchi.

Potent orange-fennel salad
(based on Jules' orange, fennel and olive salad at stonesoup)

Peel the oranges and chop them into chunks. Finely slice the fennel bulb. Stir together the oranges, fennel and capers in a bowl.
Whisk together the lemon juice, olive oil, cumin, paprika and chilli to form a dressing. Toss the dressing through the salad, season to taste, and stir through the parsley.
Posted by Cindy at 9:48 pm