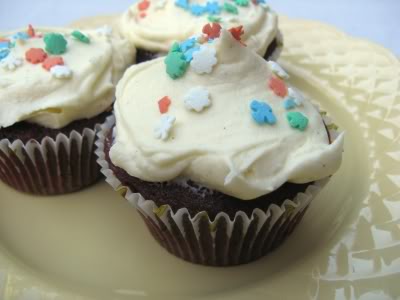 Brownies weren't my only contribution to the tea party. This party's premise was the 30th birthday of a rather smashing lady, and I felt compelled to scroll through my Dessert bookmarks for more inspiration. Red velvet cupcakes caught my eye. This version comes from Simply Recipes and is written by cupcake creative Garrett McCord - I'm a regular and admiring reader of his other food blog, Vanilla Garlic. 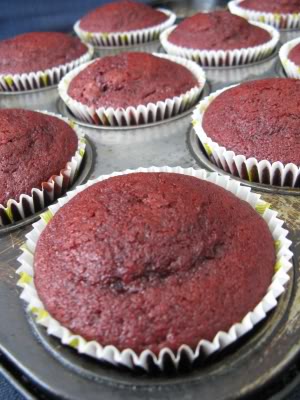 The 'red' in 'red velvet' doesn't come from raspberries, beetroot or any other produce; it's the biggest dose of red food colouring you might ever ingest in a sitting. The cake also includes a little cocoa but doesn't have a strong chocolate flavour at all. These proved to be pleasant and mild; it's their looks that are more memorable. 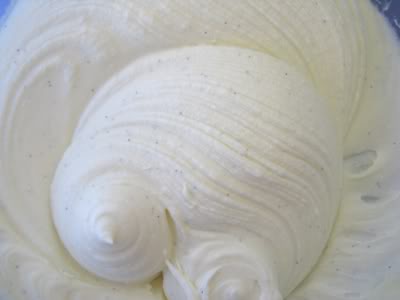 But, oh - the icing! Red velvet cake is iced not with traditional buttercream but with a cream cheese-based version. And it was the lightest, smoothest spoonful of heaven I may ever have tasted. It seems likely that I will never bother with buttercream again (though ganache will probably still get a guernsey at other times and places). Not one for piping, I slathered it onto the cupcakes with a teaspoon and rather liked the effect. 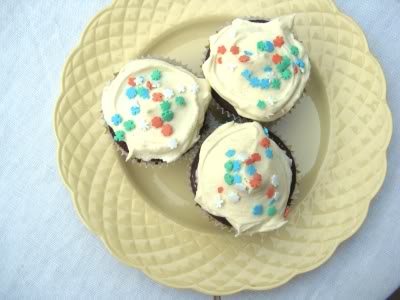 Garrett's recipe is a fabulous rendition of a southern U.S. favourite. The cake has a lovely texture, but I reckon it's the icing that's the absolute keeper - I'm looking forward to teaming it with other flavours.

Preheat the oven to 180°C. Set 10-12 cupcake papers into a cupcake baking tray.
Cream together the butter and sugar until light and fluffy. (I had real trouble with this! Most likely because my butter hadn't softened enough.) Beat in the egg thoroughly.
In a large bowl, sift together the flour, cocoa, bicarb soda, baking powder and salt. In a second smaller bowl, whisk together the buttermilk, vinegar, vanilla and red food colouring.
Gradually and alternately beat the flour and buttermilk mixtures into the sugar/butter/egg mixture, until the cake batter is smooth and homogeneous.
Spoon the batter into the lined cupcake tray, filling each cup about two-thirds full. Bake for 18-22 minutes, checking them with a skewer. Allow the cakes to cool before icing them.
For the icing, cream together the butter and cheese, then beat in the vanilla. Gradually beat in the icing sugar until the sweetness is to your taste (I found that 1 cup of icing sugar was just right). Slather the icing onto the cupcakes.
Posted by Cindy at 12:01 pm