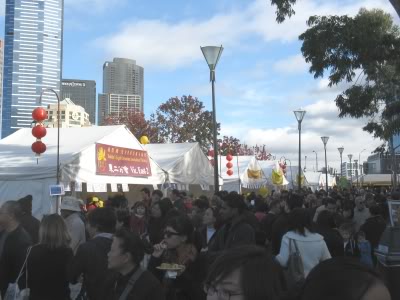 Our visit to this year's Buddha's Day & Multicultural Festival was much anticipated. I first heard of it two years ago, after Mellie and EG attended and blogged the festival food. Last year Michael and I were out of town when the festival rolled around and I enviously read more about the food from Kristy and Buttons. Finally, this year, Michael and I got ourselves to the festival and having skipped breakfast, we couldn't wait to hit the stalls. Though they're operated by only two or three organisations, the volume of deep-fried and faux-meaty goodness is pretty amazing - barbecued corn, turnip cakes, deep-fried sushi and bread, curry puffs and spring rolls, veg oysters and squid, steamed buns, noodles, soup and sticky rice... these are the things we ultimately didn't find room for! 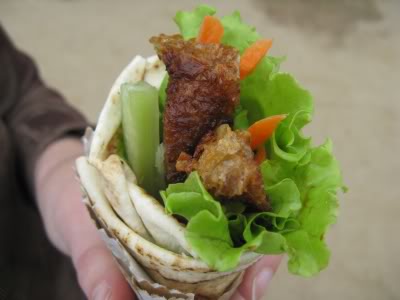 My first taste was of vegetarian Peking duck. This is probably the best flavoured 'duck' I've ever had, though the wrap suffered a little from sitting in the display box for a while. 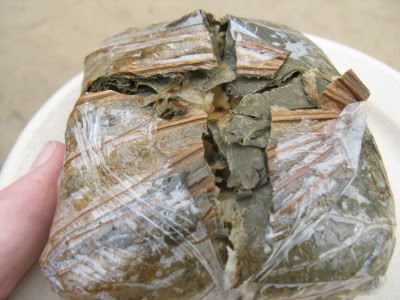 Michael got stuck into the veg chicken in lotus leaf. More filling than my first choice, this was unlike anything we've bought before - soft and subtle rice, 'chicken', mushrooms and what we think were chestnuts. 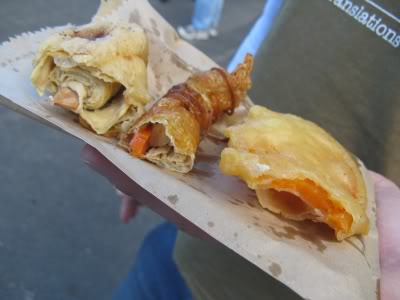 Ramping up the grease factor were the deep-fried chicken drumstick, prawn, and sweet potato. The faux-meats offered some interesting textures, but ultimately there was too much oil and too little crunch in these morsels. 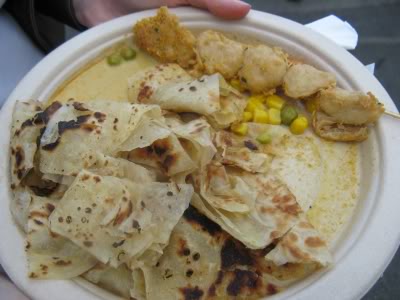 By contrast, this plate got the oil element down perfectly. The roti was delectably crisp and perfectly mopped up with the smattering of curry sauce. The golden chicken skewer ranked as the best faux meat we sampled that day - served super hot with a melt-in-the-mouth centre and light and savoury crispy coating. 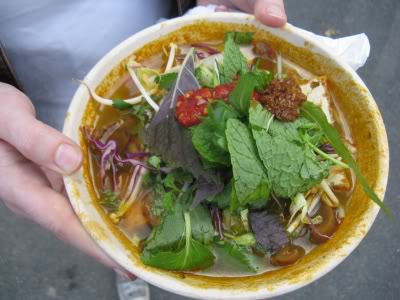 By this time I was done eating, but Michael went back for a bowl of 'beef' noodle soup. It was most impressive, with tender tofu in addition to the faux beef, and some fab spicy condiments to ration out. 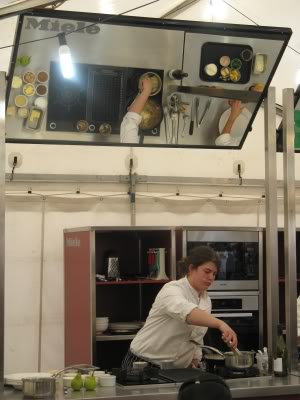 After eating our fill, we headed over to the ongoing Vegilicious cooking demonstrations to see what Fifteen had to show us. Between instructor Glen and Fifteen alumnus Patty, they demonstrated an impressive three course meal in about 40 minutes. The mushroom pasta main and baked pear dessert looked fabulous, but the thing that Michael and I will remember most from this exhibit was Glen's use of anchovies in the bruschetta entree. 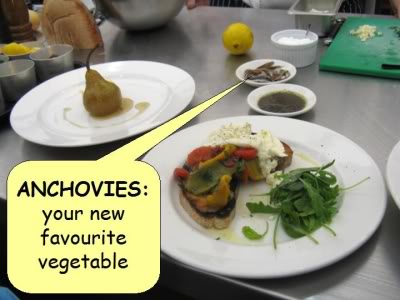 At a vegetarian cooking demonstration - seriously? Not. Cool. Unfortunately, this has only served to put us off visiting the restaurant.
On the brighter side, the Vegilicious booklet has many genuinely vegetarian recipes from the other cooking demonstrations at the festival (although I just spied another one that includes shrimp paste - argh!). We also had the good fortune to run into Will - we made his online acquaintance through this blog a while ago and he was photographing the festival. Hopefully his pictures will be up on the festival web site soon!
Will had already attended a lot of the cooking demos and he observed that many of the successful chefs featured had admitted that these dishes don't appear on their menus. It's possible that they chose dishes more accessible to the home cook but in some cases I suspect it reflects the scarcity of vegetarian meals at their establishments. I'd like to think that these sessions might encourage them to think more about tasty meat-free meals but I also wonder if the opportunity's been lost to show off the awesome vegetarian cooking that has long been going on in Melbourne. I would love to see something from the Las Vegan crew, or learn how to make roti and faux meats by hand, like the ones we enjoyed from the stalls. How about some East Asian Buddhist cooking?
Overall I thoroughly enjoyed our outing to the Buddha's Day and Multicultural Festival; I'll look forward to stopping by for a lunchtime feast next year. In the meantime, I'll be thankful for the many Melbourne cafes and restaurants who know their stuff and can sell me a brilliant vegetarian meal any time I want it.
Posted by Cindy at 9:45 pm