Rather shamefully, it's taken Cindy and I about three months to make our way to Radical Grocery on Sydney Road. Cindy was there for the pre-opening potluck, but since then we've somehow avoided Sydney Road for months at a time. The shop is everything other bloggers say - loaded up with exotic vegan and fair-trade goodies, run by the super-friendly and enthusiastic Anikee and remarkably reasonable prices. We loaded ourselves up with chocolate, mock-meats, coffee and tea, and wandered out with a vow to return sooner next time. 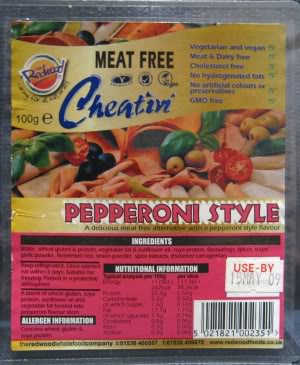 The most interesting of our new purchases (at least to me) was a packet of meat-free Cheatin' pepperoni. I've missed heavily processed salamis and such since going veg - especially on pizzas (which is why I was so excited about Eat Pizza), so there was only one place these little slices were going. 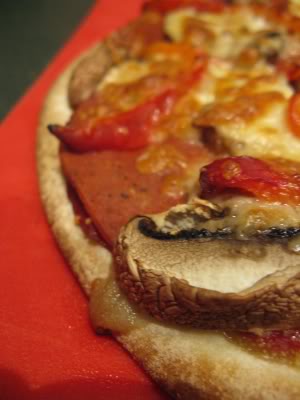 These were pretty basic pizzas - pre-bought bases from Piedemontes, a bit of tomato paste, some mushrooms and roasted capsicum strips, mozzarella and our 'salami'. Fake salami is never quite going to recapture the crispy spiciness of the real thing, but the Redwood brand loads theirs up with some kick, giving the pizza the zing I was hoping for. It's probably not an essential fake-meat product, but Cheatin' pepperoni will at least partly fill the spicy void on your pizzas. We'll definitely be going back for seconds.
Posted by Michael at 6:18 pm