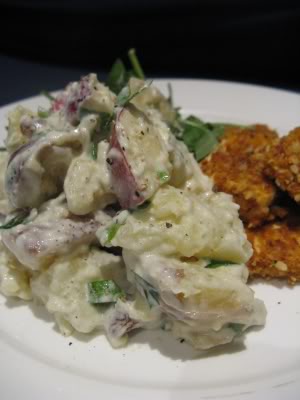 Though I haven't done so as often as I would like, I label some of my bookmarked recipes with the season they're best suited to. In this case, Matt (of Matt Bites) did the work for me by naming this dish Autumn apple and potato salad. The inclusion of apple certainly sets it apart from the common bacon-and-mayo potato salad seen at barbecues across Australia; Matt also suggests dressing it with blue cheese or ranch-style condiment. I think these dressings are more common in the U.S. than here, and easily bought by the bottle. Instead I thought I'd try making my own blue cheese dressing and I picked this recipe from Taste.com.au since it'd make use of my leftover buttermilk.
We teamed the salad with baked tofu 'fish' bites and a generous handful of spinach and rocket leaves. I'm still only a cautious and occasional appreciater of the more pungent varieties of cheese, and this dressing pleased me in more bites than it repelled me (how's that for a recommendation?). Lovers of blue cheese will certainly enjoy it; for me it was at its best up against the sweetness of an apple chunk or sultana. 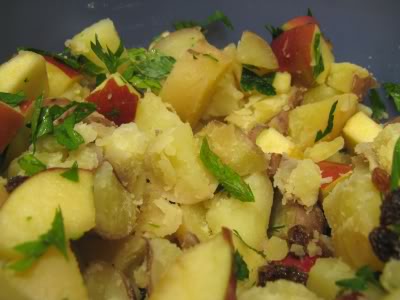 Autumn apple-potato salad
(a synthesis of recipes at Matt Bites and Taste.com.au)

Boil the potatoes, skin on, until tender but still firm.

Meanwhile core and dice the apples (leave the skin on), place them in a salad bowl, and sprinkle them with the vinegar to prevent browning. Toss through the sultanas and parsley.

In a separate smaller bowl, crumble the blue cheese and then whisk through the remaining dressing ingredients until it is as smooth as possible (you could also do this in a food processor).