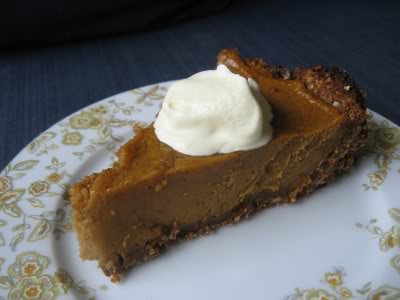 Michael's Dad has been in town this week. We see him very rarely and we insisted that we'd cook him a meal. Michael took charge with eggplant lasagne rolls and roasted beetroot salad for dinner, while I happily prepared dessert. Keen for another installment in my series of autumn-appropriate recipes, I thought wistfully of the sweet potato pie that I saw on vanesscipes about a year ago, before the blog's demise. Thankfully, as with her cocoa cookies, I was able to track down Vanessa's recipe on another site with a google search.

Pumpkin and sweet potato pies strike me as being distinctively American - I've not encountered anything like their starchy, smooth and mild filling elsewhere. This one is livened up with ginger, both mixed into the filling and via the use of gingernut biscuit crumbs in the buttery crust. After a tentative taste of the filling, I added extra spices and sugar and include these new quantities below. This recipe is most definitely not vegan in its current form, and I'm a little surprised since so many vanesscipes were. As I chewed meditatively on my second slice (for breakfast on Sunday!), I wondered whether ground cashews or silken tofu might replace the cream and eggs in the filling... perhaps with an extra binding agent (egg replacer? arrowroot? agar agar?).

This sweet potato pie really is unlike anything else I've baked before - closest perhaps to a baked cheesecake, though without the acidic twang. I'm not certain that it will be loved by everyone, but I reckon it will please most. It certainly pleased us. 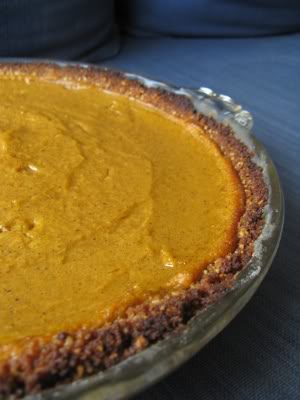 Spicy sweet potato pie
(based on a recipe from defunct blog vanesscipes, still viewable at the cooking channel)

Preheat the oven to 180°C.
Line a baking tray with foil and place the whole, unpeeled sweet potatoes on it. Prick them with a fork and bake them until tender, about an hour. Allow them to cool.
Spray a pie dish lightly with oil, and then roll a small amount of flour (a tablespoon or two) around the inside of the dish until it is completely but lightly coated.
Grind the almonds in a food processor, then add the ginger nut biscuits and blend until they're coarse crumbs. Add the sugar and salt, pulsing briefly, then the melted butter, blending until just combined. Press the mixture into the pie dish to form the crust, and chill it in the fridge until the filling is ready.
Once the sweet potatoes are cool enough to handle, peel away the skin and roughly chop the flesh. Put them in a blender with the remaining filling ingredients and blend the lot until very smooth.
Pour the filling into the crust and bake for 45 minutes, or until the filling has set and is just starting to crack. Cool the pie for an hour before serving, with an extra dollop of cream.
Posted by Cindy at 8:57 am