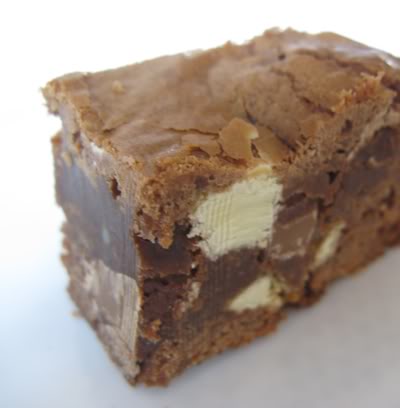 Over April and May, Robyn pulled a little trick in the calendar she made for me. Choosing a recipe too long to fit on one page, she revealed the tantalising list of ingredients for white chocolate brownies in April, leaving me hanging until May to actually see the preparation method! This actually worked out well - I baked the brownies late in April for a tea party held on the first weekend in May.
As you can see from the photo, this brownie isn't without cocoa solids. In fact, there's almost half a kilo of three different kinds of chocolate in the smallish tray I baked. The batter, which contains some of this chocolate, serves as little more than a binder for the chocolate chunks. As a consequence this is one of the firmest and least fudgy brownies I've sampled. That didn't affect its popularity, though - the 24 modest pieces that I cut this into had completely disappeared before I left the party.
A quirk of the original recipe was the inclusion of 125g plain flour and 40g self-raising flour. I don't keep self-raising flour in my pantry since it can be substituted with a combination of plain flour and baking powder. By my scrawled estimations, this recipe is requesting 164g plain flour and just a gram of baking powder (give or take, uh, a gram). I humoured my batter with that pinch of baking powder, but given that our favourite brownie recipe doesn't include any leavening, I suspect these can safely be baked without it.

Preheat over to 170°C. Grease and line a 20cm square cake tin with paper.
In a medium-sized saucepan over low heat, melt the butter, first 150g milk chocolate and the dark chocolate. Remove the saucepan from the heat and allow it to cool for about 10 minutes.
Whisk the sugar and eggs into the melted chocolate butter. Thoroughly stir through the flour, then fold through the chopped chocolate. Pour the brownie batter into the cake tin, smoothing over the top. Bake for about 30 minutes, testing with a skewer.
Posted by Cindy at 11:30 am