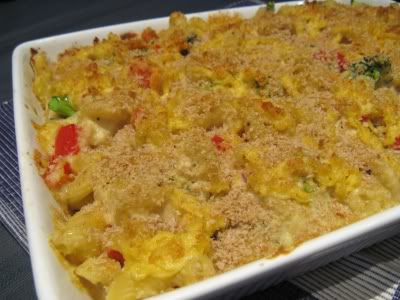 A few days ago Lisa asked a few veg*n bloggers about our perspectives on the rewards and social outcomes of blogging. I happily rattled on for several paragraphs about what this here blog means to me but I realise now that what I really should have shown her was this tray of warm, golden, comforting 'tuna' bake. It takes a whole blogosphere of creative veg*ns to create a winter meal as wonderful as this one.
To start with, there's vegan melbourne. Actually, that's not even the real start because Harriet tips her virtual hat to Melbourne Vegan Potluckers Brendan, Sarah and Emily for their renditions before posting her own take on the vegan tuna bake. The thing about this tuna bake is that it requires mock tuna, and that's hard to come by. Enter Kristy - she and I would probably never have met if it weren't for our respective food blogs. Kristy invited me on a weekend expedition to Footscray, and Vincent Vegetarian Food Mart in particular, where I picked up some very orange but very tasty mock tuna: 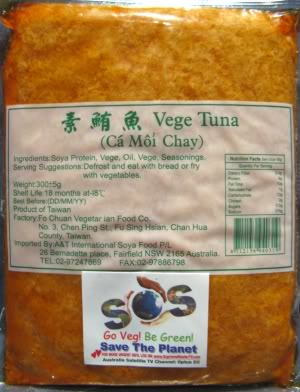 The third set of contributors are even more unlikely - a Helsinki-based vegan couple that I've never even met. Their lasagne recipe ranks among the best that Michael and I have ever eaten, and its white sauce was my choice for this bake. A final nod is due to Lolo of VeganYumYum; her terrific lasagne rolls recently convinced me that a vegan-friendly crunchy breadcrumb topping can be at least as good as melted cheese.

I don't think I can impress on you too forcefully just how great the resulting cheesy tuna bake is. The 'tuna' is perfectly squidgy and salty. This dish will happily accommodate your sad leftover vegetables (broccoli and tomato, in our case), cooking them until tender and surrounding them in a sauce so smooth, creamy and savoury that the absence of cheese is difficult to believe. Some grated Cheezly adds to the effect, but isn't necessary in my opinion. What's more important is a generous sprinkling of breadcrumbs, baked until golden and crisp.

I don't think comfort food, or community food, gets much better than this.

The cheesy tuna pasta bake that isn't
(a spectacular and unwitting collaboration from vegan melbourne, kblog, Tofu for Two and VeganYumYum)

Bring a large pot of salted water to the boil, add the pasta, and cook until done to your liking.
Meanwhile blend up the breadcrumbs, chop the veges and get going on the cashew cream sauce. Put the cashews in a food processor, blending them to powder, then add 1/4 cup of the oat milk and blend to a smooth paste.
In a smallish saucepan, melt the Nuttelex and then whisk in the flour. Whisk and fry for a few minutes, then gradually whisk in the remaining oat milk. Get as smooth a sauce as you can. Bring the sauce to the boil and simmer it until thickened. Stir through the cashew paste and yeast flakes, then season the sauce and stir in the lemon juice.
Preheat the oven to 180°C.
Once the pasta is cooked and drained, tip it into a large casserole dish. Scatter the broccoli, tomato and capsicum over the top. Tear the tuna into small chunks and scatter them over the top, too. Gently combine the pasta, veges and tuna together until they're all evenly distributed, then fold through the creamy cashew sauce. Sprinkle over the grated Cheezly and the breadcrumbs. Bake until the top is crisp and golden, about 20 minutes.
Posted by Cindy at 8:56 pm