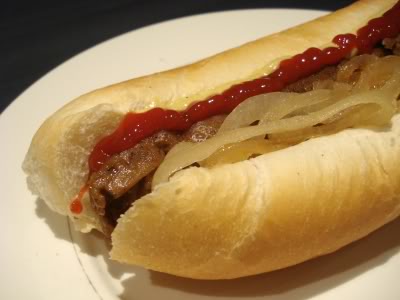 In addition to buying Michael a fancy dinner out for his birthday, I offered to cook him his choice of dinner and dessert at home. Michael ummed and ahhhed for days and eventually I began tossing out ideas to him. The first one to really stick was hot dogs, smothered in sauce and fried onions. I must admit to having a small ulterior motive - I'd noticed Alex publish a recipe for home-made vegan sausages on v-plates just a few days earlier and I was keen to try them out.
The sausage mix is an interesting one - lots of dried spices and some gluten flour, but also chickpea flour and refried beans. I bought the particular Woolworths brand beans that Alex recommended and was pleasantly surprised - they had a perky spicy smell, much nicer than the other brands of canned refried beans I've used in the past. The sausages get steamed for 40 minutes or so before being fried, and this was just the right amount of time to get my onions slow-cooked and caramelised. Another pleasant surprise revealed itself - once steamed, the sausages held together quite sturdily!
The verdict? Well, I must admit that Michael and I treat our sausages as vessels for condiments more than anything, and they fulfill that role with aplomb. Michael diplomatically remarked that their texture was a bit 'pastey' and I'd tend to agree. I think there are a few ways around this - for starters, I was a little timid during the cooking phase lest the sausages get too tough. They could probably do with more time in the steamer and/or frypan. My other idea is to bring a little toothsomeness to them using a grain of some sort - probably rolled oats, maybe ground up, or even some crushed Weetbix.

We followed these delightful dogs up with Martha Stewart's apple pie.

Combine all the ingredients in a bowl, adding the water last to form an almost sloppy dough.
Take hunks of the mixture (about a 1/4 cup each?) and gently roll them into sausages. Place each sausage on a small square of the foil, rolling it to cover and folding over or twisting the ends.
Steam the sausages for 40-45 minutes, rotating them periodically for even cooking.
Fry the sausages up in a little oil until they have a golden crispy exterior.
Posted by Cindy at 12:55 pm