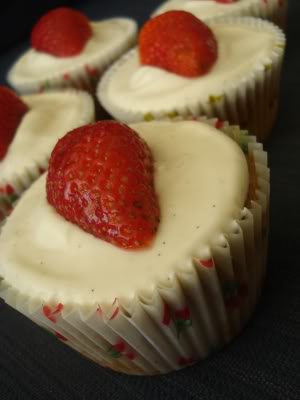 Though these are technically my own invention, I'm dubbing them conglomerate cupcakes after the mish-mash of flavours and recipes I drew on to create them. The cake is a vegan adaptation of the salad dressing cupcake, itself a happy clash of citrus zest, slivered almonds, balsamic vinegar and olive oil. On top I slathered a dairy-free rendition of the cream cheese icing that excited me so much a month ago.
It's not my usual way, but I concocted these cupcakes using wacky (but direct) vegan substitutes for ordinary and very non-vegan ingredients:

Nothing turned out quite as I expected it to. My original non-vegan batch of salad dressing cupcakes were very eggy and I was nervous for my powdered egg replacement. It did its job just fine - actually, the cupcakes suffered more from cheap vinegar and oil. They tasted too strongly of those fruity olives but this was less of a problem once they were fitted out with icing. The icing was ultra-sweet and without tang (next time I'll add lemon juice) but had a surprising marshmallowy character.

Though these conglomerate cupcakes weren't what I expected, a pleasant surprise or two along the way was half the fun. They're just the thing to encourage a little more tinkering in the kitchen!
Posted by Cindy at 9:47 pm