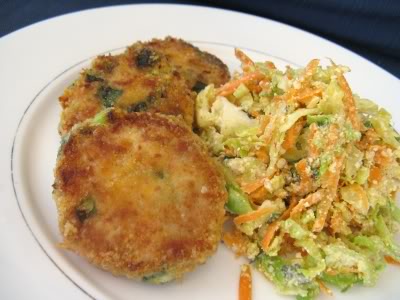 I expected to use the entire packet of vege 'tuna' in the cheesy tuna bake that wasn't. However, as the baking dish filled up with ingredients, I was very happy to reserve the second half of the packet for another recipe: Kristy's 'tuna' patties. She made these, to great acclaim, for a potluck that I was unable to attend and I was keen to taste them for myself. I made a couple of substitutions - using chopped spring onions, mint and a little grated carrot for the vegetable component, and seasoning my white sauce with only the chicken-style stock powder. Though the white sauce was a little gluey in texture, I loved its flavour! I will have to find other ways to make use of it.
I found the patty mixture too moist to roll, exactly, but somehow I managed to get those globs into the breadcrumbs (rice crumbs, actually!) and then a hot, oily frypan. Though a little fragile, these patties were a great success in this kitchen too, earning high praise from Michael.
The patties' salady side is another blog-sourced recipe that features an unusal ingredient: coconut oil. I previously baked a couple of biscuit recipes that suggested its use, though I resorted to alternative fats. I'll be interested to make them again with the recommended coconut oil. It lends a fantastic taste and texture to the dressing of this 'slaw (which I found at 28 Cooks) - it's combined with almonds, lime, ginger and chilli to create a super-vibrant sweet-sour-spicy flavour and luxuriously smooth, sillky texture. I've been musing that the coconut oil, almond and lime component could make a similarly zesty dressing for a fruit salad dessert.

I found coleslaw (and cabbage generally) utterly underwhelming as a youngster. Now with a few great 'slaw recipes under my belt, I'm a lot more enthusiastic. The only thing that could improve this one is the use of some spunky red cabbage, as suggested in the original recipe.

'Tuna' patties
(based on a recipe at kblog)

Melt the Nuttelex in a small saucepan, then whisk in the flour and stock powder until they form a paste. Continue to cook the paste for a few more minutes, then gradually whisk in the oat milk, continuing to whisk until there are no lumps and you have a thick sauce. Remove the sauce from the heat.
Combine the tuna, carrot, spring onions, mint and Cheezly in a bowl, then mix through the white sauce. Place the rice crumbs in a shallow dish and splash some oil in a frypan over medium heat. Gently form the tuna mixture into patties, crumb them with the rice and place them in the frypan. Cook the patties for a minute or so on each side, until golden brown. Rest them on absorbant paper until you're finished cooking the rest of the patties.

Grind the almonds to meal in a food processor. Add the coconut oil, syrup, lime zest and juice, ginger, garlic, chilli and salt, then process the lot until you have a smooth dressing.
Fold together the remaining ingredients in a large bowl, then stir through the dressing. Allow the 'slaw to rest in the fridge and let the flavours develop, for anywhere between an hour and a day.
Posted by Cindy at 9:48 pm