There's much to dislike about winter in Melbourne - darkness at 5pm, day after day of greyness and chilly nights. Upsides: doonas and soup. With darkness encroaching increasingly early as May drifts past, it was time to get back into a winter soup rotation. Our first new soup for the winter: curried eggplant soup, courtesy of Yeah, That "Vegan" Shit. 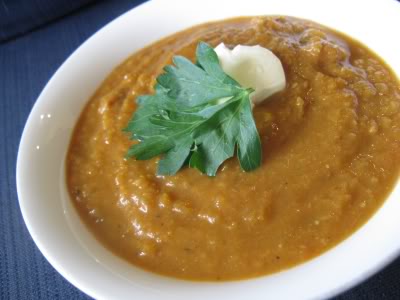 This was a great start to our winter of soup - the curry and other spices contrasting perfectly with the sweetness of the apple and agave nectar, while the roasted eggplant added a nice smoky tone to the whole thing. It's not the quickest soup to make, but the effort is well worth it.
Curried eggplant soup
(found at Yeah, That "Vegan" Shit, where it's credited to SusanV of FatFree Vegan Kitchen)

Peel the eggplant and slice it up into discs about 1cm thick. Put the slices on an oiled baking tray and bake at 200 degrees C for about 30 minutes. When the eggplant is done, take it out and put it aside to cool.
In the meantime, heat up a frying pan with a bit of oil and fry the onions for a couple of minutes, until tender. Add in the apple and fry for another few minutes, before stirring in the tomato, curry powder, cayenne, soy sauce, and agave nectar and cooking for another two minutes. Add in 1 cup of the stock and cook for another minute.
Put about half of the eggplant in a food processor and whizz it all up. Chop the rest of the eggplant coarsely and stick it in a large saucepan with the rest of the stock. Bring this pot to a low simmer.
Put the mix of fried onions etc into the food processor with the eggplant and whizz it all together. If you've got the space, add the beans to the mix and pulse them through to thicken up the puree.
Scrape the mush in the food processor into the simmering eggplant saucepan and stir everything together thoroughly. Simmer for about twenty minutes, stirring often.
Season with salt and pepper and any other spices that you fancy (our curry powder was pretty old and bland, so I added a tablespoon of garam masala to bring a bit of extra flavour).
Posted by Michael at 8:46 am