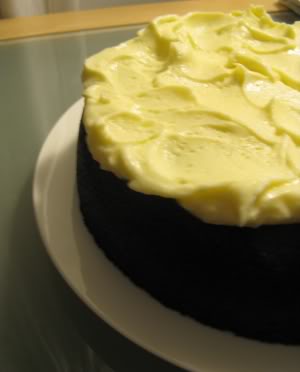 I've been wanting to try this cake for almost as long as we've had this here food blog, but I've been waiting for the right occasion. It's Nigella Lawson's Chocolate Guinness cake, which appears in her book Feast and also on her website. I remember seeing it on Vicious Ange's blog some time ago, though it's also recently been made by Melbourne cooks Julesgourmond, Coby and the Pseudo Epicurean. The dense blackness of the cake has always intrigued me and this week my enthusiasm for cream cheese icing was at an all-time high.
An occasion for such a cake could not come any more perfect than our Friday night lab get-together. The lovely Lady Jane invited us all (several dozen people) into her equally lovely home. Though the garden is her pride and joy, the kitchen and living area - glowing golden from the fireplace - is an even better environment to linger over food and conversation (and bread baking) on a cool autumn night. There were to be three enormous pots of soup, any number of delicate garnishes and baskets of crusty bread, followed by cheeses and fruit paste, red wine-poached pears and cake. If anyone could concoct that cake, the final course of a comfort-food feast, I knew it was Nigella Lawson.
The only flicker of doubt was whether I was up to the task of replicating that recipe. This one has a great start, with the butter being melted into the Guinness rather than softened and beaten. Once the cocoa and sugar were in it tasted fabulous. The cocoa was lumpy, though, so I sieved the mixture before stirring through the eggs and cream and (more strategically) sifting in the dry ingredients. This is when I got nervous. This is when I added four and a half teaspoons of bicarbonate of soda to the batter. Licking the bowl as the cake baked, I was getting a lot more of that cement-mixer bicarb flavour than I was chocolate. And no wonder because looking at the recipe now I should have used only half as much!
At the time, I just whipped up the cream cheese icing, confirmed that it was awesome, and hoped that it'd mask any potential weirdness in the cake. It seemed to. No else appeared to have a problem with the cake at all, though it was certainly less dense and chocolatey than what other bloggers have described. (I think we can safely put that down to some of the cocoa being sifted out and my heinous abuse of rising agents.) The crumb was most pleasant and the chocolate flavour had an interesting siltiness to it. The hosts seemed thrilled that I wanted to leave the leftovers with them (mind you, they are incredibly kind and polite people).
This is without doubt a wonderful cake to bake for a cosy night in with friends. It's so good that you can utterly desecrate the recipe and still somehow earn generous praise. Praise be to Nigella!

Chocolate Guinness Cake
(by Nigella Lawson, available on her website)

Preheat the oven to 180°C and grease and line a springform cake tin.
Gently heat the Guinness and butter in a large saucepan until the butter has melted. Take the mixture off the heat and sift in the cocoa and sugar, whisking to combine. In a small bowl, beat together the sour cream, eggs and vanilla, then stir them into the beer'n'butter saucepan. Sift and whisk in the flour and bicarbonate of soda.
Pour the batter into the cake tin and bake for 45-60 minutes (use the skewer test). Leave the cake to cool in the tin.
Prepare the icing only when the cake is completely cool. Then beat the cream cheese until smooth, sift and beat in the icing sugar, then finally beat in the cream. Continue beating until the mixture is light and fluffy.
Transfer the cake to a serving plate and slather on the icing.
Posted by Cindy at 6:31 pm