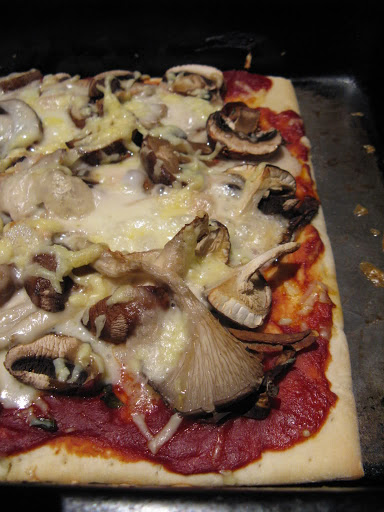 The full title of this post should probably be Pizza III: Careless Cooking. We'd actually chosen this meal even before we had breakfast, writing out a shopping list and stopping in at Piedemonte's on our way home from Babka. Yet things went awry when I pulled out ingredients mid-afternoon to make the dough. First, Kitchen Wench's blog (and the dough recipe therein) had mysteriously disappeared (sadly the damage done seems to be permanent). Second, the bread flour I knew I had in the bottom of the cupboard was wholemeal, not white as I had assumed. The third issue was ultimately my undoing - my dried yeast had expired, I tried using it anyway, and a couple of hour's proving only yielded an oily and not particularly airy blob. Michael graciously made an extra trip to the local IGA and bought the rectangular bases you see here, while I prepared the toppings and my stomach growled. 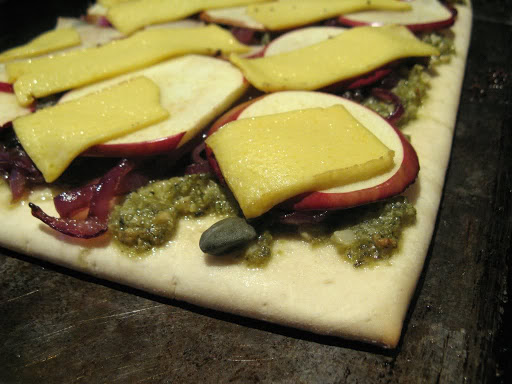 For his pizza (pictured up top), Michael took inspiration from this recipe. Though it's a white pizza he elected to start with slather of tomato paste, then worked his way up through a variety of chunky-cut mushrooms with some fresh parsley, marjoram and garlic. Finally he topped it with pieces of pungent, gooey taleggio cheese. I have a fractured relationship with such cheeses at best, and this one packed a real punch - it was even a little too strong for Michael! Given the odour that lingered throughout the house in the proceeding 36 hours, there'll be no more taleggio at home for a loooong time.
My pizza's a faithful replication of this apple, onion and vegan cheddar pizza I saw at Yeah, That "Vegan" Shit. Working from the bottom up, it features pesto, caramelised balsamic red onions, capers, sliced apple and mozzarella-style Cheezly. The combination of store-bought pesto and caramelised onions came out a little oily, but it's a damn fine flavour mix! The cheezly was a subtle but undeniably creamy addition. I've since tried it grilled on toast - in that situation it melted admirably.
Posted by Cindy at 10:31 am