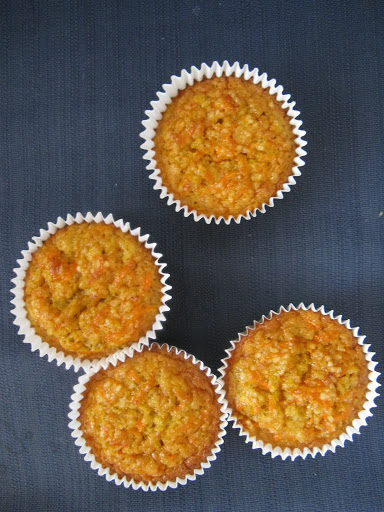 Though I've been baking plenty lately, it's been a while since I prepared myself a mid-afternoon workday snack. (I've been subsisting on store-bought muesli bars, which are tasty enough but far less nutritious than you might think.) I picked these carrot and peanut muffins from my to-cook list mainly because we've had an unloved packet of peanuts in the cupboard for some time. Once those peanuts are ground up, this recipe's a cinch - there's no need for an electric mixer, and I conveniently ignored the bit where Clotilde piped the batter into a mini-muffin tray. Instead I plonked hearty spoonfuls into a standard-sized muffin pan.
Let me tell you what's good about these muffins - they're moist and nutty, just a little sweet, and they have lovely golden caramelised edges. The texture reminds me of cakes that have been made primarily with almond meal. Yet these muffins didn't suit me, somehow - I didn't spend the afternoon looking forward to eating one. When another last-minute guest speaker presented themselves at work later in the week, I shared the remaining nine muffins around and hoped that one of my colleagues might appreciate these more than I did - they certainly deserve to be loved.
Carrot & peanut muffins
(taken from Chocolate and Zucchini)

Preheat the oven to 180 degrees C and either grease or line a muffin tray with papers.
Put the grated carrot and eggs into a large bowl and beat them with a fork until they froth up a bit. Beat in the sugar, then the peanuts. Sift in the flour, baking powder, salt and spices and mix until just combined.
Spoon the batter into the muffin tray and bake for 15-18 minutes (use the skewer test to check when they're ready).
Posted by Cindy at 8:38 pm