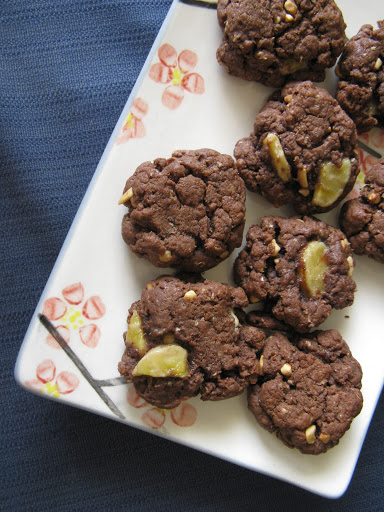 I was down to my last salad dressing cupcake and a solitary Saturday stretched out in front of me - time for some baking! I believe this recipe was created by Vanessa of vanesscipes, a Brooklyn-based vegetarian blog that's sadly now defunct. I bookmarked these cookies over a year ago and was disappointed to discover a dead link. It took me a couple of days to think of googling the recipe name and check if anyone else had made these. Of course they had - "they" being Valerie of in such a world.
The original name for them is Vegan Banana Peanut Butter Cocoa Cookies - it gives you a pretty good idea of what goes into them, though you might also be interested in the inclusion of coconut oil (I just used Copha). The ingredients list struck me as kind of tropical, and something a monkey would surely love! Combined with their squat, nubbly shape, I feel compelled to rechristen them chunky monkey cookies. 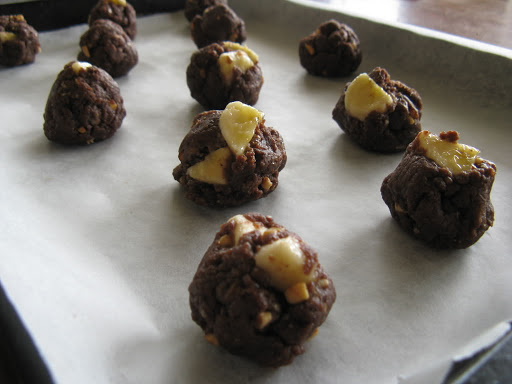 As well as relying on Copha for the coconut fat, I made a couple of other alterations - replacing half of the plain flour with wholemeal, and using raw sugar instead of brown (I was all out). The Copha didn't really contribute anything and I wouldn't bother with it again - Nuttelex should do just fine. The wholemeal flour worked out great, so much so that I'll try a full 2 cups of it next time. My mashing bananas weren't as ripe as they should have been, so I popped them in the oven for 10-15 minutes while it was preheating.
These cookies walk a very agreeable line between sweet indulgence and wholesome snack. They're sturdy with banana and wholemeal flour, but the cocoa and sweetness ensures that they taste like a genuine treat. The cookie dough is quite thick and dry and it made reasonably smooth balls, yet it seems inevitable that the baked cookies will be homely and misshapen. I was unsure about when they were 'done' but somehow got it right - there's crisp resistance on the surface and depths of dense softness within. 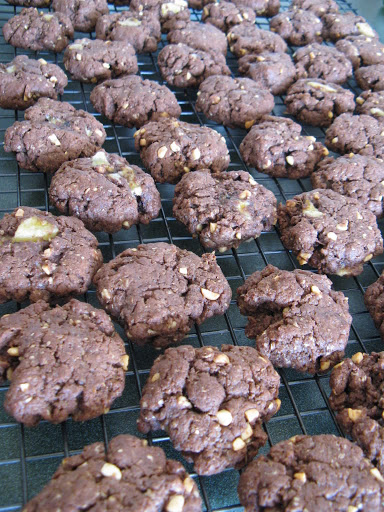 Preheat the oven to 180 degrees C. Lightly bake the first two bananas if they're too firm to mash easily.
In a smallish bowl, sift together the flours, cocoa, bicarb soda and salt. Mash those first two bananas in a separate dish.
In a larger bowl, beat together the bananas, peanut butter, copha, sugar and vanilla until very well combined. Gradually spoon in the cocoa/flour mixture while still beating - it'll be very thick and could take a while to mix properly.
Fold through the diced banana. I found this difficult since the banana is so much more delicate than the dough. I tended to chop the dough up into bits and scatter the banana pieces through it, so that one or two would get picked up as I rolled the dough into balls.
Roll generous teaspoons of the mixture into balls about an inch in diameter, and place them on a paper-lined baking tray (grease-free!). I found that mine didn't flatten in the oven, so I gave 'em a little squash.
Bake the cookies until the the outside lightens in colour and they develop cracks - mine took 10-15 minutes, I think.
Posted by Cindy at 9:05 pm