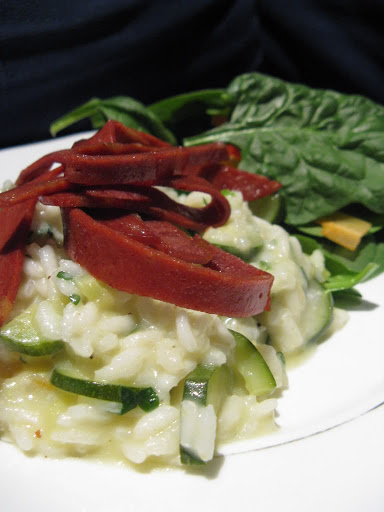 Safeway in Carlton has stopped selling a whole bunch of fake-meat products, so when Cindy stops by Allergy Block for something, she inevitably walks out with armfuls of ridiculous soy products. This week it was fake bacon, and she already had a meal in mind - a baked zucchini risotto with bacon on top thanks to Patricia at Technicolor Kitchen. The idea of a baked risotto suits my lazy cooking style perfectly - all the non-stop stirring required for a standard risotto means I can't wander aimlessly around the loungeroom while dinner's on (or that I can, but dinner ends up ruined). This is much easier: mix everything in a baking dish, bake, stir and serve.

Now I'm no risotto purist, but this came out as well as any stove-top stir-a-thon risotto that we've tried to make before - the grain's stocky and tender, the zucchini flavour spread deliciously throughout and the salty fake bacon strips adding a bit of texture on top. The whole dish was maybe a little on the salty side, but that's probably down to our lazy powdered stock as much as anything else. For an easy and delicious pile of comfort food, this is a weeknight winner.

Preheat the oven to around 200 degrees.

Mix together the rice, stock, butter and zucchini in a baking dish, cover and bake for around half an hour. The risotto mix comes out of the oven quite liquidy, but thickens up pretty quickly once the cheese is stirred in and it starts to cool a tiny bit.

Add the parmesan, salt, pepper and parsley and stir for a few minutes until everything starts to thicken up.

While the risotto is cooking fry up some thinly sliced strips of fake bacon to drape artistically across the clumps of risotto you dish up.
Posted by Michael at 1:11 pm