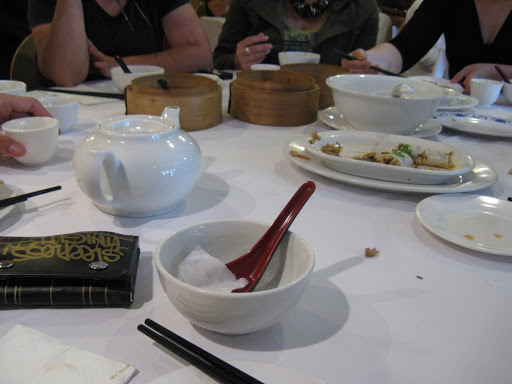 The decadence I anticipated was a Box Hill yum cha meet-up with the vegan potluck crew. Lisa had intended that most of us bike our way there from the inner north, thereby earning this feast. I withdrew early on the basis of my inadequate bike and even less adequate fitness; a few others developed late-hitting ailments (really! I don't think they were wussing out...) and ultimately Lisa and Michael were the only two hardcore enough to take it on. (You can read Lisa's account of their journey on her blog.)
A bike ride is not the only way to develop an appetite for yum cha. Toby, for example, skipped breakfast, and talking food all the way to Box Hill in Kristy's car seemed to have all three of us salivating. Actually, my hunger to visit the Vegie Hut has been growing for over two years; the restaurant's name and address were written by a vegetarian colleague in the farewell card given to me by my former lab in Brisbane. Once there, overwhelmed by the entirely vegetarian menu, I was happy to cede ordering duties to Toby and Kristy. 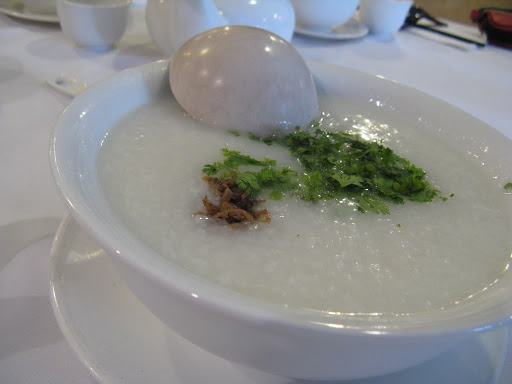 We started with congee. I've never eaten this savoury rice porridge before and was surprised how much I liked it. I think it's free of charge when you order two or more items from the yum cha menu. Each other dish below cost $4.20, and my descriptions are little more than guesses - pipe up in the comments if you know better than I do what I was eating!

Though they were deep-fried and delightfully crunchy, I didn't really take to these faux-seafood balls - the texture was a bit rubbery. 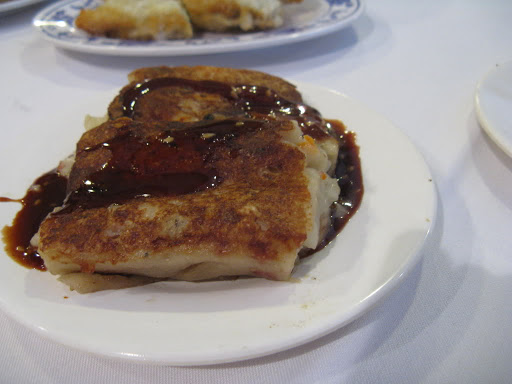 These were more to my liking - mixed vegetable cakes, with a crisp-fried crust and a thick, salty sauce. 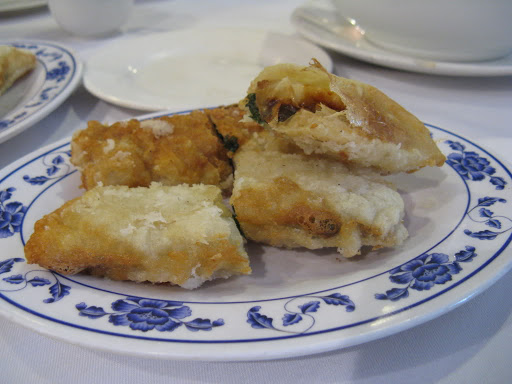 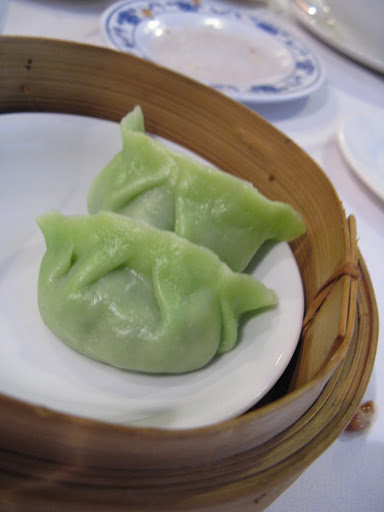 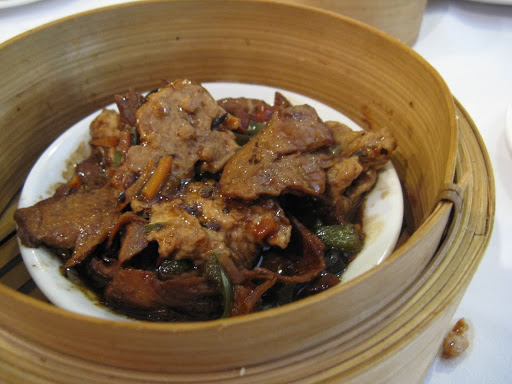 The steamed 'ribs' in black bean sauce were a table-wide favourite. 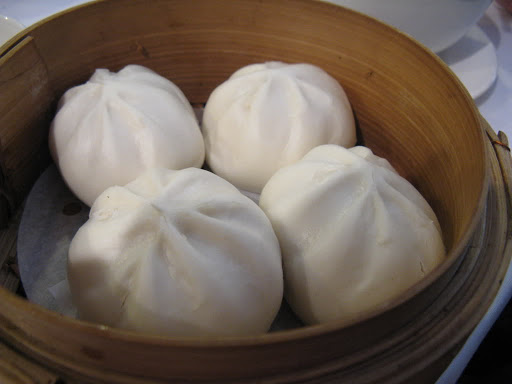 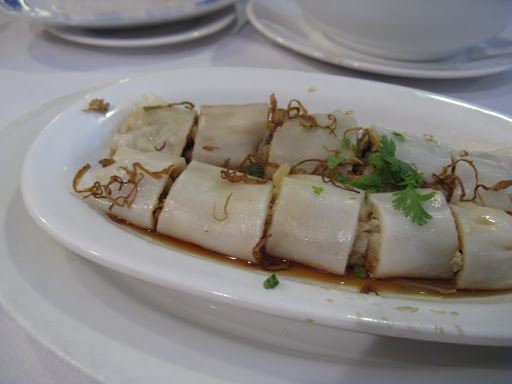 I think this is steamed siew-mai - delicious, but difficult to maneouvre with chopsticks for a clumsy kid like me! 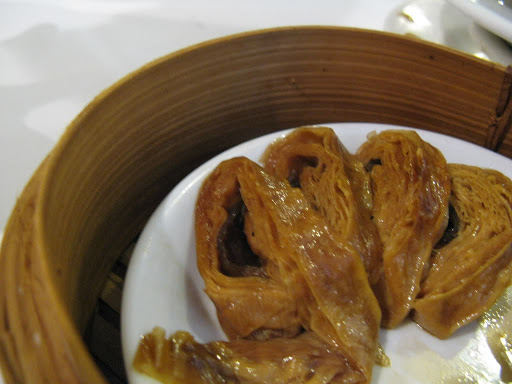 I didn't really take to these - they tasted chemical-y to me. 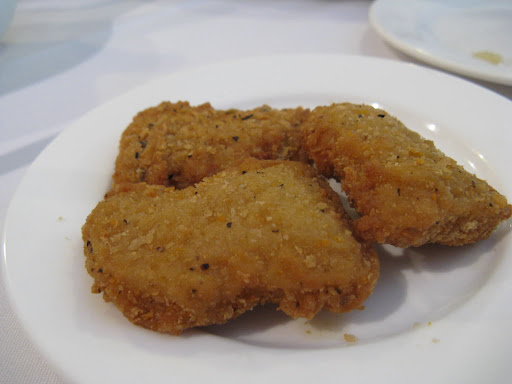 These super-processed nuggets, on the other hand? Awesome. I ate more than my fair share. 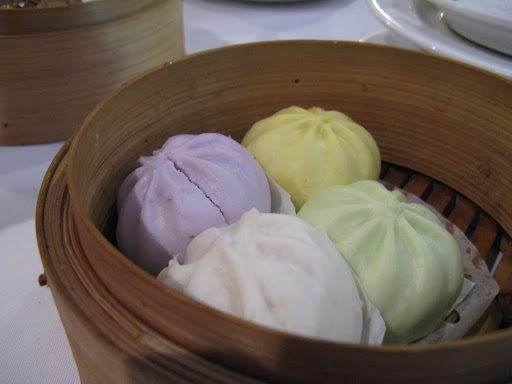 The four season buns each have a different sweet filling - I scored a black sesame one, while Michael chose taro.

With that, we were full. 'Twas a fine feast for about $15 each. But the edible adventures weren't over yet; Kristy next led us to the most functionally named Vegie Bakery. 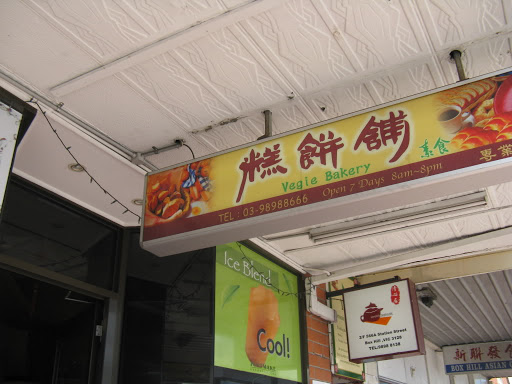 This bakery features the kind of breads and pastries I'm accustomed to seeing through a Breadtop window, though these were all vegetarian! There were plenty of faux-meat specimens, but on Kristy's recommendation I chose this little green tea cake ($2.20). 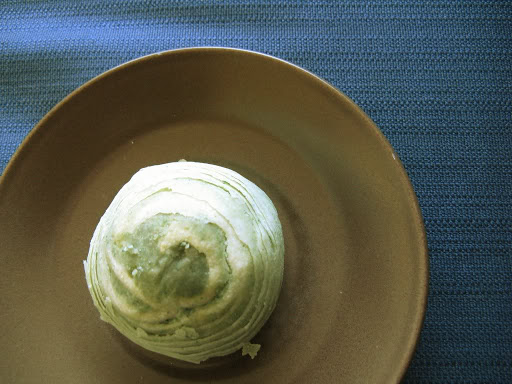 It's not the kind of dessert I usually crave or indulge in, but I was won over by the flaky outer layers and sweet fudgy centre when I later ate it for afternoon tea.
Our final stop was the Golden Age Health & Vegetarian Food Mart for some take-home groceries. Here everyone perused the freezer for faux meats - I wasn't immune, but I also picked up a pack of Toby's favourite ramen and some powdered egg replacer (those salad dressing cupcakes were a timely reminder to try an egg alternative). 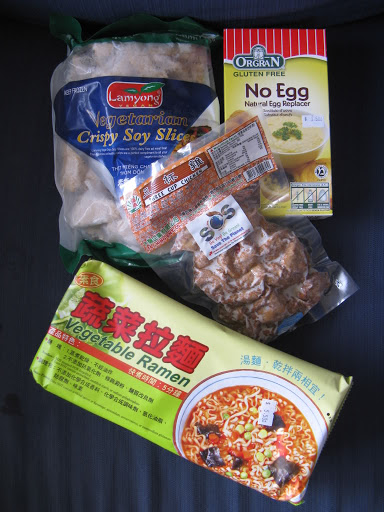 Laden down with frozen goods, we all headed home to our respective fridges. What a treat; to discover a new suburb and its food with a crew of like-minded eaters!
Vegie Hut
Address: 984 Whitehorse Road, Box Hill
Ph: 9898 2287
Website: www.vegiehut.com.au