27/04/2014: Gingerlee has just had a makeover and become The Old Bike Shop Cafe. It seems that some of the same key staff are involved. 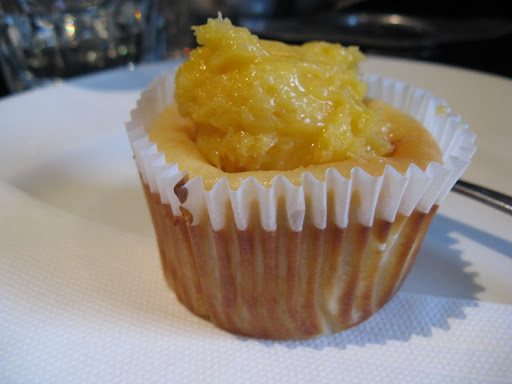 Saturday morning did not have the best of beginnings. Michael and I had a group meeting to get to at 10am and the grey skys, whistling wind, and the late Friday night we'd just had didn't make getting up any easier. The only practical means of travel was by foot, through the rain. We arrived a few minutes early but needn't have bothered - there was no-one around. Not at the front door, nor at the back. We huddled in the covered stairwell and watched heavier rain, then hail, sweep through. By 10:20 we'd agreed that there was no meeting and Michael needed a second breakfast.

Turns out Mike and a couple of his friends were making their way to Gingerlee, so we muscled in on their table. Many of Brunwick's fine breakfast destinations house cabinets of muffins, slices, cookies and other delicacies but when I visit I'm usually seeking something more substantial. Not this time! I was delighted to try a passionfruit curd cheesecake, served cupcake-style. It was a baked cheesecake without a biscuit base - soft and fluffy with a double-tang from the cream cheese and the passionfruit. I'm not sure how much it cost, so I really don't know whether it's good value for money. Washed down with a cup of tea after a morning like ours, I know it was worth every cent regardless! 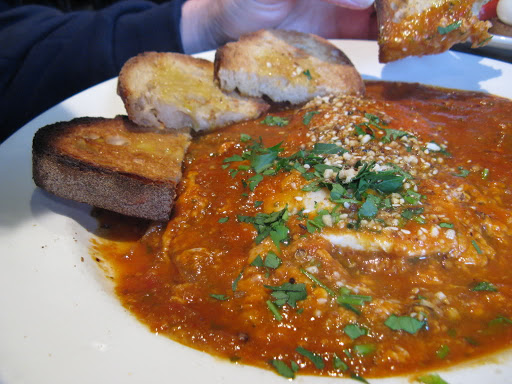 Michael sampled the substantial shakshouka (try saying that three times fast!). At $9.50, it's a generous portion - the Israeli tomato casserole was runny, spicy, and just right for mopping up with bread. However, Michael was less impressed with the baked eggs - it seems that Min Lokal's still reign supreme.

You can read about our previous visits to Gingerlee here and here.
Posted by Cindy at 9:56 am