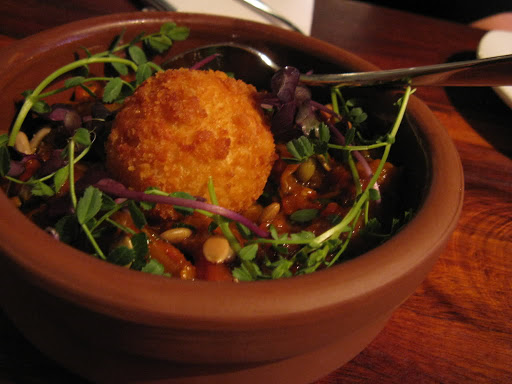 We made a return visit to Baba on Friday night, this time in a group of eight peeps from my workplace. I had my sights firmly set on the mixed dessert plate and planned my savoury courses accordingly - again, the smokey eggplant ezmesi shared around with bread ($5), followed by the sublime spiced pumpkin pide ($14). Meanwhile, Miki ordered the Imam bayildi ($15, above) - a claypot of eggplant and tomato ragu crowned with a deep-fried labne ball. This, like the other non-vegetarian claypots ordered around the table, was not huge and would have benefitted from some bread or couscous on the side. Nevertheless, it was a delightful mix of flavours and textures - Miki loved it, but was generous enough to give me a taste. 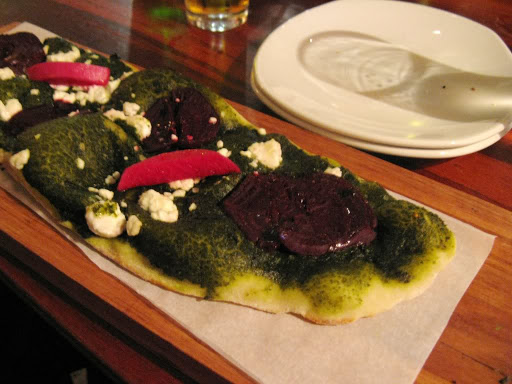 Michael ventured further into the pide menu, choosing a combination of Milawa goats cheese, roasted beetroot, stinging nettle puree and pickled turnip ($14). This was another winner, with Michael singling out the vibrant pickled turnip as the star.


Sadly, Baba's service hasn't been streamlined at all since our last visit. The staff seem perfectly efficient, and I can only assume that there just aren't enough of them on the floor on any given night. Much of my group grew restless as I doggedly waited to catch someone's eye with the purpose of requesting the dessert menu. I zoomed in on the Tatli mezze, which the menu states as requiring a minimum of two people, and bullied Michael into sharing it with me. (I figured other people might want a taste, too, once they saw it!) Then disaster struck - as I excitedly placed the order with our waiter, he said that we couldn't have the Tatli mezze unless everyone at the table ordered it. For us, the minimum wasn't two - it was eight. 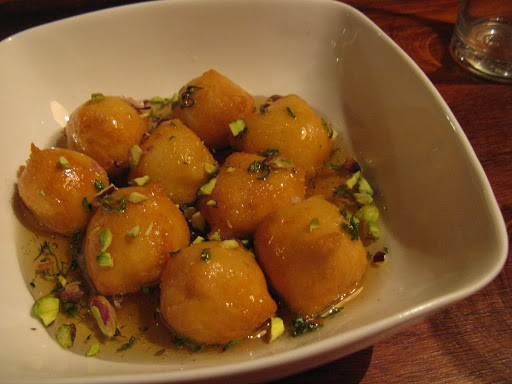 I consoled myself with an order of cinnamon-sugared donuts with pistachio and thyme honey ($8). They took so long to arrive that, even given the other service hitches, I wondered if they'd been forgotten. When the donuts did appear, though, they were super-fresh and hot and there were plenty to share around. I'm not a big honey fan, and there was a lot of it here, but the thyme brought something unique to it.


There's no denying that the food at Baba rocks, but boy is it delayed gratification! Next time I'm up for Levantine on Lygon, I might make a reservation at Rumi.


You can read about our previous visit to Baba here.
Posted by Cindy at 7:50 pm