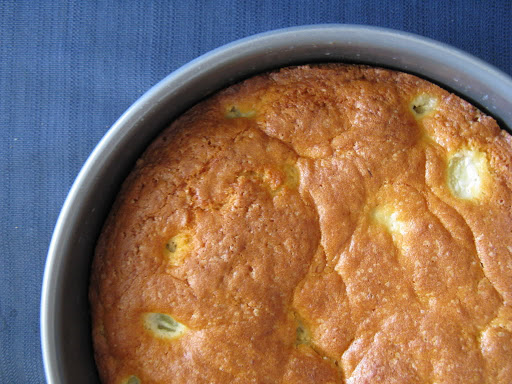 In the week following our annual lab culinary competition, I circulated the collected photos from the event and volunteered to collate a cookbook of everyone's entries. Since then the recipes have been trickling in, and one of the first was one of the most surprising! Lab member Bonnie has been residing overseas for many months but emailed this grape cake recipe as a belated competition entry from afar. It'd be nice, I thought, to make, photograph and share around this cake before finishing the cookbook. And that's what I did when we had a guest speaker on Tuesday afternoon.
The idea of a plain cake with whole grapes suspended within it wasn't exactly rocking my world, yet this was perfect afternoon tea fare. The grapes were so soft that one person asked me if I'd peeled them, and the hints of lemon and cinnamon were just heavenly. Though the recipe suggests garnishing this cake with icing sugar or cream, I'd almost prefer not to - for me, its charm lies in its simplicity.
Grape Cake a la Bonnie's Mum

Preheat the oven to 200 degrees C. Generously grease a springform cake tin.
Cream the butter and sugar. Mix in the eggs, vanilla, lemon rind and juice in turn.
Sift together the flour, salt and cinnamon. Gradually beat it into the cake mixture. Fold through the grapes.
Pour the cake batter into the tin and bake it for about 15 minutes, before lowering the oven temperature to 180 degrees C. Continue baking until the edges of the cake start to come away from the tin (this took a further 30 minutes for me, I think).
Posted by Cindy at 10:33 am