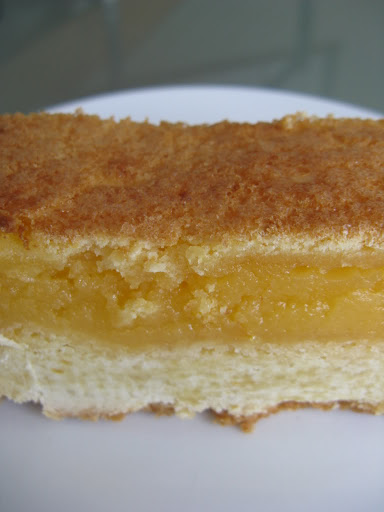 Finally, I present my long-weekend dessert contribution. I hunted through my extensive list of bookmarked recipes for something a little special, different from my usual chocolate-based cakes and cookies, that could still be baked ahead of time and transported without too much fuss. Ellie (aka Kitchen Wench) has done her fair share of baking, so her excitement over this lemon slice had it ranking very highly on my list. The recipe originally comes from Belinda Jeffery's Mix & Bake - you may have noticed that Ellie's having some site problems at the moment, but I've since been able to source this recipe from cakestorm.
I baked this in a much smaller tin than it was intended for. Consequently, the base was rather thick and the lemon topping took far longer to set than the recipe directed. Worse, the base was overcooked and rather tough. The icing sugar and pistachios that Jeffery suggests as a garnish seemed a bit fussy for this weekend away, so instead I just packed a box of frozen mixed berries as a garnish. The overall effect was pretty lip-puckering! Nothing that a glass of milk couldn't fix, mind.
For all that, the lemon topping was actually very, very good; easy to put together (just whisking, no custard-style heating), the right balance of sweet and sour for my taste, and with a delectable sticky golden crust where the slice met the pan. It even won the approval of lemon-dessert-obsessive Jo-Lyn. 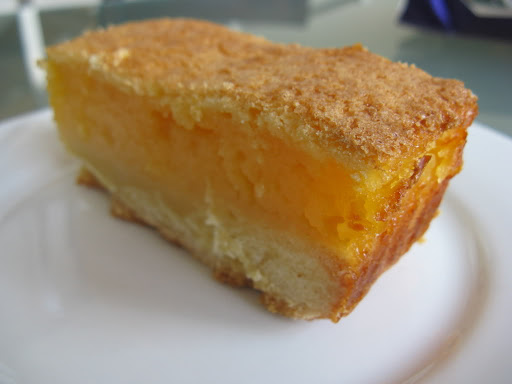 Preheat the oven to 180 degrees C; lightly butter a baking dish and line it with paper.
The base is like a shortcrust pastry. Put the flour, icing sugar and lemon rind in a food processor and pulse to mix evenly. Cut the butter into cubes and add it to the mix, pulsing until the mixture has the texture of breadcrumbs. Trickle in just a little water, and process the pastry until it just forms into a dough ball. Press the pastry dough into the baking dish - I used the back of a spoon to smooth it out. Bake the base for about 18 minutes, or until it starts to colour (this took me a little longer since my base was thick).
Turn the oven down to 150 degrees C, and get going with the topping. Whisk together the eggs and sugar in a large bowl, then the lemon juice and rind, still whisking. Sift in the flour and whisk again. When the base is relatively cool, pour over the filling and return the slice to the oven, this time for 35-40 minutes (more like 50 minutes for me) until the topping is set.
Store it in the refrigerator - you can cut it most neatly while it's cold, though I think it tastes most pleasant at room temperature.
Posted by Cindy at 10:02 pm