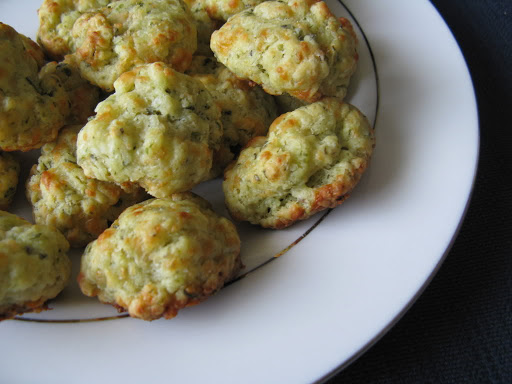 In this week we had a special guest speaker in my workplace seminar series, so I thought I'd bring along some snacks. I've been trying to think of a few things that aren't just cakes or biscuits - partly for variety, but also in the hope that non-bakers in the group might feel comfortable volunteering their services. So I gathered together some dip and crackers and found time left over to try baking these rosemary and cheese biscuits anyway! The recipe is from Anna at Morsels & Musings.
What I didn't notice on first examination of the recipe is that the only wet ingredient in the list is a mere tablespoon of sour cream! I had enormous trouble pulling this dry powdery mix together and ended up doubling the quantity of sour cream. This meant that my biscuits were less shortbread-y (as Anna's were) and more akin to a chewy cookie, though obviously they had a savoury flavour. I also used only about one and a half teaspoons of dough per biscuit for small bites that could be flexibly shared amongst a small or large crowd. (It can be difficult to predict just how many people will turn up!)
Straight from the oven, these were a troublingly compulsive snack - so soft and warm and cheese-flavoured. It was difficult to stop at one test bite (...OK, one test bite per tray! And then one or two more) and save enough for the group. They are not quite as addictive at room temperature but were still met with a warm reception. One audience member whispered "Pass these along - I can't stop eating them!" at a volume that I wasn't supposed to overhear, and a couple of other people requested the recipe.
So, bake these at your own risk. And make sure you can guiltlessly eat them on the spot if you do.
For the recipe, visit Morsels & Musings.
Posted by Cindy at 9:31 pm