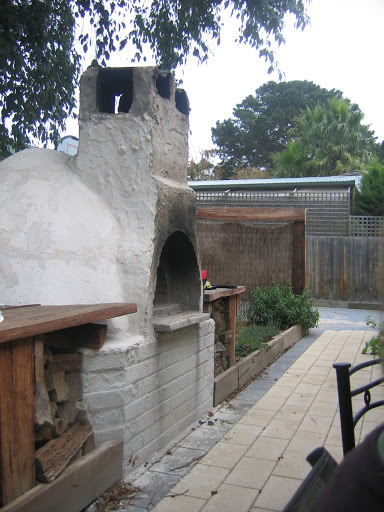 Like moths to a flame, it seems that food bloggers can't resist the glow of an outdoor wood-fired oven. Five months after we congregated around Vegout's hearth, we made the pilgrimage to Purple Goddess' kingdom (queendom? goddessdom?) Chez Fur du Mer. She and her faithful feller Furry provided the perfect setting (as well as last-minute kitchen implements and a whopping slab of emergency lamb) for us to set aside our keyboards and let our mouths do the talking, as well as the eating. 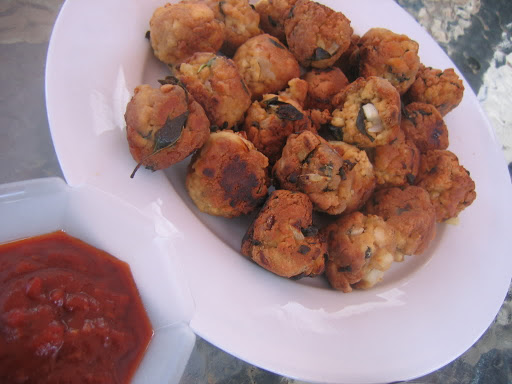 When Claire, Michael and I arrived, not so much fashionably as embarrassingly late, those present looked about ready to eat us alive! Would you believe they were too polite to beginning digging in without us? Thankfully I was able to get a tray of soy bombs in and out of the oven within minutes, and had Chinese style barbeque sauce at the ready for dipping.
Jon has since admitted that when the "Cindy's bringing tofu balls" story circulated earlier in the day, there was some skepticism. And worse, they were messy - crumbling over hands, shirts, and repeatedly into the sauce dish - but I'm confident the "mmm"s they elicited were the product of more than good manners, maybe even more than the relief they provided to empty stomachs. The saucy, salty, succulent reality of the SOY BOMB won out.
With this appetiser out of the way (as if anyone needed one!), we ventured in to the table heaving with food...

Michael contributed his now-signature cream cheese brownies. I must be getting complacent about their chocolatey charms because I failed to photograph them! However, you can drool over them (and perhaps even make them yourself) by going here. 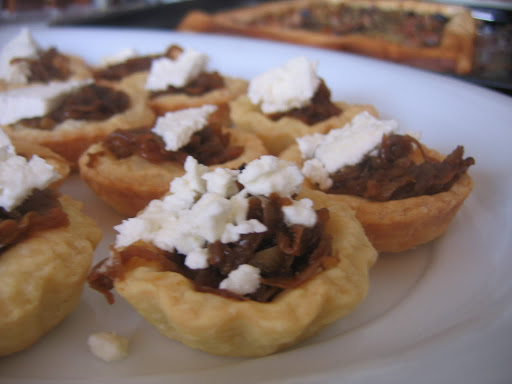 These caramelised onion tartlets were a delicious introduction to Agnes from Off the Spork, since this was the first occasion that we've met her and her husband Alastair. She could not win my heart much quicker than by making her own pastry and sharing it around! 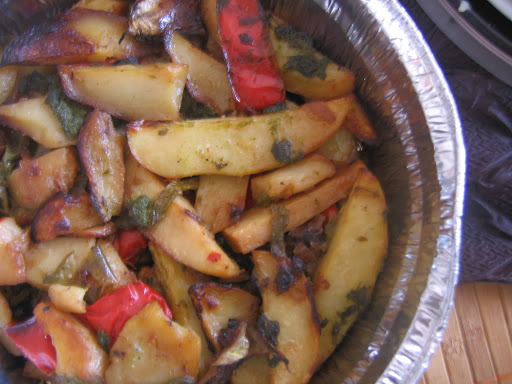 Thanh's version of poor man's potatoes, taken from the MoVida cookbook, was as good as our first taste of them at the restaurant last month. Head over to his food blog, I Eat Therefore I Am, and join us in nagging him to share the recipe! 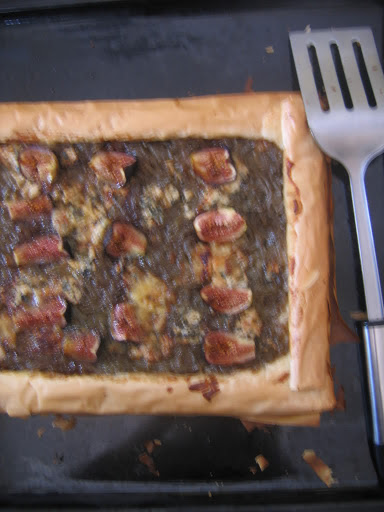 Hostess PG provided the perfect bridge between sweet and savoury with a fig, blue cheese and caramelised onion tart. This was the dish Michael wished for more of after we'd returned home to an empty fridge. 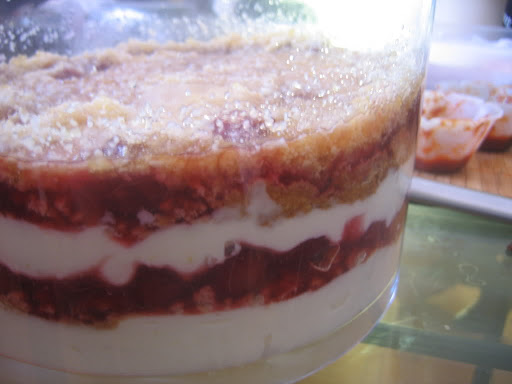 Here is the free-form cheesecake that had us running so shamefully late. It was impossible to be annoyed at it or its creator Claire - look at those layers of mascarpone, sour cherries and macadamia praline! 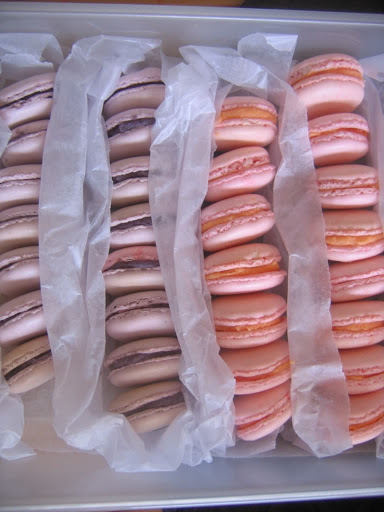 Duncan (of Syrup and Tang) graciously gave the crowd what they were begging for - more macarons! This time he doubled the fun with two flavours - rose/lemon and violet. Once everyone had had their two, an evil game of darting eyes began as people monitored how many more each other person was going back for, and whether or not they might be building up a stash for later. 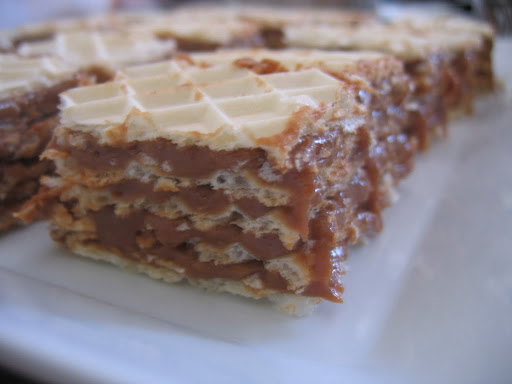 By contrast, the fabulously unconstrained Vida confounded expectation by bringing, not cupcakes, but oblatna! How did she make get those squares so neat and elegant? Is it possible to eat one elegantly, or are my teeth destined to reduce this to a squished mess of wafers, chocolate, caramel and walnuts? 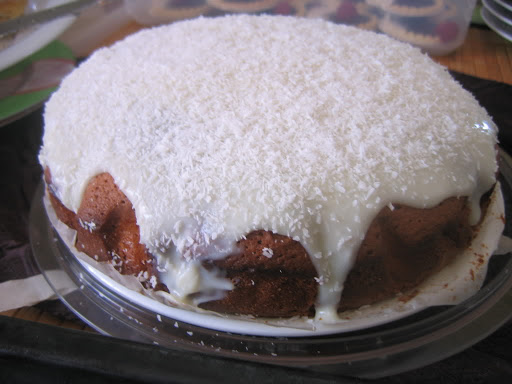 No fan of sugary icing, I took on Thanh's cake with some reservations. But once I sunk my teeth in and discovered that this was white chocolate and not unadulterated sugar, there was no going back! With coconut and lemon also featuring, I still can't work out how it managed to be so buttery and light at the same time. 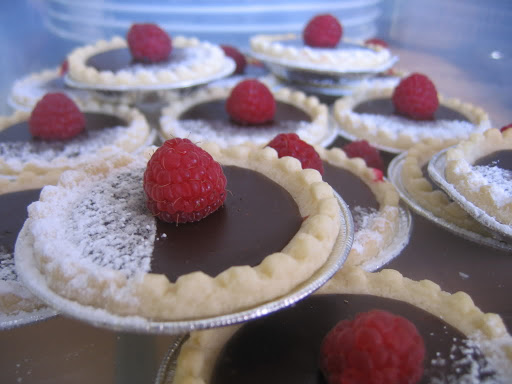 And my final indulgence was a chocolate tartlette from Jon, the Melbourne Foodie. I actually couldn't fit this in at lunch time and took it home with me. With a ganache made from milk and dark chocolate, a hint of orange zest, and a bittersweet raspberry on top, I'm glad I gave myself room to savour its rich and delicate flavours.
It may be difficult to imagine, but the company was even as good as the food! I would never have expected to feel this at ease with a group of people I've met only once before. Though we're an eclectic mix of ages, backgrounds and experiences, a shared love of cooking and eating is more than enough to fuel an afternoon of fun.
Posted by Cindy at 8:28 pm