Update 31/12/2014: Guru Da Dhaba has been closed for ages, and the venue has housed another Indian restaurant or two before being taken over by the highly rated Addict cafe that we've yet to visit. 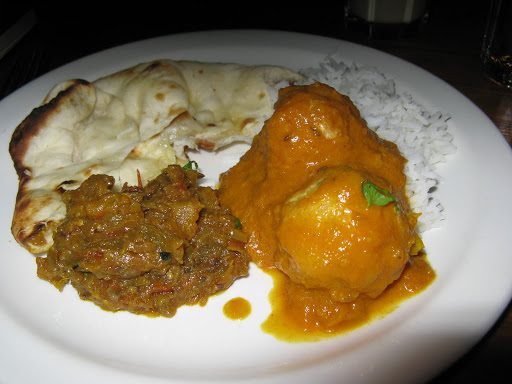 Jo-Lyn's Anzac Day Indian yearnings inspired us on an impromptu visit to Guru Da Dhaba in Fitzroy. Mike and Jo weren't as enamoured with De Orchid as we were, meaning that the quest for outstanding local Indian continues. The smells wafting from the corner of Johnston and Gore streets have tempted me every time I've walked past, but we'd somehow avoided making the trip until after we'd sampled almost every other Indian restaurant in the neighbourhood.

The menu is inspired by the dhaba street eateries of India - vegos are well catered for with 16 curries to choose from (aside: I've developed the theory - following our trip to Red Pepper - that Indian restaurants with beef-free menus are likely to be higher quality. For the record: there's no beef at Guru da Dhaba). Cindy, typically, went for the malai kofta ($9.90). She was a little disappointed with the kofta - it was a little floury and lacking texture. The sauce too was adequate without being particularly memorable. I went for a baingan bhartha - a roast eggplant curry that we really need to find a good recipe for. It was much more impressive than Cindy's kofta - richly spiced and silky, perfect to mush onto the well-cooked garlic naan that accompanied it.

Mike has decided that the real test of an Indian restaurant is its palak paneer and declared Guru da Dhaba's the best he'd bought in Melbourne. So it was a mixed performance: ordinary kofta, excellent eggplant and phenomenal paneer. We might need a second visit to come up with a definitive opinion.