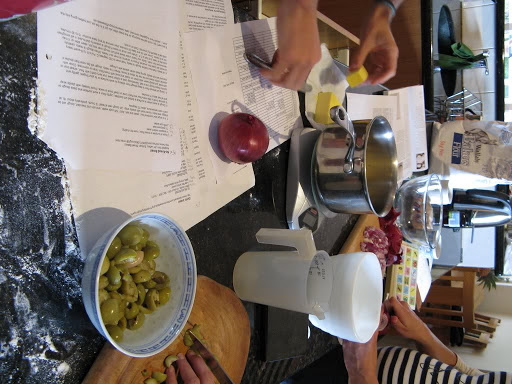 So you know the people I work with are cool, right? Well, their families are cool too.
Stu is the son of one of my colleagues - he was responsible for the muesli, quinoa salad and multi-layered cake we enjoyed at the Prom. He's clearly a fine all-round cook but something he has spent quite some time perfecting is bread baking and all things yeast related. Over the past months, little samples of what he's made have turned up at work for us to taste - white bread, bread with olives, even bagels! But Stu's generosity extends further than sending in leftovers, further even than cooking for our camping trip - he offered to host a bread baking day in his home to teach a few folks the tricks he's learned in the past year or two.
So Cass, Yung and I crossed town on this miserable-looking Saturday to a cosy home with a comforting fire and well-prepped kitchen. Stu had everything at the ready, including a timetable co-ordinating the dough-making, resting, kneading and baking schedules of each recipe. He is the ideal teacher: enthusiastic but never overbearing, meticulous but flexible, and a keen learner himself. Take a look at what we made:

No-Knead Bread. After appearing in the New York Times over a year ago, this recipe circulated the world wide web a good three times, leaving a trail of rave reviews in its wake. Although there's no need to knead, the dough does need a big rest so Stu prepared it earlier... a whole day earlier. By his account this recipe is infuriatingly good, leaving open the question "Why bake anything else at home?" Indeed, this was a fabulous white loaf with a golden crust and soft, open crumb. It was heavenly just dabbed in olive oil when it first emerged from the oven; it was notably firmer but still impressive for breakfast the following morning.

Red onion and green olive rolls. Unusually, this recipe begins by making a roux with the chopped onions before introducing the flour and later the yeast. The resulting rolls are just scrumptious - moist and buttery from the oil that the onions are cooked in, while the onion pieces themselves are so soft, so sweet. Katy and Michael thought they were done after the no-knead bread for breakfast, but one taste of these rolls and they instantly found more space in their stomachs.

Garlic bread. This was the most involved recipe of the day; the first one we worked on and the last one to emerge from the oven. The ciabatta-style loaf is good, but the stand-out element is the garlic. A whopping three heads of the stuff are browned in oil, then caramelised in balsamic vinegar, sugar and rosemary. This was my job and it would be fair to say that the aromas drove me wild with desire. Somehow I managed to save this one for over 24 hours before savouring it with soup.

Five grain loaf. This bread is a real filler, comprising a mix of white, whole wheat and rye flours, along with cooked grains - Stu had pre-cooked lentils, glutenous black rice and boiled wheat grains soaked in red wine all lined up! It's all sweetened with a subtle dose of honey and treacle. I popped my half-loaf in the freezer and am looking forward to thin toasted slices of it, washed down with tea.

Bagels. This was the final, just-in-case-we-have-time recipe. The dough was simple to put together and the resting/kneading stages were quite typical. The key variation is that the bagels are boiled for just 10 seconds before being baked. I initially froze these too but have since rescued them, toasted them and slathered them in avocado, lime juice, salt and pepper. Given how little the recipe deviated from a standard bread I didn't expect much but these were as good as any bagel I've eaten, even in New York.
Naturally I was always looking forward to this day of hanging out with Stu, watching him cook up storm and taking home a bagful of goodies, but I didn't expect to want to make any of these recipes again. Cooking with yeast is just so sloooow and I can always just go to a trendy bakery instead. Having tasted the stunning fresh results I'm now actually quite keen to spend the coming winter weekend afternoons reading, kneading and filling the house with those incredible aromas. 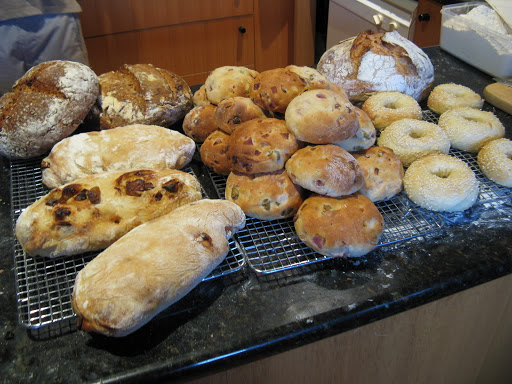