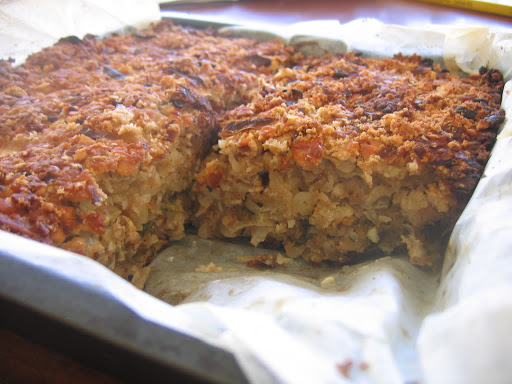 With the arrival of autumn it's time to slip into some comfort food, I think. 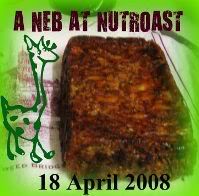 Pastry, potatoes and soup are our favourite ways of warming up, but Johanna has prompted me to start instead with a nut roast. We had some success last year with one of Johanna's recipes so it seemed most sensible to join in her current blog event, A Neb at Nutroast, and try a new recipe. Or, even more daringly, an old recipe.
As I mentioned in passing last time, my first nut roast experience a couple of years ago was not a very pleasant one. I had found the recipe on the website of the Vegetarian/Vegan Society of Queensland and decided to cook it for dinner while Michael was off playing sport. Grinding the breadcrumbs and nuts, zesting and chopping and frying took an awfully long time in our poky little kitchen, and then the roast had to bake for an hour! I barely had the energy to pull together some side veges and I was just about ready to cry when the golden, aromatic loaf came out of the oven and then would not separate from the baking paper. I knew, as I chewed and picked paper fragments out of my mouth, that the roast tasted great, but much time would have to pass before I attempted that again.
By now I felt about ready to conquer the stuffed white nut roast, and it proved much easier with Michael at home to assist. He chopped and sauteed while I operated the food processor, and we both mixed and layered and patted it all down. I took extra care to grease the baking paper well, and the roast slid out of it beautifully. It's a very nutty roast indeed, not too stodgy when sliced thinly, brightened with flavours of parsley and lemon. The golden, chewy crust is delicious when it's fresh from the oven but it softens later. Although it doesn't resemble meat at all, the crust and stuffing both reminded me of long distant roast chickens.
We ate this roast on that first night with fresh spinach, sauteed mushrooms and capsicum, and a generous splash of gravy. Since then I've been enjoying it on sandwiches with more spinach leaves and a dab of mayonnaise. 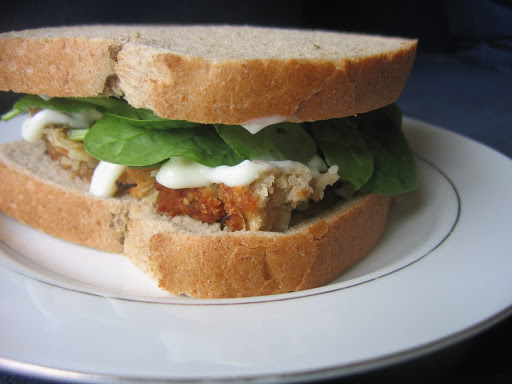 Stuffed white nut roast
(taken from the Vegetarian/Vegan Society of Queensland website, attributed there to Vegan Feasts by Rose Elliot)

Preheat the oven to 190 degrees C. You will need a huge bread loaf tin or two smallish loaf tins. Line with baking paper and grease thoroughly.
Heat 2 tablespoons of the olive oil in a large saucepan and fry 2 of the onions, covered, over low heat for about 10 minutes. Stir them occasionally. The recipe emphasises not allowing the onions to brown at all, but I can't see the harm! I think it's about keeping the roast white. Stir in the flour and then, once it's evenly distributed, the water. Keep cooking and stirring until the mixture thickens.
Take the mixture off the heat. Add the nuts, 225g of the breadcrumbs, lemon juice, salt, pepper and nutmeg.
In a separate bowl, mix together the remaining ingredients: oil, onion, breadcrumbs, lemon zest, dried herbs and fresh parsley.
Pat about half of the nut mixture into the loaf tin(s) and smooth over the surface. Next, spoon over all of the stuffing mixture from the bowl. Finally, layer on the remaining nut mixture and flatten the top gently with the back of a spoon.
Bake the nut roast for about an hour, until lightly browned on the outside and firm in the middle.
Posted by Cindy at 8:25 pm