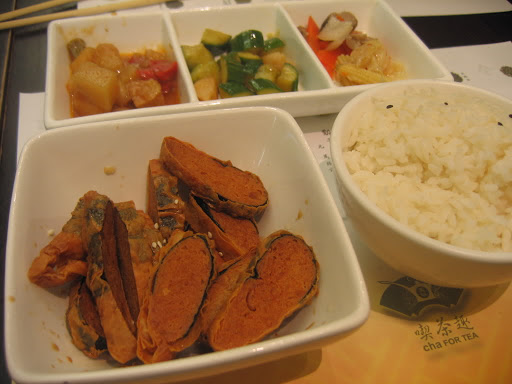 Some comments banter over at She's a Screaming Suffragette had filled Cindy with enthusiasm for a return to Ten Ren's Tea Time. I'd got over the scary beefiness of their faux-beef rendang curry and decided that it worth trying their highly recommended vego fish dish. Cindy concurred and, for once, we both ordered the same main - the vegetarian lemon fish with rice ($8.80). I had visions of something saucy like the 2007 vego dish of the year at White Lotus. Instead, we got a bowl of plain rice, three small vegie accompaniment plates (some sort of cubed potato, cucumber and a cabbagey mush) and a serve of dry 'fish' slices. The 'fish' had a hint of lemon and some vaguely seafoody saltiness, but it was so dry that it really didn't go well with the rice - I had to spread the accompanying dishes pretty thinly to flavour up the rice enough for my tastes. To be honest, I can't really see the appeal of this fish-dish - it's dry, only lightly flavoured and not particularly fishy. Ah well, it was worth a shot. 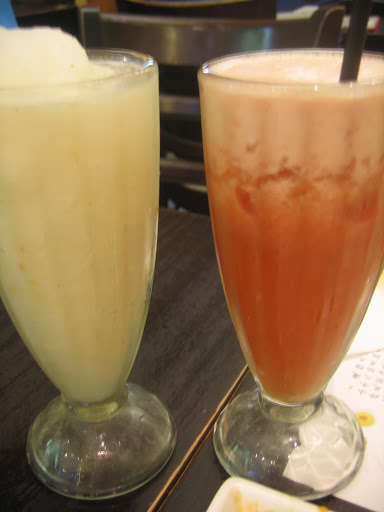 Of course we couldn't visit Ten Ren's Tea Time without sampling some of their eighty million varieties of tea. We both went for ice teas - the lychee green tea for Cindy ($5.50, on the left) and the watermelon green tea ($5, on the right) for me. Mine was lightly sweetened with a hint of watermelon-y flavour, which didn't overwhelm the essential tea-ness of the drink. Cindy's lychee tea on the other hand was so strongly lychee flavoured that a couple of sugary sips were all I could handle. Cindy didn't seem to mind it too much though.


I think we've probably done our dash with Ten Ren now - there are too many other cheap CBD food options.

Read about our previous visit to Ten Ren's Tea Time here.
Posted by Michael at 8:26 pm