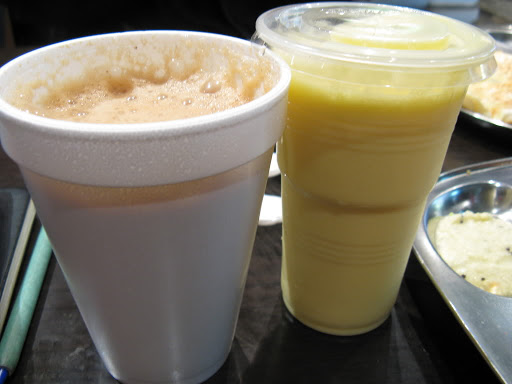 Ever since we purchased our first Melbourne Cheap Eats Guide and read about the 29 different types of roti, we've been intending to try out Bismi. Somhow, even with the added convenience of a city shop, we'd failed. Finally the need for a speedy pre-theatre dinner gave us the motivation we needed to make our first visit. It's set in a fairly desolate section of Elizabeth Street, but is a pleasant, welcoming venue - lots of crowded tables, Bollywood film clips playing on a tv and a long queue snaking away from the front counter.

Cindy and I stood off to one side and gave the menu our attention, quickly settling on two different types of thali. It was only once we'd made it to the front of the line that we realised that the thalis were a lunch only phenomenon. So it was back to the side to study the menu some more. We made our decisions and rejoined the line, but my hopes were dashed once more when I was told that the palak paneer was unavailable. Curses. Rather than go through the whole cycle again, I quickly settled on a simple mixed vegie curry ($5.50) to go with my masala roti ($4). Cindy couldn't resist a vegi dosai ($5.50), so neither of us sampled their 'famous' pizza dosais. Maybe next time. I had the standard mango lassi to drink, while Cindy was more adventurous and ordered the tea tarek (tea made with condensed milk - she wasn't adventurous enough to try the traditional Horlicks or hot milo that were also on offer). 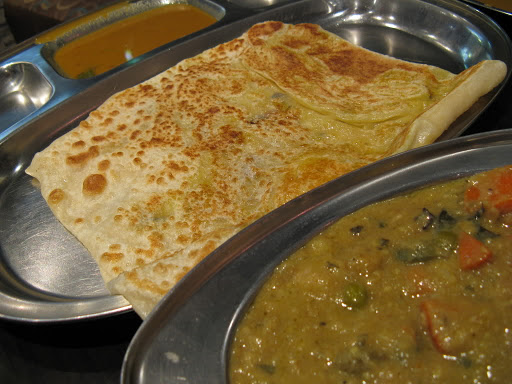 My masala roti came out on a silver tray, with a puddle of spicy sauce for dipping. I was glad I'd ordered the vegie curry to accompany it, as a single roti would probably have left my stomach growling in the theatre. The curry was pleasant - slightly creamy and sufficiently spicy, with clearly identifiable vegies in the mix rather than the generic 'vegetables' that you sometimes get in a mixed vegie curry. The masala sauce with the roti was a warmer flavour, and still quite spicy. The roti itself (which was nicely cooked, and not quite as oily as some of the other rotis we've had around town) had some work to do, just about managing to soak up all the saucy flavours. 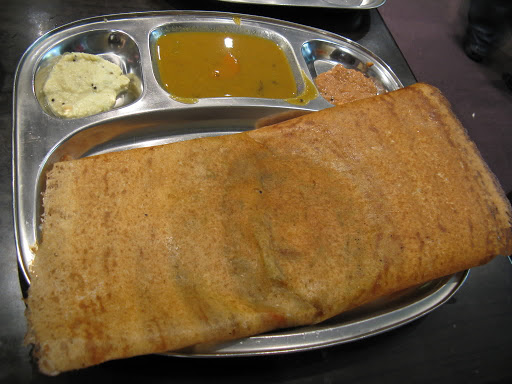 Cindy's dosai was the standard package - a big crispy pancakey thing stuffed with lightly spiced vegies, with some sambar and a couple of chutneys for flavouring. The filling was mostly potato, which was just what Cindy was after and, although one of the chutneys was a bit spicy for her, she polished off the rest happily. I'm always a bit disappointed when we order a dosai somewhere and it isn't a metre and half long, but that's probably a bit unfair. 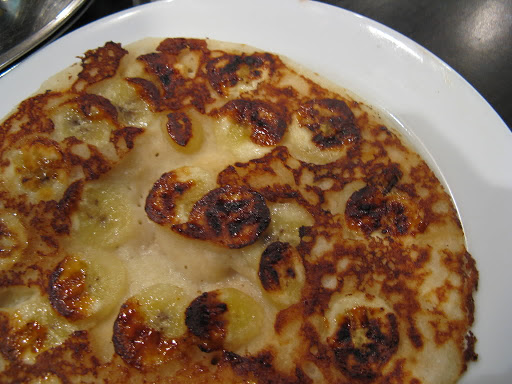 Despite polishing off her dosai, Cindy was hungry enough (and we had enough time before The 39 Steps began) to sample something from Bismi's fairly substantial dessert menu. She picked out the banana uttappam ($5) - a sweet dosai cooked with butter and served with caramel sauce. Cindy rejected the offer of chocolate sauce, but soon regretted it - the dosai on its own was a little on the bland and floury side, and the whole thing was dense and filling. In the end, she picked out the caramelised bits and enjoyed them, leaving large chunks of the pancake behind.

Realising that our time was running out we scurried out the door and onto a tram, our stomachs filled with a fairly satisfying and remarkably cheap Indian feast. Now if someone can just explain what a Gold An Fork is...