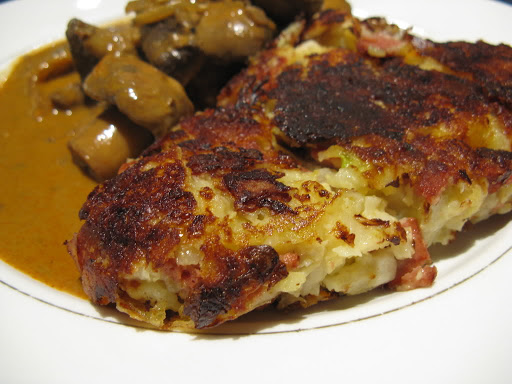 Dinners of knishes and bangers and mash yielded extra shredded cabbage and mashed potato. I figured that they could easily be transformed into some kind of patty, and a wander around the internet produced this recipe, Hugh Fearnley-Whittingstall's version of the Irish peasant food colcannon. Though I wasn't aware of it at the time, the chopped deli slice I added to the mix was entirely consistent with the traditional addition of boiled ham or bacon.
It was a struggle to keep the mixture together in one piece, but of course the crumbling edges didn't affect the taste at all. Paired with mushroom paprikash, it was a fine, warming winter meal.
Posted by Cindy at 7:41 pm