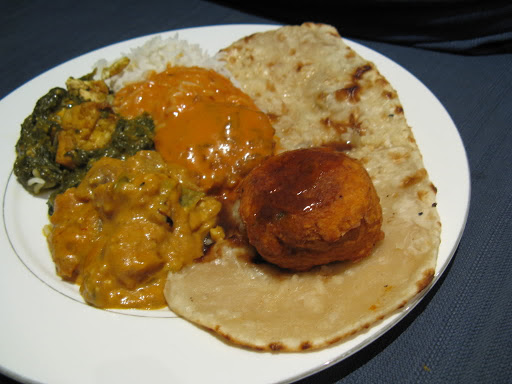 Monday night looked like a good one for De Orchid takeaway, so I gave them a call as Michael walked home. Unfortunately their phone went unanswered, eventually returning a message that they were closed due to unforeseen circumstances for a week or two. Darn. It seems that someone else was having the very same conundrum, finding our blog via a google search for indian delivery carlton melbourne just eight minutes after they searched for "de orchid" carlton! I wonder if they tried the Balti Indian Cafe as google recommended? Instead I took a look at our fridge, papered with takeaway leaflets as it is, and chose the Classic Curry Company.


Michael and I first sampled the Classic's curries even before we moved to Melbourne. We were lodging nearby while attending a conference and had somehow heard of it as a local purveyor of cheap and cheerful Indian food. Like Red Pepper, it was an unadorned fit-out filled with members of the local Indian community, and big pots of curry going at very cheap rates. If memory serves, I think we paid only $6-6.50 for a vegetarian curry and rice! The prices are higher now, though $7.50 still seems a reasonable asking price.


With orders over $25 scoring free delivery, we were almost obliged to buy up big - a serve of pakora (2 for $2), vegetable kofta, palak paneer, vegetable korma and two garlic naans ($1.50 each). The pakoras, rather than being the battered whole chunks of vegetable that I expected, were deep-fried balls of vege mush. They didn't impress me much, though the tamarind dipping sauce brought out the best in them. The naans looked pretty flat and lifeless, but did actually reveal some flakiness once I started tearing in. The palak paneer had a mild, salty flavour with the spinach served near its natural texture rater than pureed. The kofta were quite good and the tangy sauce had a little kick. I expected little of the korma, but its sweet sauce won me over at first bite.

This is not nuanced cooking, and I had wondered if the Classic Curry Company's meals would live up to the slightly higher prices they're now charging. These curries definitely did, well exceeding my (fairly low) expectations and making our Monday night in a cozy one.