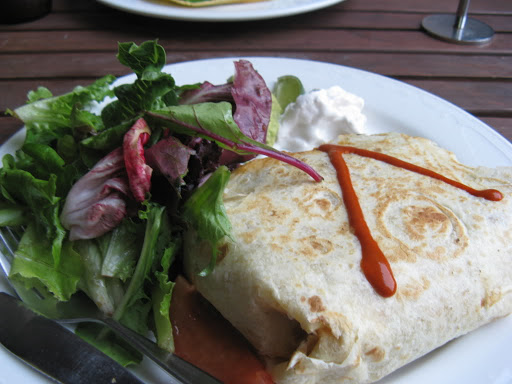 Time for an East Brunswick Club update! We received information last weekend from a trusted source that the EBC has a few new vegan-friendly meals to try. For starters, their $10 Monday meals are now followed up with Mexi Night on Wednesdays. This completely veganisable menu features jalapeno poppers (battered, deep-fried, stuffed with fetta and rice, served with guacamole), spiced Mexi fries (served with more guacamole and sour cream), a taco plate, a burrito plate, nachos and chilli fries as well as a few of their usual favourites - traditional, nacho and Americana parmas, vegan fish & chips, vegan chicken salad, wedges and chips.


Michael had a shot at the vegan burrito plate ($15, pictured above). It's described thus: "Char grilled chicken, cheese, rice, black bean chili and chunky salsa, wrapped in a 12-inch wheat tortilla. Served with a side salad, guacamole and sour cream." We assumed that the vegan alternative to chicken might be some seitan chunks, but instead he found zucchini and eggplant. 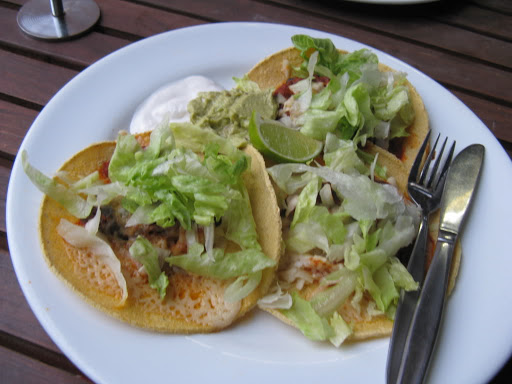 I chose the vegan taco plate ($12): "3 soft or hard-shell taco's filled with beef, black bean chili, chicken rice, cheese and shredded lettuce. Served with a side salad, guacamole and sour cream." Again, the EBC refrained from their usual tendency towards faux meat, filling this out with just the bean chili and rice. There was some faux dairy to be had, though, with excellent 'cheese' and sour 'cream' on offer.

Both meals were enjoyable, though they were little more than rearrangements of the same ingredients, and offered similar value for money as Mi Corizon up the street. On a less lazy evening we could probably do as well for ourselves at home (though we might not be able to replicate the jalapeno poppers or Mexi fries also on offer!). I'm more inclined to return for the $10 Mondays, or for one of their current specials - the vegan chilli burger and and vegan Philly style cheese steak (available for a limited time on other nights) sound incredible!

(You can also read about our first, second, third and fourth visits to the East Brunswick Club.)
Posted by Cindy at 8:22 pm