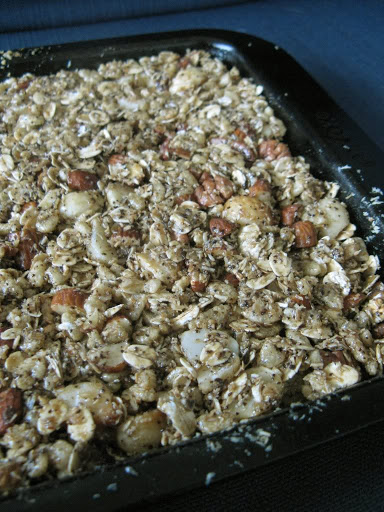 Again we elected to spend the Labour Day weekend at the Golden Plains music festival. With a total fire ban in place and no camp stoves allowed, it was inevitable that we'd rely largely on the food stalls. This wasn't quite a dismal as it sounds - the menu was almost identical to last year's and for the most part we happily gulped down roti wraps, vegie burgers smothered in hot sauce, mango juice, and nutella-berry crepes. But come breakfast time, whether it occurred at 8am or 1pm, a chunky home made muesli bar was worth its weight in gold.
The muesli bars that we ate were concocted a couple of days early, and based on Heidi Swanson's recipe for Big Sur power bars. Though the recipe initially reminded me of the bubble slice I've eaten (and adapted) so many times, they're actually quite a different proposition. The rolled oats make them more chewy and filling, and though I would never have recognised the coffee in a blind taste test, it adds a terrific and unique depth of flavour. What this recipe does have in common with my bubble slice is flexibility of ingredients: there's a whole host of sweeteners, cereals, nuts and seeds that you could try substituting. My own choice of ingredients meant that I could prepare these entirely from ingredients already in our pantry!

As I stirred together the mixture I worried that it might not hold together (tip: press it into the baking tray using a fork, not a spoon!) and I stuffed it into the fridge overnight. This proved to be unnecessary, and actually made cutting it into squares much more difficult. Unless you're in a very warm place, you can probably keep this away from the fridge altogether.


Preheat the oven to 180°C. While you're waiting, chop up the nuts, then bake them for 5-10 minutes, stirring once or twice. When they just begin to colour, add the coconut and bake for a further 5 minutes, stirring once more along the way. Take it out to cool when everything's golden. Transfer the toasted nuts to a bowl and stir in the rolled oats and rice bubbles.
In a small saucepan over medium heat, stir together the rice malt syrup, sugar, salt, coffee and vanilla. Bring the mixture to the boil, still stirring, and allow it to thicken a little before taking it off the heat. Pour it over the cereal/nut mixture and combine everything thoroughly.
Lightly grease a baking tray and pour the mixture into it; I found the back of a fork most useful for smoothing over the top. Allow the mixture to cool to room temperature (don't refrigerate it!) before slicing it into chunks.
Posted by Cindy at 6:32 pm