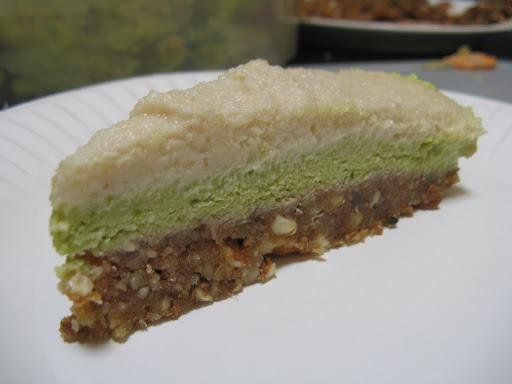 While I have my reservations about raw foodism as a lifestyle, I love a theme and I was as eager as anyone to experiment and contribute a dish to Bec and Jo's raw-themed vegan potluck. The internet is flooded with recipes and ideas, and I had a couple of constraints up my sleeve to narrow down the options. Like many people, I don't own the most popular appliances amongst raw foodies - a juicer, a dehydrator and a mandoline. However I do own a much-loved and much-used food processor and it was the perfect ally in making this raw lime pie - all you've gotta do is pulse and pour, three times.

What this recipe lacks in processed sugar and carbs, it makes up for in sweet fruit and rich nuts. The base layer consists mostly of dates and walnuts and has a deep, caramel flavour. In the middle is a super-tangy lime strip, filled out with creamy avocado and cashews. On top is a macadamia cream, sweetened with agave nectar, that tastes remarkably like coconut. Freezing the pie proved to be an excellent strategy - it was easy to transport and after 20 minutes or so on the bench, it held together in nice firm slices. Served semi-frozen, it makes a serious rival to most of the cheesecakes and icecream cakes parading the planet. For a summertime dessert, I'd make it again in preference to either of these. It's not just a great raw dessert, it's a great dessert.

Unfortunately, raw lime pie doesn't come cheap - a basket full of dates, limes, avocados, cashews, macadamias and agave nectar is more likely to have you reaching for the a credit card rather than the change purse. Thankfully a small wedge goes a long way, and this quantity will easily feed a dozen people.
It turns out that there are plenty of raw dishes that match this terrific pie bite for bite! The potluck was kitted out with a juice and smoothie bar, zucchini pasta, a fantastic satay sauce without peanuts poured over lettuce salad boats, mock tuna parcels, smoky Middle Eastern nut cheese, gado gado, toffee and trail mix slices and Ferrero Rawchers (Kristy and Pip have dutifully recorded them all). It was food that left me sated and definitely not bloated. I've no reservations about going raw a little more often if it means I have this much room for dessert! 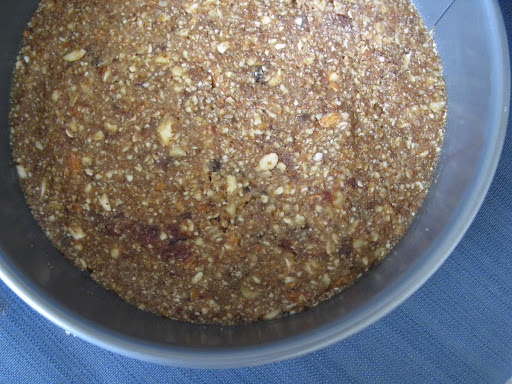 For the base: In a food processor, combine 1 cup almonds, 2 cups walnuts, 1 cup dates, 1/3 cup sultanas and 2 tablespoons fruit juice. Blend them until soft and crumbly and press them into the base of a springform tin or pie dish. Store it in the refrigerator or freezer. 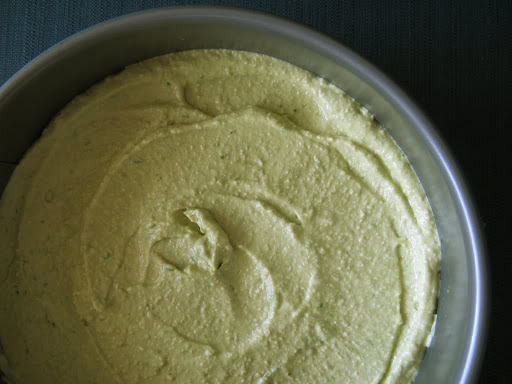 For the lime filling: In a food processor, blend together 1 large or two small avocados, the juice and zest of four limes and 1/2 cup of raw cashews. When the mixture is smooth and creamy, pour it over the base and smooth the top with a spoon. Return the pie to the refrigerator/freezer. 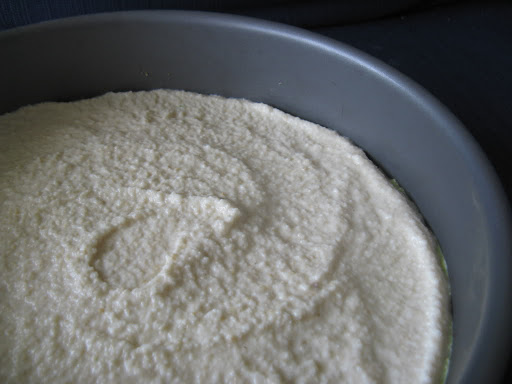 For the top layer: In a food processor, blend together 1/2 cup water, 1 cup macadamia nuts, 1/4 cup cashews and 3 tablespoons agave nectar. When it's as smooth as possible, pour the macadamia cream over the pie and smooth over the top with a spoon. Return the pie to the refrigerator or freezer until firm.
Posted by Cindy at 12:04 pm